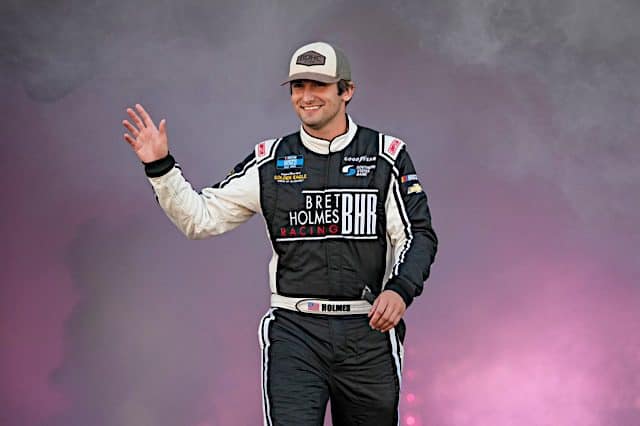 On Oct. 1, following the chaotic end of the NASCAR Camping World Truck Series race at Talladega Superspeedway, two drivers waited anxiously for NASCAR to review the finish and determine the winner. No matter how the call went, a first-time winner was in store.

For the beneficiary, Matt DiBenedetto, he was finally able to get that elusive first win — not just in the Truck series, but in his entire NASCAR career. For the loser, Bret Holmes, the loss was much more than just his first career win. It was a chance to win at his home track.

So who exactly is Bret Holmes and how did he come within feet of taking a shocking win at Talladega?

The Munford, Alabama native first entered the national scene in 2016, running seven ARCA Menards Series races for his family-owned team, Bret Holmes Racing, finishing top 10 in all of them except the season finale at Kansas Speedway.

He would end up full-time in ARCA in 2017, finish sixth in the season standings with a best finish of fourth, twice.

He started out the 2018 season full-time, but ended up only running four of the last 10 races of the season, three with Ken Schrader Racing.

In 2019 and 2020, Holmes went back to full-time for his own team. In 2019, he finished third in the season championship, but it was 2020 that proved to be a breakout year for Holmes. He earned his first career win at Kansas, leading 82 of 100 laps en route to winning the ARCA championship. Only one finish (Phoenix Raceway) was outside of the top-10.

The following season, Holmes and his team dipped into the waters of the Truck Series. Driving the No. 32 (inverse of his ARCA number, No. 23, because GMS Racing owns the number), he attempted eight races, qualifying for all but Nashville Superspeedway. His best finish of the season was 11th at Las Vegas Motor Speedway.

Which brings us to 2022. The team planned to enter 10 races, with Holmes driving all of them. Although two planned races, Circuit of the Americas and Charlotte Motor Speedway, ended up not happening, two different races, Mid-Ohio Sports Car Course and Bristol Motor Speedway, were added, albeit with Connor Mosack behind the wheel.

That left Holmes with eight races, like last season. Although he failed to qualify for Nashville again, he improved his best finish to eighth, again at Las Vegas. The rest of the season was rather forgettable for Holmes.

Until Talladega, that is.

See also
Did You Notice?: The NASCAR Struggle for Power Is Real. Can It Be Stopped?

A best-career finish, sure, but definitely could have been better. And even more unfortunate was the fact that Talladega was the last planned race Holmes and Co. had this season.

With 2023 just around the corner, Bret Holmes Racing has not announced any schedule of races. As the team has little funding (Holmes actually works full-time to provide funding), it presumably won’t be a full-time schedule. But one could only hope that he at least returns to Talladega again to get revenge on the track that he calls home.