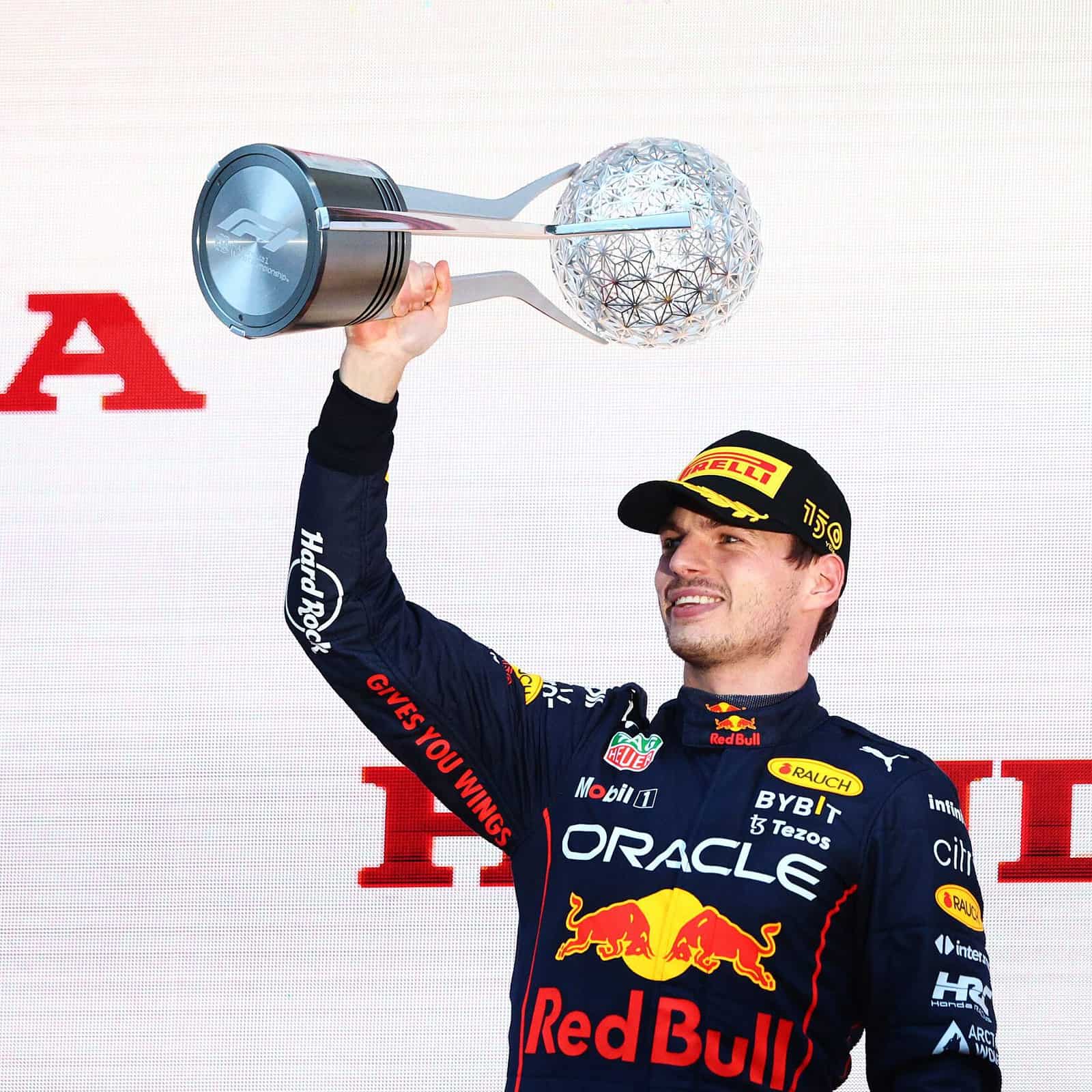 Max Verstappen dominated and won a wet and bizarre 2022 Japanese Grand Prix, and was declared 2022 World Drivers’ Champion in confusing fashion that seemingly went against the FIA rulebook.

Charles Leclerc and Sergio Perez had a furious battle for second that came down to the final chicane, where Leclerc went off while trying to defend Perez and then came back to beat Perez to the line without losing second. Leclerc would be given a five second penalty and would finish third while Perez ended up second to Verstappen by 27 seconds.

Because the race only went 28 of 53 laps, theoretically the rulebook states that there should be a modified point system in place that awards 19 points to the winner, 14 to second, and 12 to third. Under this system, Verstappen would leave the land of the rising sun up 111 points, leaving him one point shy of the 112 point minimum to clinch. But the FIA awarded points on its typical 25-18-15 system instead, clinching the championship for the Dutchman, due to the race seeing a checkered flag, not ending on pit road with time expiring.

We resumed the race, so according to the rules full points can be awarded. That makes Max champion. So confusing #F1 #JapaneseGP

“Wow, what can I say?” Verstappen exclaimed in what will be an often replayed clip in which former F1 race winner Johnny Herbert, as part of his duties as the post-race podium interviewer for F1 Media, informed him for the first time that he was champion once again. “Very special also to do it here, in front of all of the Japanese fans. Incredible.”

Verstappen then ran from the interview area to embrace the Red Bull team members gathered outside of parc ferme nearby.

“I think Max’s title this year was a matter of time, really.” Leclerc said in his own F1 Media interview while Verstappen celebrated with his team. “We expected him to win the world title, and now we can use these last races to become a better team. And hopefully, put in more of a challenge next year.”

On lap one, Sebastian Vettel spun out in the first turn at the start after colliding with Fernando Alonso. Both drivers were able to continue on with little-to-no damage, with Vettel ultimately nipping Alonso at the line by 0.011 seconds for sixth.

Carlos Sainz then spun out coming out of the hairpin turn 11 and stalled out. Alex Albon made it not much further before pulling off after failing to get out of second gear in his Williams, not making it to turn 13 on the first lap. These retired cars caused a full safety car, and the lack of vision due to the spray being generated from the cars forced a red flag.

During the red flag start, Pierre Gasly first hit a sign that had come onto the track and couldn’t see, then almost hit a tractor that was on-track attempting to begin the clean-up process. This brought mounds of condemnation from many in the sport during the red flag, with several drivers tweeting about their disapproval, especially after a statement from the FIA seemed to put more blame to Gasly than to themselves. This incident will be under review and may lead to rule changes in the coming offseason.

Pierre Gasly was furious after he passed a recovery tractor that was on the racing line in terrible visibility 🤬 pic.twitter.com/ObGzakycvE

At 50 minutes after the start of the race, the red flag was about to finally be lifted before the rain came down even harder and caused the start to be delayed again. Finally, two hours and 15 minutes after the start of the race, the flag was lifted and went under the safety car with 45 minutes remaining in the race. After a couple of laps, the safety car came back in and it was a race to the end of the FIA’s three hour clock.

In spite of a lot of spray, the rest of the race ran incident free to lap 28.

Esteban Ocon held off Lewis Hamilton in a brilliant 15 minute duel for fourth, with Hamilton having to settle for fifth. George Russell struggled in the rain in comparison to his teammate and finished in eighth.

Nicholas Latifi finally got his first points of the season by virtue of finishing ninth, while Lando Norris did damage control for McLaren’s campaign for fourth place in constructor points by finishing tenth for the last point.

Next up for F1 will be the United States Grand Prix, airing from the Circuit of the Americas on Sunday, Oct. 23 at 3:00 p.m. ET on ESPN.