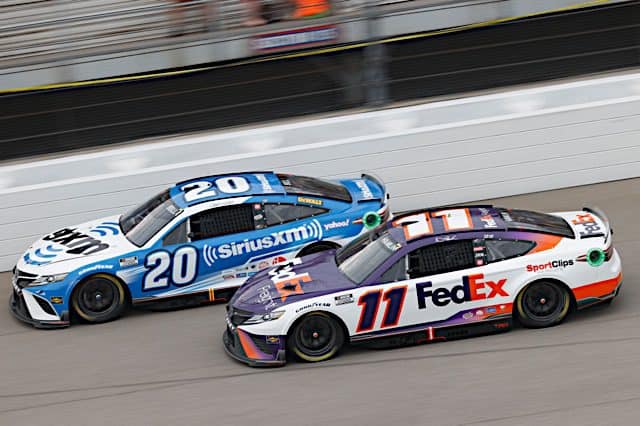 With Cole Pearn’s retirement at the conclusion of 2019, Martin Truex Jr. had to prove he could remain elite without him, as Pearn had been with him for 24 of his 26 NASCAR Cup Series wins at that point. 2020 was Truex’s first season with James Small, and while he led over 900 laps, the No. 19 team was only able to find victory lane once.

Truex silenced doubters in 2021, as he won four races and finished runner-up behind Kyle Larson in the season finale at Phoenix Raceway. 2022 has been a different story, however, as Truex missed the playoffs after failing to score a win in the first 26 races.

But despite missing the postseason, Truex ended the regular season fourth in points. He has led 456 laps this season and holds the second-best average finish of all drivers. Even if the pairing has failed to reach victory lane this year, they clearly have shown the speed to do so.

Nevertheless, strategy has been a weakness for the No. 19 team this season. At Las Vegas Motor Speedway, Truex was running second when a caution came out with less than five laps remaining. Truex and his Joe Gibbs Racing teammate Kyle Busch elected for four tires while Alex Bowman and Kyle Larson took two; Bowman went on to win while Truex was only able to make his way up to eighth.

At Nashville Superspeedway, Truex was running fourth before another late caution flag brought all the JGR cars down pit road. Had he stayed out, he would’ve restarted on the front row with Chase Elliott. Instead, Truex and his JGR teammates were mired back in the pack, and he ended up in 22nd after contact in the closing laps.

The biggest missed opportunity of all came at New Hampshire Motor Speedway. Truex won the pole in qualifying, which was his first Cup pole since 2018. He had a rocket ship for the first two-thirds of the race, as he led 172 of the first 206 laps. But as the field came down for the final round of pit stops on lap 207, the No. 19 team elected to take no tires. That ended up being the losing strategy, as all the cars that took four carved their way through the field and were the ones that battled for the win.

Of course, it’s easy to say that all of these calls were wrong in hindsight. But if just one of the three had gone the other way, Truex might be in the playoffs this weekend with a win.

For now, the Small and Truex pairing has led to consistent speed for the No. 19 team; strategy is fixable while speed is harder to capture. But if strategy continues to be a weakness for the rest of the season, it may be time to consider a change.

With just three cars, who will go furthest in the Cup playoffs for Toyota?

The regular season finale was a nightmare for Toyota. The manufacturer entered Daytona International Speedway with four or five potential playoff drivers and wound up with three at the end of the weekend. Kurt Busch remains sidelined with a concussion, Bubba Wallace was unable to win at Daytona, and Austin Dillon’s win knocked Truex out. For the 2022 playoffs, Toyota will be in unfamiliar territory with just Kyle Busch, Denny Hamlin and Christopher Bell.

What’s also unfamiliar for Toyota is the season that they’ve had. In 2021, JGR won nine races and put two cars in the Championship 4. Through 26 races of the 2022 season, JGR has only won four races while no one looks like a serious championship contender. Busch is entering the playoffs on a cold streak with just two top 10s in the last 11 races. Hamlin has two wins and 384 laps led under his belt, but he has just seven top 10s and enters the playoffs with an average finish of 19.0.

Bell has looked like JGR’s best driver for much of the season, and he leads all Toyota drivers in top fives and top 10s. But with just 262 laps led, he has not shown the speed needed to be a serious title threat, either.

The good news for Hamlin is that the first round consists of Darlington Raceway, Kansas Speedway and Bristol Motor Speedway, three tracks that he has excelled at throughout his career. Likewise, Busch showed top-five speed at Darlington and Kansas earlier in the year, and he is the active wins leader at Bristol with eight. Bell is likely to move on through the first round as well, which makes the Round of 12 the big wildcard with Talladega Superspeedway in the middle and the Charlotte Motor Speedway ROVAL at the end.

If JGR can find its rhythm in the playoffs, all three cars have the potential to make the Round of 8 at minimum. But if the team continues to falter, the second round looks to be its ceiling.

Has AJ Allmendinger locked up the NASCAR Xfinity Series regular season championship for the second year in a row?

He has a far more comfortable margin in 2022. Through 23 races, Allmendinger has scored three wins (all on road courses), 11 top fives, 20 top 10s and boasts an average finish of 6.6. With no one else having an average finish better than 10.0, Allmendinger has a 58-point lead over Ty Gibbs and an 80-point advantage over Justin Allgaier with three races remaining before the playoffs.

With that said, just one DNF from Allmendinger would be enough to bring the other two back into the conversation. Allgaier was only 19 points behind Allmendinger at the start of the race at Watkins Glen International two weeks ago, but he lost 51 points to Allmendinger after crashing out on lap 4; Allmendinger went on to finish second. With that one race, Allgaier’s gap in the standings went from 19 points to 70.

If Allmendinger has an early exit while Gibbs and Allgaier are there to capitalize on points, they have a fighting chance at claiming the regular season title. But if Allmendinger is able to keep the car clean for the last three races, he looks poised to enter the playoffs as the No. 1 seed for the second year in a row.

See also
Only Yesterday: 5 Times When NASCAR Playoff Drivers Got (a Little) Lucky

Are there too many superspeedways on the schedule?

If there was one word to describe last weekend at Daytona, it would be chaotic. Daytona and Talladega Superspeedway may be exciting for the fans, but the four annual races present the greatest risk to drivers and have collectively left the teams with millions in damage. And with Atlanta Motor Speedway’s 2022 repave to produce pack racing, the number of superspeedway races per year has effectively jumped from four to six.

While the tracks have provided great racing in the opening and middle stages, the races have predominantly turned into crashfests in some shape or form by the end. Repairing and replacing cars hurts the bottom line for teams, and with concerns about the Next Gen car failing to properly absorb energy for certain crashes, the risk of running 36-plus cars in a giant pack is far greater than it was just a year ago.

At the very least, other 1.5-mile tracks should not be repaved and turned into clones of Atlanta. One-sixth of the Cup schedule now consists of superspeedways, a number that is more than enough. And with the survival required to win and the hefty repair bills that teams are left with, truncating the number of superspeedways back down to four would have its benefits. In addition, it would reduce the number of tracks with two dates and in turn would allow for new tracks and new markets to have a chance on the Cup schedule.

Superspeedway races are among the most-watched events on the schedule and removing them has the potential to alienate fans. But if the races continue to end in calamity, it may be necessary down the road.

That said, the most important focus is making sure the drivers are comfortable racing in the Next Gen car for 2023; any changes to the car, for safety reasons or otherwise, most likely will not be ready by the end of the 2022 season. If the drivers continue to suffer harder hits with the car next season, racing at superspeedways should be approached with an abundance of caution.