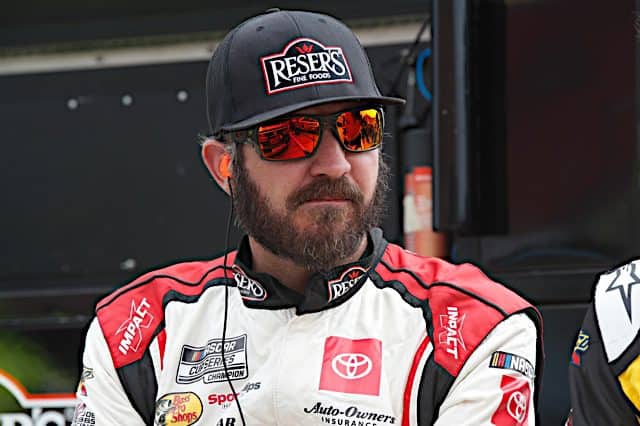 DAYTONA BEACH, Fla. – Martin Truex Jr climbed out of his damaged car and looked on as Austin Dillon celebrated on the finish line mere feet away from him.

Truex could do nothing but stare blankly into the distance. For the 2017 NASCAR Cup Series champion, Sunday afternoon (Aug. 28) at Daytona International Speedway was nothing to celebrate.

The 42-year-old veteran found himself knocked out of the playoffs at race’s end despite finishing the regular season fourth in points. Truex, sitting above the playoff cut line before the 400-mile event, was bumped outside of the top 16 in points after Dillon won his first race of 2022 on Daytona’s 2.5-mile circuit.

He missed his chance at another title by only three points.

“It’s just frustrating …” Truex said on pit road post-race. “At the end of the day, we still had a decent finish, but it doesn’t matter. It sucks. No way of sugar coating it. You race your ass off all year, and you work hard, and you try to do all the things it takes, and you come up three points short. It’s a pretty tough pill to swallow when I know we could do something in the playoffs.”

Despite the way it ended, Truex actually started the day strong. In fact, he had overtaken rival Ryan Blaney in the standings early on in the race, a move which would have guaranteed him a postseason spot.

Blaney was involved in a multi-car accident in stage one on lap 32. The injured No. 12 Team Penske Ford was no longer able to keep up with the lead draft, falling several laps down after suffering heavy damage and coming within 30 seconds of getting parked through NASCAR’s damaged vehicle policy.

It was great news for Truex, as the New Jersey native now only had to run near the front for the rest of the race and score enough stage points to catch and overtake Blaney in the standings. Even better, the Joe Gibbs Racing driver was still safe as long as there wasn’t a new winner to qualify for the playoffs.

Truex did his job well, too. He finished fifth in stage one and second in stage two, earning himself 15 points while Blaney had zero. By the beginning of the final stage, it seemed the No. 19 was poised to secure its spot in the postseason regardless of what happened out front. As the approaching rain colored the sky darker, Truex’s playoff future got brighter.

The No. 34 gets turned, and we've got trouble! @MartinTruex_Jr is among those involved! pic.twitter.com/v7ITJhckaU

The damaged fender on the No. 19 acted as a parachute on the Toyota for the rest of the race.

A great day goes bad in a hurry for @MartinTruex_Jr. pic.twitter.com/dsW1xp7Vj7

“We really did a good job, I think,” Truex said. “We ran a smart race. Just wrong place, wrong time.”

From that point on, the bad news was his JGR vehicle was crippled. However, the good news was, so were many others.

Even after the incident, Truex was still in the race, which was more than a lot of other drivers could say as two more multi-car crashes occurred shortly after. What’s more, he was actually still somewhat competitive, working his way back into 11th by lap 138.

That’s when another setback came.

Here's a look at the incident on Lap 138 at @DAYTONA. pic.twitter.com/6CySgUxG2r

The rain snuck by NASCAR race control and onto turn 1, throwing the field of cars going over 190 mph into its mercy.

Most of the field was collected in the melee and few cars still remained. One of them was Truex.

See also
Thinkin' Out Loud at Daytona: Rain Wrecks in the Playoff Cut Race Are Unacceptable

Despite the chaos and high attrition rate, Truex remained among the lucky few that survived. Even more fortunate, he remained ahead of Blaney in the standings, and with the rain increasingly soaking the track, the field was red flagged. It looked more and more as though the race was going to be ended early and Truex would escape from the jaws of playoff disaster. Dillon was seemingly about to be crowned the winner and Blaney, not Truex, would be knocked out of the top 16.

However, after hours of delay, the rain lightened up and Truex’s luck started to change for the worse. With NASCAR wanting to finish the race under green, the No. 19 team had to venture into the unknown one more time. Even worse, they had to do it with a very damaged racecar.

But there was hope. The No. 3, which restarted as the leader, was the only car still on the lead lap left that could win its way into the playoffs. As long as Dillon stayed out of victory lane, Truex was safe regardless of where he finished. As the field paced around the newly dried track, crew chief James Small coached his driver on where he needed to finish in case Dillon won.

When the race restarted with 17 laps to go, Truex resumed in fourth and pushed Austin Cindric into the lead before he eventually fell off the lead draft.

Thankfully, the No. 19 still had the point advantage over Blaney, but it was only by the slimmest of margins — one. If Truex could keep his position for the remaining 15 laps, he would qualify for the playoffs.

It was then that missing fender began to take its toll on the Toyota.

“I just had too much damage at the end,” Truex said. “The only chance I had with them is when they were side-by-side and started checking up at the line and I could get to them.

“I had no right-front fender. I had no idea what was going on. Our car was so damaged.”

Truex was powerless as he was freight-trained by a line of four Fords working together with five laps to go. He lost four points in the process and fell below Blaney in the standings for good.

After falling back to the edge of the top 10, Truex’s nightmare scenario came to pass as Dillon made the winning move on Cindric’s Ford with three laps to go.

AUSTIN DILLON TO THE LEAD!

THREE TO GO AT @DAYTONA! pic.twitter.com/jpFyzDaA3s

The Richard Childress Racing duo of Dillon and Tyler Reddick worked together to hold off the rest of the field and secured the win for the No. 3, sealing Truex’s fate.

“I knew where I had to finish if a new winner was going to win,” Truex said. “I just didn’t have enough speed to stay in that position. It’s as simple as that.”

It’s the first time Truex failed to make the Cup playoffs since 2014. Now, with 10 races left and no championship to go after, there’s really only one thing left to do with his three other JGR teammates competing for the title.

“We’re always there for (JGR teammates),” Truex said. “We’re always a good team player. We’ll probably do some testing and try to go figure things out better for next year as well.

“We’ve still got a lot to race for. To go win a couple races would be awesome.”

Absolutely heart breaking! I don’t know how I can sleep now! Reverend Joe is wondering why some of that money didn’t pay off.

It’s the little things in life that make you smile!!!