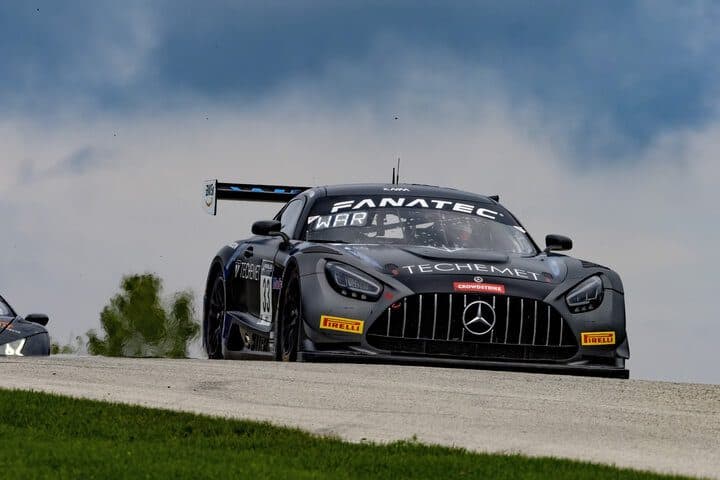 Winward Racing’s Philip Ellis and Russell Ward led nearly flag-to-flag at Road America Saturday (Aug. 20) to win Race No. 1 for Fanatec GT World Challenge America Powered by AWS on the 4.025-mile circuit.  It is the duo’s first win of the year after coming so close at Watkins Glen.

“I tried to conserve my tires [during my stint] just in case the Lamborghinis came up to me,” Ellis told SRO America’s Shea Adam after the race.  “Thankfully, they couldn’t hold up the pace for too long.  So proud that we got the overall win as well.”

Ward started from the pole and got a nice jump on US RaceTronics’ Steven Aghakhani.  Ward was set to pull away, but chaos broke out just a couple of corners into the race.

Aghakhani spun out his Mercedes exiting turn 3 and collected Crowdstrike Racing with Riley Motorsports’ George Kurtz, Turner Motorsport’s Michael Dinan and RealTime Racing’s Erin Vogel.  This brought out the race’s first full course caution.  Aghakhani, Dinan and Kurtz were all out on the sport.  Vogel was able to drive her Acura back to the pits to make repairs.  She was ultimately able to continue.

The wreck put K-PAX Racing’s Michele Beretta up to second with teammate Misha Goikhberg right behind.  The teammates then fought among themselves.  This allowed Ward to pull away from the Lamborghinis and for BimmerWorld Racing’s Chandler Hull to catch them.

Another safety car period came out 28 minutes into the race when Jeff Burton, making his debut for TR3 Racing, spun his Lamborghini exiting turn 5 and backed into the wall.  While Burton was able to drive away from the scene, his rear suspension was bent significantly, ending his day.

Burton’s wreck dropped the field to only 12 cars.  The remaining teams had to deal with impending weather and relatively high tire wear.  This led to nearly everyone making their mandatory pit stop at the earliest possible time, with the exception of GMG Racing’s Kyle Washington.

Once the stops were complete, Ellis ended up with a 3.7-second lead over K-PAX Racing’s Andrea Caldarelli.  Despite that, the threat of rain was still in play.  Forecasts stated that it would come in with roughly 25 minutes.  Ultimately, it never arrived with the vengeance necessary to require rain tires.

Ellis and Ward’s margin of victory was 10.753 seconds over Goikhberg and Jordan Pepper.  Caladrelli and Beretta were third.

In Pro-Am, Hull qualified fourth overall and just barely avoided the spinning Aghakhani exiting turn 3 to keep the advantage.  Behind Hull, Wright Motorsports’ Charlie Luck was running second and had Racers Edge Motorsports’ Ashton Harrison right on his tail.  The two battled for a couple of laps before Harrison was able to make the pass stick.

From there, Farnbacher was able to pull away to give himself and Harrison their second Pro-Am victory of the year in fourth overall.

Farnbacher and Harrison’s margin of victory was 4.733 seconds over Hull and Auberlen.  Luck and Jan Heylen were, followed by the DXDT Racing Mercedes.  Scott Smithson and Bryan Sellers were fourth, while David Askew and Dirk Mueller were fifth.

In the Am class, Triarsi Competizione’s Charlie Scardina qualified sixth overall and moved up to fifth by avoiding the opening lap crash.  He was just a tad off of the leader’s pace, which gave him a big lead over Washington.  Once Onofrio Triarsi got in the car, the Ferrari dropped back a little.  What really cost the Triarsi Ferrari time was that they were unable to get the car full of fuel during their pit stop.  That forced Triarsi to make an unscheduled stop for fuel with 12 minutes remaining.  Despite this, Triarsi and Scardina held on to win the Am class.  Due to the positioning of the overall leaders, they ended up a lap ahead of Washington and James Sofronas.

Race No. 2 for Fanatec GT World Challenge America Powered by AWS is scheduled to go green at 2:15 p.m. ET Sunday afternoon.  The race will be streamed live on the GT World YouTube channel.  Tape-delayed coverage will air on CBS Sports Network at 8 p.m. ET.