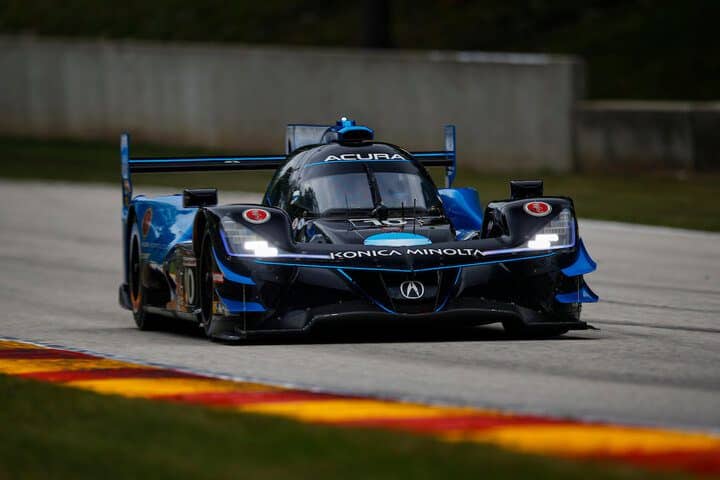 Wayne Taylor Racing’s Filipe Albuquerque won the pole Saturday (Aug. 6) for Sunday’s IMSA WeatherTech SportsCar Championship IMSA Fastlane SportsCar Weekend event at Road America with a lap at 133.800 mph. It is the team’s third pole of the season, but the first for Albuquerque. Previously, Albuquerque and Ricky Taylor won the Motul Pole Award 100 during the ROAR Before the 24 to win the pole for the Rolex 24 at Daytona. Taylor won the pole at WeatherTech Raceway Laguna Seca.

“When I went through turn 1, the car hooked up and I thought, ‘oh my god, this is awesome!,” Albuquerque told NBC Sports’ Matt Yocum. “It just felt amazing. The Carousel was nearly flat. It was just perfect. Hats off to the entire crew, Acura and Konica Minolta.”

There was a split-schedule in play in the DPi class. Three of the teams went out immediately, led by JDC-Miller MotorSports’ Richard Westbrook. Albuquerque was the first driver to set a truly representative time to put himself on top.  =From there, he continued to improve his times.

The second group came out halfway through the session, led by the Chip Ganassi Racing Cadillacs of Sebastien Bourdais and Alex Lynn. Lynn, who was fastest overall on Friday, had the pace to challenge Albuquerque. However, he didn’t get a chance to show it.

The session came to an early end when Bourdais went too wide entering turn 14. He dropped a wheel and slid through a gravel trap before hitting the tire wall head-on to bring out the red flag. By that point, more than 12 minutes of the session had been completed, making the session official.

Albuquerque ended up .182 seconds ahead of Lynn when the session was red-flagged. Meyer Shank Racing with Curb-Agajanian’s Tom Blomqvist will start third, followed by Westbrook. Action Express Racing’s Olivier Pla was fifth.

Bourdais walked away from the crash, but there was a decent amount of damage on his Cadillac DPi-V.R. In addition, since he brought out the red flag, Bourdais lost his best two laps and will start at the back of the DPi class.

PR1 Mathiasen Motorsports’ Patrick Kelly put himself at the top of the charts in LMP2 with his first lap at speed. For the remainder of the session, Kelly went back and forth with his teammate Steven Thomas.

Ultimately, Thomas put down a lap at 127.678 mph that held up to win the class pole. With Bourdais’s penalty, the lap was good enough for sixth overall. Thomas was .134 seconds faster than Kelly. Era Motorsport’s Dwight Merriman will start third, followed by High Class Racing’s Dennis Andersen and Tower Motorsport’s John Farano.

In LMP3, Sean Creech Motorsports’ Malthe Jakobsen earned his first career pole position and the first for SCM in the IMSA WeatherTech SportsCar Championship with a track-record lap at 122.016 mph. It was the only lap in LMP3 all weekend completed in under two minutes.

In GTD Pro, Corvette Racing’s Antonio Garcia set the pace early on, setting the first GT lap in the 125-second bracket for the weekend. The Corvette has spent a lot of time on-track at Road America this year for testing purposes, but they just didn’t have the pace on this day.

Pfaff Motorsports’ Matt Campbell took the provisional pole away with a lap two-tenths of a second faster. VasserSullivan’s Jack Hawksworth then immediately usurped Campbell with a lap at 116.243 mph.

Campbell was faster on his next lap by nearly three-tenths of a second over Hawksworth, but proceeded to go wide exiting turn 14 and spun out. Campbell didn’t hit anything, but the spin clinched the class pole for Hawksworth and Lexus.

Hawksworth’s lap was just over a quarter of a second faster than Campbell. Garcia will start third, then BMW M Team RLL’s John Edwards. The Heart of Racing’s Alex Riberas was fifth, but had an off-course excursion exiting the Kink that more or less ended his session early.

In GTD, VasserSullivan’s Frankie Montecalvo was fast early in the session, but Turner Motorsport’s Robby Foley ended up winning the class pole with a lap at 115.580 mph. The lap, which was fourth of all GT drivers, was .140 seconds quicker than Montecalvo. CarBahn Motorsports with Peregrine Racing’s Robert Megennis, who had the fastest GT lap of all in the first practice session Friday, will start third. Team Korthoff Motorsports’ Stevan McAleer was fourth, while Winward Racing’s Russell Ward was fifth.

Due to the schedule, there will be no morning warmup session Sunday. The 160-minute IMSA Fastlane SportsCar Weekend race is scheduled to go green at 11:40 a.m. ET (10:40 a.m. CT). The race will be streamed live on Peacock starting at 11:35 a.m. USA will pick up the race in progress starting at Noon.