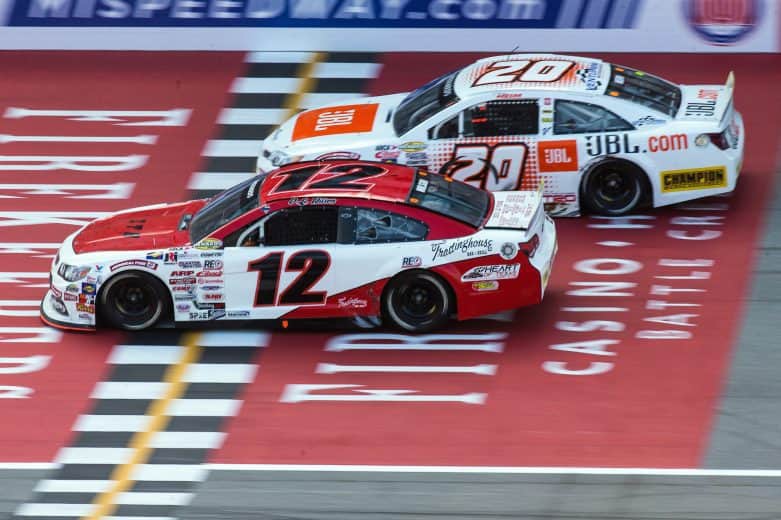 With zero ARCA Menards Series victors at Michigan International Speedway (MIS) entered for the ARCA race there on Saturday (Aug. 6), the manufacturer trends suggest either a Chevrolet or Ford driver will win the Henry Ford Health 200.

Toyota drivers won the ARCA races there in 2013-14 and 2016-21, with Chevrolet drivers sandwiched in between, victorious from 2015-17. In addition, the top seven ARCA teams in this year’s owners’ points standings are either Chevrolet or Toyota teams.

Three Chevrolet drivers are atop the ARCA championship standings, with Rajah Caruth holding a precarious one-point lead over his Rev Racing teammate Nick Sanchez and five over Daniel Dye.

Caruth will make his first start at the 2-mile paved oval. Caruth enters with five straight top-10 finishes with two top fives among those. He’s excited to race at MIS and he’s salivating at the chance to score his first career ARCA win there.

Sanchez competed at MIS last year, finishing third behind Ty Gibbs and Corey Heim. Sanchez is confident he will have a fast No. 2 Chevrolet.

“I think we have a very good Chevrolet for Michigan,” Sanchez told Frontstretch. “It’s the car that we raced at Pocono Raceway, which is the car we raced at Kansas Speedway [where Sanchez won], and we raced it at Michigan last year. Extremely fast car and I have the utmost confidence in my team. I believe this year will not be any different [in terms of contending for the win].

“Michigan is unique because it’s a mix between a 1.5-mile and a superspeedway,” Sanchez added in a team preview. “The straights are very long and the high downforce lower horsepower setup of the ARCA cars makes the draft very effective. I think our team brings way more speed to a fast momentum track. We know that tracks like Michigan are tracks that we can capitalize on. Dirty air is another trait of Michigan; restarts will be extremely important to get out front and clean air.”

Dye too has not competed at Michigan before. Dye’s crew chief Chad Bryant is quite knowledgeable about MIS. He has been atop the pit box for three ARCA races at MIS, with his drivers earning one pole, leading 64 laps and scoring three top-five finishes. Dye himself has a five-race top 10 streak with three top fives. Dye also is welcoming a new sponsor onboard his No. 43 Chevrolet.

Saturday, Daniel will go to battle at Michigan International Speedway in this beautiful No. 43 @TeamChevy, with @Helm1943 onboard for the very first time! 🤩 [PR] pic.twitter.com/LVdrj4o6vK

2020 ARCA champion Bret Holmes is back and because his team is not full-time, Holmes is chasing trophies, specifically his second ARCA one.

“I only had two or three racetracks that I was interested in running in the ARCA series that I want to win at, and Michigan and Talladega Superspeedway were the two big ones for sure because back in 2020 I felt like I had a couple of those races won. Now I want to get back to those tracks and get some redemption. Hopefully, we will come out with a win. We have the potential, equipment and speed there, so we are close.

“Track time is valuable. It’s not like your normal speedway or your normal 1.5-mile track. Just the way you approach the corner and how much you are on the gas; how much more aero dependent the track is compared to others makes it difficult and a big eye-opener for someone who has not been there before to know what it feels like.”

Holmes also emphasized clean air is huge at MIS. Drafting on the straightaways is important too, he noted, which cost him the victory there in 2020.

Last year in the ARCA race at MIS, Gibbs drove the No. 18 Toyota to the victory lane. Gibbs’s successor Sammy Smith hopes to finally give the No. 18 team back-to-back victories at a racetrack, something he has yet to accomplish.

Moreover, Smith is running double-duty at MIS on Saturday, so he will gain valuable experience in the Xfinity Series event.

Smith won the other ARCA race in Michigan this year at Berlin Raceway. The last driver to sweep the ARCA events in the Mitten State was Chris Buescher in 2012. Can Smith replicate that feat?

Venturini Motorsports has two ARCA winners in its MIS driver lineup. Gus Dean is back in the No. 15, the entry which won the most recent ARCA race this season at Lucas Oil Indianapolis Raceway Park. In his two ARCA starts at MIS, Dean has two top-five finishes. Dean also has three top fives and three top 10s in his three ARCA starts this season, too.

In the ARCA event at MIS last year, Heim started second and led one lap en route to finishing second. The 20-year-old hopes to add his second ARCA win this season to give him nine career trophies.

To win the ARCA race at MIS, one must qualify inside the top five. It has been 10 years since an ARCA winner at MIS qualified outside the top five. Moreover, the last five winners have all started on the front row. Yes, ARCA qualifying there really matters.

All ARCA on-track activities will take place on Saturday. There will be a 35-minute practice session followed by a 20-minute group qualifying session. Then, the 100-lap race will take place at 6:30 p.m. ET with TV coverage provided by MAVTV Motorsports Network and available on Flo Racing.