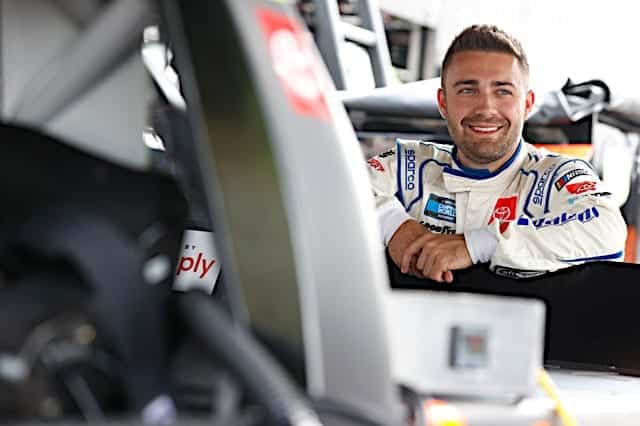 In the Truck Series’ first race at IRP since 2011, he more than tripled his career total.

Majeski led a career-high 71 laps and was the dominant car in the final third of the race before he lost the lead to Grant Enfinger on lap 189.

After a largely quiet first half of the race, Majeski and the No. 66 team came to life toward the end of stage two. The No. 66 team elected to take two tires under a lap 106 caution, and Majeski found himself restarting inside the top five. He then passed Chandler Smith for the lead on lap 117, and he cruised to the stage two win three laps later.

Majeski retained the lead during the stage two caution, but he now had to deal with Enfinger, John Hunter Nemechek and other drivers who had taken four tires. But despite the tire disadvantage, Majeski successfully held off all challenges for the lead and began stretching his way out to a 1.5-second lead over Enfinger on long green-flag runs.

“Just fired off struggling, Joe [Shear Jr., crew chief] made a great change on that first stop, gave up some track position on the pit stop to do it, and the thing just came alive,” Majeski said post-race. “Really good truck, good second pit stop, won that stage and really just riding; had a really, really good truck.”

Coming into the race, Majeski’s best Truck finish was a runner-up finish behind a dominant Zane Smith at Kansas Speedway in May. Holding a commanding lead, Majeski looked destined to score win No. 1 with just under 20 laps remaining.

However, the win began to slip away in the closing laps, as Majeski was passed by Enfinger for the lead on lap 189. During that time, Majeski said he had developed a leaking tire, which would have taken him out of contention.

“We must’ve run something over,” Majeski said. “We had a right rear going down on that long run where Grant got by me.”

A caution came out after Colby Howard crashed after contact with Carson Hocevar on lap 191, and Majeski’s hand was forced to pit for tires under the caution. He dropped from second to 11th on the restart with two laps to go, and after an overtime period extended the race to 207 laps, Majeski was only able to claw his way up to eighth by the time the checkered flag flew.

“Overall, a really good Road Ranger Toyota Tundra TRD Pro,” Majeski said. “Had a chance to win leading with 10 to go, that’s really all you can ask for. Obviously the yellow probably saved us because we had a flat tire, but it mixes up the strategy and it just didn’t go our way.”

The Truck Series will return to Richmond Raceway for Aug. 13 for the second playoff race of the season. Even though the night didn’t end with his first career Truck win, Majeski’s strong performance at IRP gives him all the momentum in the world heading into the upcoming weeks of the season.

“I hope [this performance translates] really well,” Majeski said. “We got Richmond in two weeks, so really excited to go there. We have a really good short track package that showed up tonight. Just hope we can put it all together.”