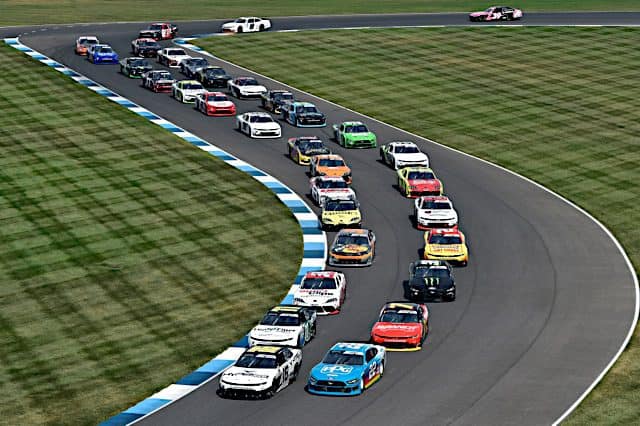 The NASCAR Cup and NTT IndyCar series are racing back-to-back at the Indianapolis Motor Speedway road course once again after their 2021 doubleheader, but it’s not the first time a NASCAR division has orchestrated a double feature with the open-wheel field.

IndyCar had same-afternoon doubleheaders with the NASCAR Xfinity Series in both 2020 and 2021, the latter doubling as a weekend feature with the Cup Series.

That said, the open-wheelers have been racing on IMS’ infield layout since 2014; NASCAR didn’t switch to the circuit until after the turn of the decade.

Some of the inexperience aside, let’s take a look at last year’s doubleheader and how it unfolded for both series, and preview how things could unfold for 2022.

If someone had to pick a winner for IndyCar’s event at the layout, it’d probably be Will Power. He’s won five of the 12 total Indy Grand Prix events, including last year’s late-summer running as part of that doubleheader weekend. Former Team Penske stablemate Simon Pagenaud has three wins of his own there, but hasn’t visited that victory lane since 2019 and is now in different equipment with Meyer Shank Racing, while Power is still with Penske.

Power’s dominance is staggering: another podium in the most recent race at Indy’s road course means half his finishes are podiums, while all but three are inside the top 10. His average finish sits at 6.58 and he’s led an incredible 341 laps, including a wire-to-wire victory in 2020 that featured the No. 12 out front for all 75 circuits.

Since the beginning of 2020, six races have been run on the Grand Prix course, and 10 different drivers factor into the 18 total podium finishers. There’s very little consistency among who ends up on the trio of steps once the checkered flag flies, at least recently, outside of a couple of names

Colton Herta has stood on each step: after fourth-place efforts in each of the first two 2020 events, he finished second in the third. He followed that with a third-place in 2021’s second visit and won 2022’s first, leading 50 laps (and making a spectacular save) en route to the victory.

A driver looking for his first career victory in the series is Romain Grosjean. After 179 starts in Formula 1 in a career that nearly came to a horrific end at the Bahrain Grand Prix, Grosjean joined Dale Coyne Racing with Rick Ware Racing and made some impressive runs in his first IndyCar campaign.

He’s now finished second three times while racing in the series and led 44 laps in the first 2021 race after sitting on the pole. Grosjean’s searching for his first win and sits midpack in the standings in 14th; watch for the Andretti Autosport driver to contend this weekend.

Also with Andretti is Alexander Rossi, who has 10 starts at the Grand Prix course and is now at a 37-month win drought. Almost exactly three years and a month since his most recent win, Rossi heads to a track where seven of his 10 efforts have concluded in top-10 finishes, including back-to-back podiums in 2020.

It also feels like it’s approaching dire straits for Rossi, even though he’s joining Arrow McLaren SP next year. His best season was in 2018, featuring three wins and eight podiums. The next year was a slight dip, though still solid, but since the start of 2020 Rossi has zero wins, just one pole and eight total podiums: as many such finishes across three years as he had in a single season.

It’s probably a good thing the Xfinity Series isn’t returning to Lucas Oil Indianapolis Raceway Park, because this bizarre incident involving Steve Wallace, Michael Annett and Tim Andrews happened at their most recent visit to the track in 2011. It’s stuck with me ever since.

Instead, it makes its third visit to the Grand Prix layout, where neither 2020 nor 2021’s winner will be in the same car or in the race at all — 2020 victor Chase Briscoe jumps in SS Green Light Racing’s No. 07, while ’21’s trophy holder Austin Cindric won’t appear in Xfinity competition for the race at all.

That said, four of the top-five finishers in 2020 also finished top five in 2021, and two of the repeaters are in the field. AJ Allmendinger improved from fourth to second between the two races, while Noah Gragson finished third and fifth, respectively. Gragson already has three wins in 2022 and looks to go back-to-back after winning at Pocono Raceway, while Allmendinger kicked off the season with 12 straight top-10 finishes but has just one win to his name so far.

See also
NASCAR Mailbox: Why Is Nobody Talking About AJ Allmendinger?

For the Cup Series, we have exactly one race to base analysis off of.

2021 race winner Allmendinger is back in Kaulig Racing’s No. 16, while Briscoe was no slouch himself: he was running up front before contact with Denny Hamlin sent him into the grass … and further, retaliatory contact between the two parted the Red Sea for Allmendinger to win.

Ryan Blaney, still in need of a win in 2022, finished runner-up last year. Chris Buescher and Michael McDowell, both in contention at multiple road races so far this season, finished 12th and 30th in 2021, respectively, though McDowell did score stage points before crashing out.

One name not to count out: Justin Haley. The Kaulig driver finished second and third, respectively, in the two NXS races at the layout to date. Last year, he put on a sneakily solid performance: stage points in both the first and second segments and an eighth-place finish when the checkered flag flew for him and the No. 77 Spire Motorsports team.

After a third-place effort at Darlington Raceway, Haley finished outside the top 20 in four of the next six races before a top 10 at Atlanta Motor Speedway. A 20th at New Hampshire Motor Speedway and 21st at Pocono followed, so the No. 31 Kaulig Cup team is looking to rebound.

IndyCar kicks things off with the Gallagher Grand Prix on Saturday (July 30) at noon ET, followed by the Xfinity event at 3:30 p.m. Saturday. The Cup Series follows on Sunday at 2:30 p.m.