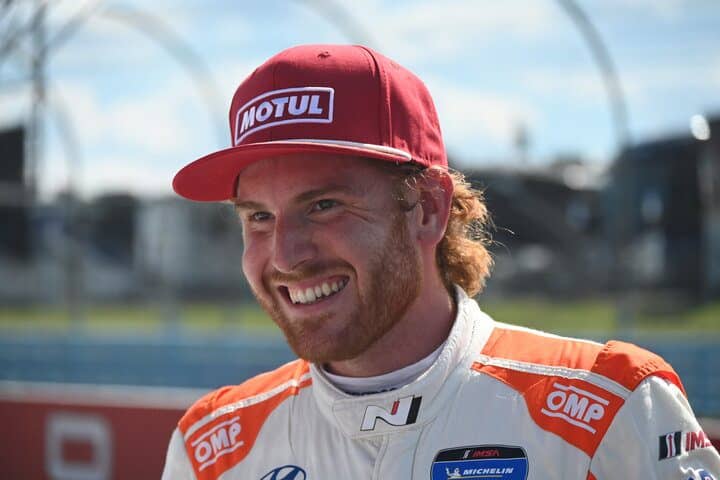 Mason Filippi is a driver whose experience is primarily in sports car racing. He is a past champion in SRO America’s now-defunct TCR class that raced as part of TC America. More recently, he has competed full-time in IMSA Michelin Pilot Challenge, first for Copeland Motorsports, then for Bryan Herta Autosport in a Hyundai.

These days, Filippi is trying to break into NASCAR. Frontstretch sat down with Filippi at Lime Rock Park to talk about his season at Bryan Herta Autosport, his attempt to transition to NASCAR and more.

Phil Allaway, Frontstretch: It’s been an interesting year for you here in IMSA Michelin Pilot Challenge. If the Elantra shows up, it’s been on the pole. It’s been on the pole four times, you have two and Tyler Maxson has two. Unfortunately, the finishes haven’t shown this pace.

As a result, you’re currently 13th in points. The big issue this year has been the big wreck at Sebring that forced you to a Veloster for two races.

How much did that set the team back?

Mason Filippi, No. 77 Hyundai Elantra N TCR: It was really tough for the team. Especially coming out of the [COVID-19] pandemic, it’s really tough to get parts for everybody. It’s been tough, so having the Veloster [was critical].

We had to rebuild the one that we did get. Bryan Herta Autosport put together a great car, but we ran into a lot of gremlins. It’s one of those things that happens.

Allaway: Outside of the big wreck, what else has been troubling your team in the races?

Filippi: We’ve just run into some issues, nothing crazy, but just a few things. Tyler and I have been really fast, but unfortunately, some things have happened with our car where we’ve been unable to finish the race. Even though we show a lot of speed, we haven’t been able to put everything together.

I think when you come from, for example, the TC race, which is a sprint race as opposed to an endurance race, there’s a lot of attrition from the track being so tight. The walls are so close, so for the first half, first three-quarters of the race is all about keeping your car good for your teammate.

It’s a fun, fun place, though. It’s a hairy track, and you put it on the line here.

Both of us have bonded over some of the troubles that we’ve had this year. It’s cool to be able to push each other to that next level with our speed.

Prior to the Lime Rock Park 120, we had the chance to flip this question around and ask Maxson about Filippi. He was equally complimentary.

“It’s great. Me and Mason have developed a pretty great relationship over the last three years, and being able to drive with him has been awesome,” Maxson told Frontstretch. “We’ve shown that we have the speed together. It’s just about putting it all together and finally getting that black cloud off of our heads and get some good luck on our side.

Allaway: Since this is your fourth year racing Hyundais, how has the Hyundai TCR effort developed over that time?

Filippi: It started off really small with just one engineer, John. I was just talking with him last night; he engineers the No. 33 [for Robert Wickens and Mark Wilkins]. He was there for the first year, and I’ve been with him ever since.

It’s been amazing to see what Bryan [Herta] and Sean and Hyundai have been doing to put together this amazing program and all the people here that work so hard and so well together.

I think something that BHA has done really well is [to] have a really unique team environment with a really good crew and really good engineers and drivers. So even though you have a lot of inter-team competition, you can go and eat dinner together. I really enjoy that part.

Allaway: Back in Watkins Glen International, you mentioned that there are specific balance differences between the Veloster and the Elantra, mainly due to the fact that the Elantra is bigger. How did you have to adjust your style in order to compensate?

Filippi: For me, I like the shorter wheelbase car since it fits my driving style. This year, it’s primarily been just learning and working with our engineer Kyle to maybe [… a]djust my brake bias in the car or do different things with the setup so that I can hustle the entry [to the corner] a little more.

With the longer wheelbase, [the car] is not as quick to react. So, it’s about being a little bit calmer [in the car]. But the Elantra has been developed really well this year and has been truly fast. It’s been good.

Allaway: Speaking of brake bias, do you have a readout on your dash, or is it solely with a dial?

Filippi: We actually have a readout on our dash for that. We can’t really do it while we’re driving, but we can look at it before [going on-track]. We usually set it in the pits. We have a general idea of how many turns changes what, so it’s pretty nice versus the NASCAR stuff where you kind of guess, then hit the brakes and find out.

Allaway: Speaking of NASCAR, you made your NASCAR Xfinity Series debut last month at Portland International Raceway with DGM Racing. You finished 25th. How would you describe that weekend?

Filippi: I thought it was good. The team put together a good car. I had a few really unlucky circumstances during the race that put me back.

We ended up going a lap down just because we had to fix something on our car during one of the stages. You’re not really able to battle to get your lap back.

One thing that is different to IMSA is that they unlap all of the cars. In [the Xfinity Series], only one car gets unlapped.

I ended up being a couple of laps down, so I wasn’t able to get [my laps] back because I wasn’t on that next lap. I basically had to race it out through the attrition.

It’s cool to be able to learn the car and everything like that, but I wish that I could have gotten up there and been able to race a little harder.

Allaway: Do you think it would have benefitted you had the race been run in the dry?

Allaway: What was the atmosphere like at DGM Racing?

Filippi: It’s awesome. It’s like a really nice family atmosphere. They’ve put together a great effort. It was cool.

Allaway: You were supposed to make your Camping World Truck Series debut at Sonoma Raceway, but you were withdrawn from the truck before the race.

Filippi: I pulled out of the truck because it wasn’t prepared. So my manager pulled me out the morning of [the race] since they weren’t able to put together a competitive or decent truck.

Allaway: You ended up making your debut in Mid-Ohio. Practice and qualifying was sketchy to say the least. Can you take anything away from that?

Filippi: I met some really cool people in the paddock at some other teams. Maybe I can get some more opportunities with [them]. I think that it’s important to take everything that you did, learn, figure it out and move onto the next one.

Note: This is about all that Filippi was willing to say about his time with G2G Racing. He did not want to go on record about anything else in relation to his experience with the team.

Allaway: Do you have any more plans to race in NASCAR this year?

Filippi: I’m trying to. You might see me at the Brickyard [Indianapolis Motor Speedway road course] in the Xfinity Series, which would be a pretty awesome opportunity. It’s not announced yet, but I’m crossing my fingers that we’ll get it done.

Sure enough, Filippi did get it done. He will be back with DGM Racing in their No. 90 Chevrolet in the Pennzoil 150 at the Brickyard on Saturday, July 30.

Next week I’m racing the Pennzoil 150 at the Brickyard with @dgm_racing_ !!!🤘I have a campaign on OpenFender to give you the chance to be on the bricks of my DGM Camaro around the Indy Road Course. Can’t wait to get back in that Xfinity car💪 https://t.co/7I21m9ZHmD pic.twitter.com/EIBIWwo3iY

Since the No. 90 is not full-time, Filippi will have to qualify in the top 33 to make the race. With 42 teams entered, he will need to beat nine drivers in qualifying to make the field.

Allaway: There was something very noticeable that came into play during those races in Indianapolis last year that has come back into discussion recently: Sausage curbs.

What is the best way to go about those types of situations at a place like Indianapolis? Is there something that could be done so that the “turtles” do not need to be used to prevent corner cutting?

Filippi: Put some grass there, I guess. I don’t know.

As we saw, sausage curbs are probably not the best for that equipment. As a driver, it’s something that you want to avoid at all costs. I guess it’s down to the sanctioning bodies to figure that out. At places like here, [Canadian Tire Motorsport Park], [Michelin Raceway] Road Atlanta and Road America, you can’t really cut the course.

I think [Indianapolis] is an amazing track and will be a fun experience. Sausage curbs? I’m just going to treat them like they’re gravel. Just don’t go on it.

Allaway: For the remainder of this season, what kind of goals have you and Tyler set for yourselves?

The Lime Rock Park 120 ended up being a good race for Filippi and Maxson. Filippi qualified the car fourth in TCR and managed to keep it up in the hunt for the entire two-hour race. The duo finished a season-best third in TCR, 12th overall. It is their best finish of the year and moved them up to 11th in points.