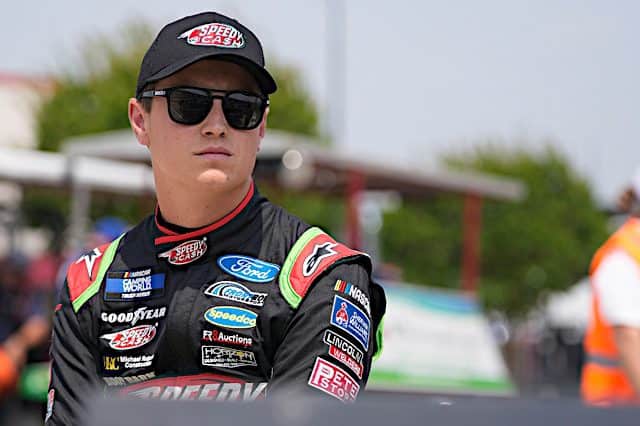 Heavy rain fell in Eastern Pennsylvania on Friday (July 22) afternoon, and with that, the practice and qualifying sessions for the NASCAR Camping World Truck Series race at Pocono Raceway were scrapped.

By virtue of his second-place finish at Mid-Ohio Sports Car Course and his status as the series points leader, Zane Smith had the highest qualifying metric score and will lead the field to the green flag at the Tricky Triangle tomorrow afternoon.

Smith has won three races in 2022, and he is currently on a streak of four straight top three finishes. He also looks poised to clinch the regular season championship at the conclusion of tomorrow’s race.

It’s an all-Smith front row, as Chandler Smith will join Zane on the outside of the front row for tomorrow. Starting third is Carson Hocevar, who now has his fifth top-three starting spot in as many races. Stewart Friesen will roll off fourth, while the ThorSport Racing teammates of Christian Eckes and Ty Majeski will make up the third row in fifth and sixth, respectively.

Derek Kraus will start tomorrow’s race from seventh, and he is the highest starting driver outside of the playoffs. Kraus and everyone else below the cut line will have one final shot at winning their way into the postseason tomorrow.

Grant Enfinger will start eighth, Kaz Grala has his best start of the season in ninth, and Kraus’ teammate Colby Howard will round out the top 10.

With qualifying rained out, Bryan Dauzat and Norm Benning failed to make the show.

The CRC Brakleen 150 will take place on Saturday, July 23 at 12 p.m. ET with TV coverage provided by FOX.