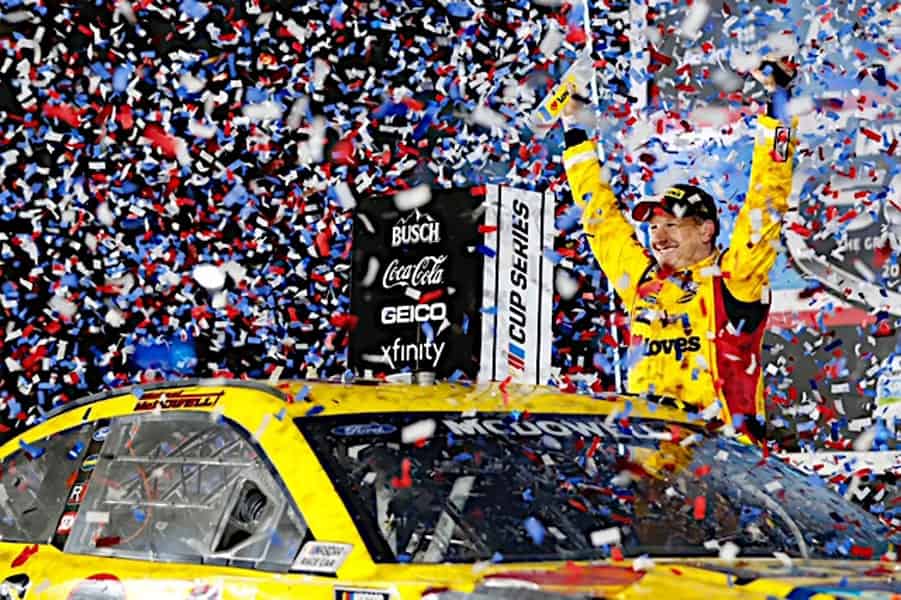 Yet after two consecutive titles, Reddick was the last of the three drivers who primarily contended for titles during that span to get a win. Cole Custer made a four-wide pass to score his first back in 2020 at Kentucky Speedway, while Christopher Bell chased down Joey Logano to win the Daytona International Speedway road course early in 2021.

Exactly two-and-a-half years into his Cup career, Reddick was still without a victory; it only took Custer about half a season and Bell about a year to get their first. Sunday (July 3) changed all of that, as Reddick — so close on multiple occasions in 2022 — finally got one, dominating the waning laps to score his first victory.

This current year has now become the season with the most first-time winners since 2011, when the same such category consisted of Trevor Bayne, Regan Smith, David Ragan, Paul Menard and Marcos Ambrose. A couple of parallels exist between the two seasons, too: the first such winner was in the Daytona 500 (Bayne, Austin Cindric) and another was a driver born outside the United States (Ambrose from Australia and Daniel Suarez from Mexico).

With Reddick’s consistency in 2022, it begged the question of how first-time winners have fared in the wake of their maiden victories. That’s a huge scope to take on, so I’m limiting the time span to the beginning of the current decade. Reddick became the 10th different driver to score their maiden victory in the 2020s. The second to do so in the decade was William Byron, who returns to the site of his first win of 2022 with Atlanta Motor Speedway this weekend.

In the COVID-impacted, bizarro year that was 2020, Custer and Byron were the only two drivers to visit victory lane for the first time.

Since Custer’s mid-season triumph at Kentucky, he had a relatively solid back half of 2020 (four top-10 finishes), but those seven such finishes that season dropped to just two in 2021 and zero through the first half of 2022.

See also
5 Points to Ponder: The Cup Series Drive for 17 is Alive

Byron, meanwhile, has fared much better. His 20 top 10s in 2021 were a career mark, including 11 straight starting with his win at Homestead-Miami Speedway, and 2022 has featured a career high in wins with two already through 18 races. He’s also struggled, particularly in recent months, but the two wins have been dominant victories.

It’s a tale of three seasons for 2021’s first-time winners. Michael McDowell has been a surprise, scoring career bests in a couple categories. Bell is consistent as ever, in the mix in a chunk of the races. Bubba Wallace has had horrendous luck, scoring just two top 10s, finishing outside the top 25 in almost half the races. Compared to McDowell and Bell, and to reference the recent release of Stranger Things 4, Wallace is essentially in the Upside Down.

Let’s start with the positives. McDowell, fresh off his win in the 2021 Daytona 500, had a banner year. That wasn’t just due to the milestone victory: he tied his career high in top fives and set a new personal best in top 10s with two and five, respectively. McDowell has already eclipsed the latter in 2022 with seven and has particularly exceled at superspeedways and road courses, finishing seventh at Daytona, fifth at Talladega Superspeedway, third at Sonoma Raceway and eighth at Road America.

Bell, as expected, has shown a ton of consistency. Sure, the equipment factors in; one would expect a lot of top 10s from a Joe Gibbs Racing car, but he’s actually doubled the amount of top fives and 10s he had at this point last season (two and five compared to four and 10). No wins have come for the No. 20 as of yet, but his excellent 2021 set him on a path for a solid 2022, in prime position to claim a points-based playoff spot even if he can’t win (if someone else wins, though, things might get a bit desperate for the Toyota camp).

Wallace and the aforementioned terrible, horrible, no good, very bad season have continued their tango to the halfway point. Just one top five and two top 10s mark his stats for 2022, and though he finished second at Daytona his return to Talladega after winning there last fall didn’t go quite as well. A whopping five DNFs mar his season so far, but there are plenty of chances to turn it around. He was running well at Atlanta in the spring before getting crashed as the field came to the checkered, and Daytona is a huge opportunity for a win as well. Don’t forget Michigan International Speedway, which is coming up for the Cup Series and is where Wallace won in a truck several years ago.

It’s the big one.

No, no, not the crash. The year in terms of first-time winners, the most since that 2011 campaign. Like 2011 and Bayne, 2022 kicked off with our first first-time winner doing so in the Daytona 500. Cindric, admittedly, has struggled since the out-of-nowhere victory, suffering several DNFs but recently getting on a hot streak of three straight top 10s: heading to Atlanta, an 11th at World Wide Technology Raceway at Gateway gave way to finishes of fifth, seventh and seventh to boost his top-10 result total to five in 2022.

A few weeks after Cindric’s first, his primary 2020 Xfinity championship competitor in Chase Briscoe won his first Cup race at Phoenix, holding off eventual fellow 2022 first-timers Ross Chastain and Reddick to do so. Briscoe’s season has been less DNF-y but still inconsistent, scoring four top 10s but suffering several races that ended with the No. 14 way down the running order.

Chastain, meanwhile, went on a tear. He’s already outpaced himself in nearly every statistical category from last season, has led more than 400 laps, has two wins and a streak of four straight top-three finishes early in the year, which led to his maiden win. His second came a month later, and while he’s certainly rubbed some drivers the wrong way with aggressive racing, Chastain’s most recent four races have seen increasingly ascending results of eighth, seventh, fifth and fourth.

His Trackhouse Racing Team stablemate Suarez also finally scored his first win, though he had to wait for mid-season and Sonoma to do so. Both drivers at Trackhouse have similarly journeyman-esque stories: Suarez’s meteoric rise to Xfinity and subsequent championship landed him in the then-recently vacated JGR No. 19 in Cup, where he struggled to put races together and eventually went to Stewart-Haas Racing and then Gaunt Brothers Racing, in a sort of purgatory until he was picked up by Trackhouse.

Last year helped Suarez find his footing with the team and featured a few impressive runs for a journeyman driver and fledgling team, but the acquisition of Chip Ganassi Racing’s assets, addition of Chastain and advent of the Next Gen car helped Trackhouse rocket to the front of the pack. Suarez’s victory landed both cars in the playoffs.

While the post-win sample size is small, Suarez has finished in the top 10 in a third of 2022’s events and has put together a couple solid drives in the two races since the victory, finishing 15th at Nashville Superspeedway and fifth at Road America in a double top-five effort for Trackhouse.

Finally, Reddick has zero post-win starts to date, but we all know how close he’s been to wins at Phoenix Raceway, Auto Club Speedway, Bristol Motor Speedway dirt and other places — he even finished second at Darlington Raceway. The results were there, but he just needed the break to get that first win.

After Reddick, just about every driver on a major team has scored a win at some point in their Cup career, but that’s not to say there isn’t the potential for more surprises. With Atlanta looming this weekend — a pseudo-superspeedway, if you will — plus Daytona and Talladega before the end of the slate and several road courses, we could see a couple more guys rolling into victory lane for the very first time before 2022 is over.

It’s a lineup of five drivers like The Usual Suspects, though in less crime-centered circumstances. Rookie Harrison Burton, in the Team Penske-allied Wood Brothers Racing No. 21, has watched both Cindric and Joey Logano win points races and Ryan Blaney the All-Star Race. As for Burton, he flipped at Daytona and has yet to record a top 10 this year. Fellow first-year Ford driver Todd Gilliland, with Front Row Motorsports, also has yet to record a top 10. Burton has a pair of top-15 efforts, beating Gilliland out slightly for the overall best result in 2022.

Corey LaJoie is no slouch either, finishing in the top 15 in all three superspeedway races in 2022.