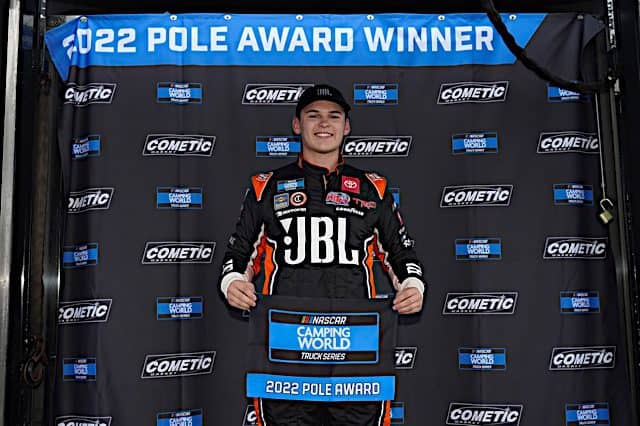 In an afternoon of heavy rain, Corey Heim led the NASCAR Camping World Truck Series field in the first round of qualifying at Mid-Ohio Sports Car Course with a speed of 69.181 mph.

With the rain continuing to pick up through the afternoon, NASCAR elected to cancel the final round of qualifying. Thus, Heim was awarded the pole for his speed in the first round.

Heim will be joined on the outside by Parker Kligerman, who will make his first front row start in the Truck Series since 2012. Behind them, Carson Hocevar clocked in third for his fourth consecutive top-three start.

Matt DiBenedetto qualified sixth, tying his best start of the season. Tyler Ankrum clocked in seventh and was the last of seven drivers to break the 2-minute barrier.

Justin Marks was eighth fastest for his first NASCAR race since 2018, while Dylan Lupton qualified ninth for his first start of the season. Taylor Gray rounded out the top 10.

Drivers struggled for grip in the rain, as there were numerous spinouts throughout both sessions. A handful of drivers spun out multiple times in a single lap.

The only incident in qualifying where a truck received damage was when Kris Wright backed his No. 44 truck into the pit wall while rounding the final turn of the track.

With 36 entries, every driver qualified for the race.