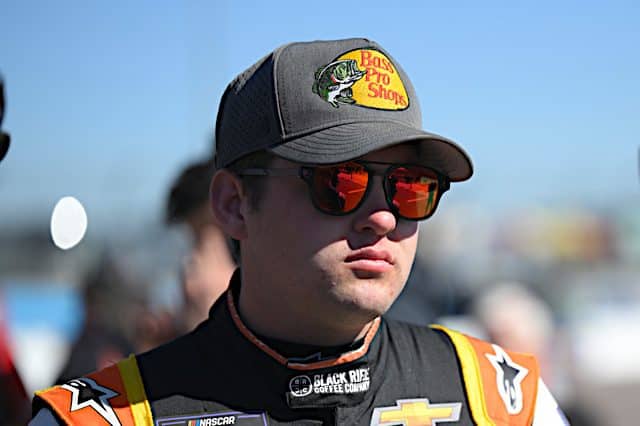 Noah Gragson committed an inexcusable offense on Saturday (July 2), and left unchecked, it could alter the landscape of NASCAR going forward.

On Saturday, I set up my DVR to record the Henry 180 at Road America, as I was traveling to an antique tractor show and would miss watching the NASCAR Xfinity Series race live. Saturday would be the best day for the show, and I had other plans for Sunday and Monday. Sometimes technology has its advantages. But on my way home from the show, I received a text from my friend, Bryan:

I was stopped at a light and didn’t have time to look up exactly what happened, nor did I suspect the severity of what transpired — and the aftermath.

On lap 25, Gragson’s car darted to the right on the straightaway between turns 3 and 5 and collided with Sage Karam, driving Alpha Prime Racing’s No. 45 entry. Dust bellowed from the No. 45 car’s rear and right side as he slid through the grass. Some drivers like Brandon Jones and Josh Berry were able to avoid disasters. Others were not so lucky.

Landon Cassill, Myatt Snider, Tyler Reddick, Brett Moffitt and Brandon Brown were collected in the dust bowl of mayhem. The interval from initial contact between Gragson and Karam to the time NBC displayed the caution on TV was 13 seconds.

The whole situation initiated when Karam and Gragson hit in turn 1. Karam appeared to take the middle lane, giving Gragson the inside around the corner.

But Gragson turned the corner as tight as Karam likely suspected, and their car doors hit. Their contact led to Ty Gibbs passing Karam before turn 2 and Gragson before turn 3.

Karam followed Gibbs on the inside of Gragson. As the pair exited the corner side-by-side, Gragson’s car did dip off the track, but that was not out of the ordinary for the race. Several cars were doing that by themselves with no pressure.

Then it happened. Gragson’s car turned right and into the left side of Karam just before the Sargento Bridge.

It’s rather unfortunate that NBC did not have more cameras — even unmanned, stationary cameras — that could’ve helped paint a better picture, not of what happened, but of the vicious impacts drivers experienced and exactly what they could and couldn’t see.

Outside the medical center, Snider told Frontstretch that what he heard and saw was “racing in an unprofessional manner.”

Brown, who took one of the hardest hits in the accident, said, “There’s no reason to turn someone down a straightaway, especially in an area where there’s no spotters.”

Karam expressed over the radio following the incident and at the medical center that Gragson just “flat out turned into me.”

When you watch the replays, it’s hard to argue that Gragson didn’t deliberately turn his wheel right into Karam’s car.

“He [Karam] forgot the three times he would throw it off into the corner and door us and run us off the racetrack,” Gragson told NBC. “Eventually, you get sick and tired of it. I hate [that] people’s stuff got torn up, but I mean, three is a bit ridiculous just today and including the past. I take responsibility. I hate it for his guys, but we’re fighting to race for a championship here. Just really over getting run over.”

Gragson walked right up to the line of saying he intentionally wrecked a competitor without crossing it, and essentially owned that he wrecked Karam on purpose.

NASCAR absolutely could have put the caution out sooner. Common sense tells you that in a high-speed section of a track with conditions resembling Road America’s, once a car gets sideways, the caution should fly. There is a bridge right there, the track narrows up and there was a swarm of cars behind the point of initial contact.

Does a caution save every car from receiving damage? No, but it does signal that there is a situation on the track that deserves caution — that’s literally why we call it a caution. The impacts could have been less severe and maybe even less expensive for teams to fix. In the grand scheme of the race, 13 seconds isn’t a long time, but a large chunk of the track was traversed in that time frame.

After the race, Karam’s car owner Tommy Joe Martins tweeted that it was “Absolutely on purpose” and tagged Gragson’s car owners Kelley Earnhardt Miller and Dale Earnhardt Jr., saying “I’m sure you’re embarrassed to even be associated with that.”

Absolutely on purpose. @EarnhardtKelley @DaleJr I’m sure you’re embarrassed to even be associated with that. Hard racing and bumping a guy back I get but that kind of stuff can hurt someone. It’s too much.

Earnhardt Miller, vice president of JR Motorsports, responded to Martins’ tweet and defended Gragson, saying she wasn’t embarrassed by the actions of her driver.

I’m not embarrassed. I understand you are upset rightfully so. Our team will sort out what we need to with Noah and move on. The highs and lows are all part of what we do.

Even if Karam was leaning on Gragson multiple times in Saturday’s race alone, there is a difference between intentionally wrecking a fellow competitor and simply moving them out of your way. Gragson isn’t new to using his bumper to move a competitor or using one up. He did it to Gibbs at Portland International Raceway one month ago when he made a pass for the lead.

Does NASCAR need to intervene in this particular situation? Nine times out of 10, I’m going to say no. But this time is different.

Gragson’s competitors were upset and called his driving dangerous and unprofessional. From what video evidence exists to the public, it’s hard to argue that Gragson didn’t intentionally wreck Karam. On top of that, Gragson finished the race with no steering issues, which may have been his only defense to the situation.

In 2011, NASCAR suspended Kyle Busch for the remainder of the Texas Motor Speedway weekend when he wrecked Ron Hornaday under caution during the NASCAR Camping World Truck Series race. NASCAR suspended Matt Kenseth for two races for intentionally wrecking and targeting Joey Logano at Martinsville Speedway in 2015. And in 2019, Johnny Sauter was suspended for one race for intentionally wrecking Austin Hill in a Truck race at Iowa Speedway.

The precedent is established, and NASCAR needs to take action. Ever popular amongst the fans, Gragson wears his emotions on his sleeves and is unapologetically himself. He races hard, and Gragson incorporates the checkers-or-wreckers mentality to his race craft every lap when he is at his best.

Gragson’s popularity, the team he drives for and his sponsors are all big time, but none of them should deter NASCAR from suspending him for his on-track actions. Because if NASCAR doesn’t suspend Gragson, they set a new precedent that could create an open season for retaliation.

Another aspect NASCAR must take into consideration is the fact that Karam is not an established NASCAR driver. He has spent the majority of his career in the NTT IndyCar Series. What opinions will develop by drivers outside of NASCAR interested in racing in it, whether they are well versed in the culture or not?

Rubbing and bumping is stock car racing. Intentionally wrecking a driver because they have gotten into you, or are in what you view as inferior equipment, yet on a given day is faster than you, is inexcusable.

NASCAR shouldn’t fear that suspending Gragson will jeopardize his championship hopes. When they suspended Sauter in 2019, they gave him a waiver, and the same could be done for Gragson, whether you agree with that precedent or not. Whether it’s a one- or two-race suspension, Gragson still wouldn’t be able to gain playoff points or championship points.

The decision to intentionally wreck Karam was the most indefensible thing Gragson has done behind the wheel, and the sanctioning body must address it. The Earnhardt siblings will likely discuss the incident with him, but I highly doubt they will sit him out for a race.

As the sanctioning body, NASCAR must step in and reiterate to all NASCAR garages that there is zero tolerance for intentionally wrecking another driver at any track and under any conditions.

i doubt anything will be done but a slap on the wrist to noah. just based on who the team owner is. noah is a hot head, needs anger management.

Since this story was posted, that is exactly what happened, slap on the wrist ($30K fine and loss of points). He should have been parked during the race and then suspended for a couple of weeks to torpedoe his title chances.

Much ado about nothing. Obviously a dumb move for a number of reasons, but nothing that isn’t done in the “boys have at it” world all the time. The media – and some fans – are upset because of the ugly result – but can’t have it both ways. If a driver does that job well, and only moves or even wrecks the object of his fury without impacting anyone else, it’s all good, right?

He needs a psychiatric evaluation before driving another lap. There’s something seriously wrong with this bum.

If the owners of the 9 car aren’t embarrassed about what happened. Then they have an unnaturally high embarrassment tolerance. As a former car owner, if a driver of mine had pulled something like this. They have been out of a ride as soon as they climbed out of the car. I don’t see how you could face other owners whose cars were damaged or destroyed. After you’ve just blow it off. This was far from just an internal team issue.

As NASCAR management does play favorites, I don’t expect anything but lip service, if that, from them.

I wonder how Kelley’s going to feel when the drivers who Noah wrecked at Road America make sure that the #9 ends up on the back of a tow truck during each of the Playoff races.

He is a spoiled brat and a punk. Toss him into the crowd away from the overgrown underachievers on his crew and let natural selection take its course. As the old Hank Jr. song, “some sticks to the head and kicks to the shins and a couple of bites from Rin Tin Ten and I couldn’t wait to get into that cell.”
Old Noah would get straightened out by many adults. Sad, but he needs to change. Got a ton of talent.

Where was the tractor show, and what was the feature? I grew up in a vintage Allis Chalmers family in WI and still make it to those shows periodically.

There is a big difference between intentional wrecks on a superspeedway and a road course. Flat out.

For example with Carl Edwards, that was a risk due to airborne cars and fan safety

Tom B
Reply to  icono

David Gililand got parked by NA$CAR for intentionally wrecking a driver at a Super Speedway several years back.