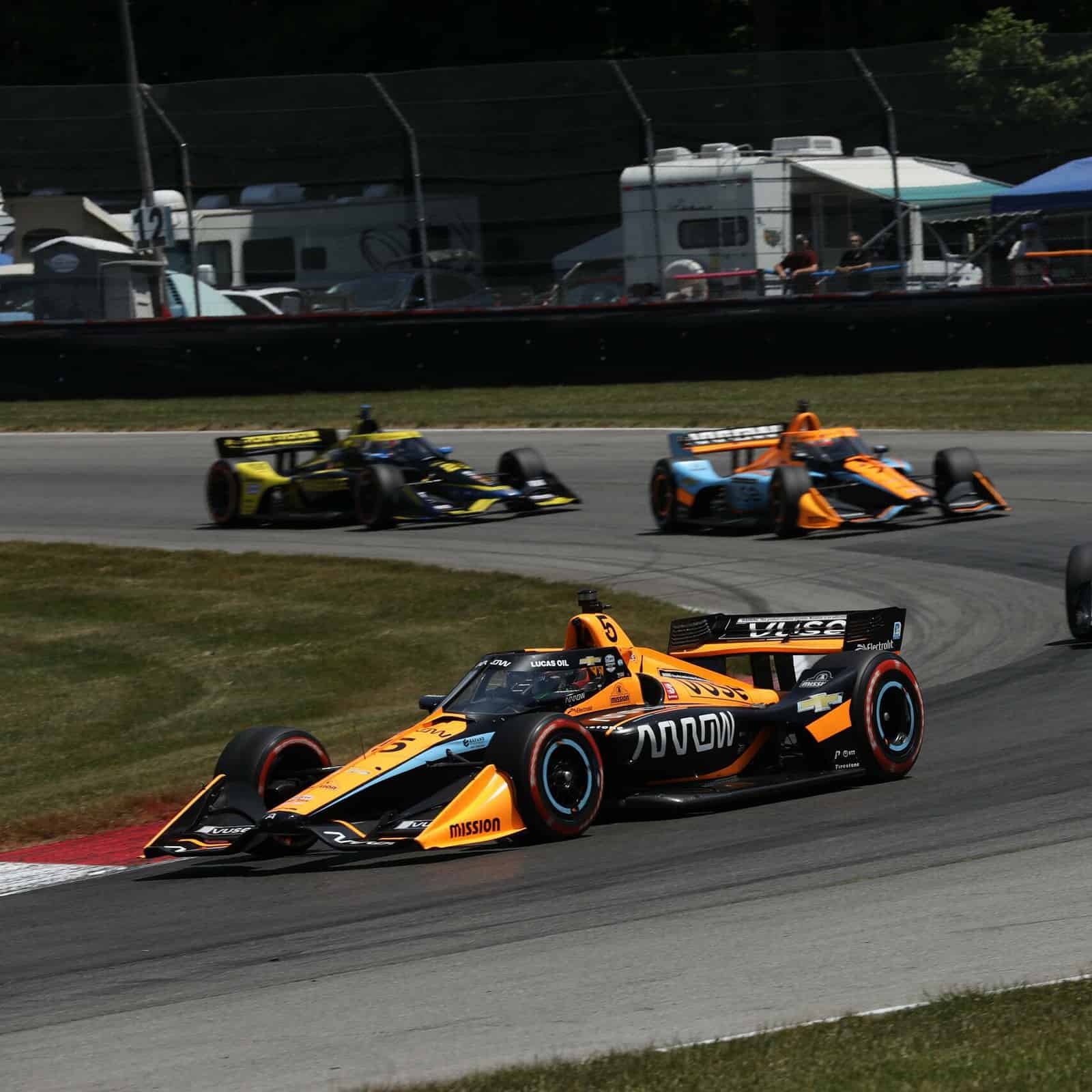 Rosenqvist’s car had trouble early in the 80-lap race around the 13-turn, 2.258 mile road course. After starting the ninth lap of the race, the No. 7 Chevrolet went through The Keyhole and did not gain any speed on corner exit. Rosenqvist felt like he was on the pit limited and pulled the clutch. After gaining some speed, but at the end of the straightaway the car lost power completely with a cloud of white smoke trailing as the car slowly came to a stop in the grass approaching turn 4.

Rosenqvist had moved up to third place at the start of the race and had a possible podium position in front of him, but instead the Swedish racer had to climb out of a smoking car as he fell from eighth to 11th in the IndyCar Series points standings with a 27th place finish.

“I’m not sure what happened, I have to look into it,” Rosenqvist said. “It’s just unfortunate, we had a really really really good run. I mean, I feel for all the Arrow McLaren SP guys that worked so hard this weekend. I think we had a mega weekend going, we were off strategy on the black tires and we actually managed to move up from fourth to third, so yeah, it was a big loss for us today.”

At the time his car came to a stop, Rosenqvist was the first driver in the field that was on the Firestone black sidewall primary compound tires. INDYCAR mandates that on road/street course races, all drivers must run at least two laps on the black primary tires and the red sidewall alternate compound tires. Rosenqvist was more than likely going to run the red tires for the rest of the race, even though Scott McLaughlin in first place at Alex Palou in second place both had the primary black tires on ahead of 14 cars on red sidewall tires at the end of the race.

“I just felt like we were sailing out there,” Rosenqvist said. “And I think, anyways, we showed again that we’re up there and we were fighting for podium positions. We just have to come back and do it all again.”

For O’Ward, his mechanical problems started in the half hour Sunday morning warmup session. O’Ward radioed his race strategist and AMSP team president Taylor Kiel that the engine died and then came back to life again. That prompted the following exchange.

“We’re okay to continue,” Kiel said. “It was a plenum event, so all good.”

“Well why is that happening,” O’Ward asked.

“Frank will fix it. He knows what’s going on. We’re good,” Kiel replied.

O’Ward led the first 28 laps of the race, but midway through his first stint hit the radio button and said that something was wrong with the car.

After O’Ward’s first pit stop on lap 29, this year’s Barber Motorsports Park winner exited the pits in fourth place behind McLaughlin, Palou and Colton Herta. However, that was only the start of a slow decline that steadily progressed.

The 2018 Indy Lights champion stayed in fourth place for several laps before falling to fifth on lap 43.

Eight laps later, O’Ward was 18th. After his second pit stop on lap 52, O’Ward tried to pull away from his pit stall, but the car had no drive. The No. 5 Chevrolet remained silent at the end of the slow lane just before the end of the pit wall with what O’Ward said was a fuel delivery issue.

“It just kept getting worse and worse and worse and then it just failed,” O’Ward said. “Yeah, it’s a bummer, man. It’s frustrating, it’s frustrating because we’ve thrown away I think an easy podium for us there. We had a lot of pace, we’ve had a lot of pace during the weekend. The car was really well put together for qualifying and I’ve tried to do my job the best I can, and I don’t want to pull on any horns and say what was the issue, right, but I think we all saw what went on there.”

O’Ward was credited with a 24th place finish and fell from fourth to fifth in points.

The next IndyCar Series race is the Honda Indy Toronto on Sunday, July 17th at 3:00 p.m. ET. The race will air live exclusively on Peacock.