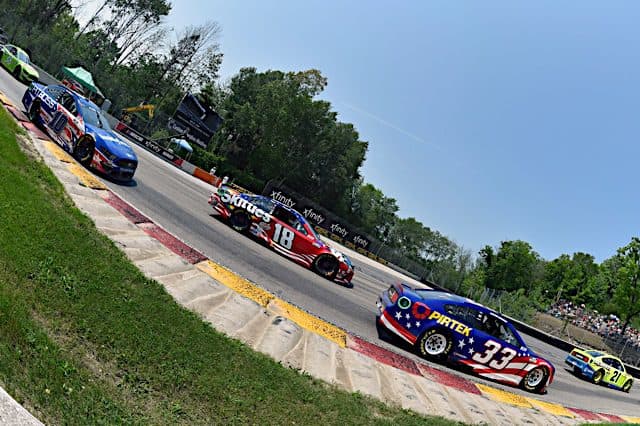 We’ve already been through track-specific NASCAR stats and the decline of the ringer when talking about road courses in this column in 2022, but Road America looms ahead for the NASCAR Cup Series field.

“It’s all in the reflexes.”

It feels appropriate, given that the day before Cup takes to Road America marks the 36th anniversary of the film’s release and that those reflexes need to be on point when these road course races get underway.

So, with the season hitting its exact halfway point after this weekend’s race at Elkhart Lake, let’s take a look at the chances for the most prominent drivers without a victory of 2022 at the 4-mile Wisconsin circuit.

The parity (there’s that buzzword again!), though, has led to some surprises. Suarez had previously been solid at road courses, winning a stage at Watkins Glen International way back with Joe Gibbs Racing, but thoroughly dominated the late stages of Sonoma en route to the win. His Trackhouse Racing Team stablemate in Ross Chastain put together a great run at Circuit of the Americas and was there at the end, trading paint with AJ Allmendinger and Alex Bowman and scooting away for the win.

The finish to today's NASCAR race at COTA.

Ross Chastain gets the last punch on AJ Allmendinger and Alex Bowman.

That said, there’s a few outliers who haven’t been to victory lane on a road layout yet, or won a race in 2022, period. Let’s break down which drivers still seeking a win in 2022 have been historically best at making left and right turns.

Before that, a moment is needed to reflect on how last year’s race at Road America — actually on July 4 — went for some of these folks.

See also
Predicting the Championship 4 in a Season of Parity

Hendrick Motorsports dominated the day laps-led-wise, with eventual winner Chase Elliott starting near the back but leading 24 circuits. Late mistakes set teammate William Byron, out front for 15 laps, back to a 33rd-place finish, while Matt DiBenedetto was also competitive, leading 10 circuits.

Of those three drivers, two have already won in 2022 and the other is no longer in the Cup Series, so it’s anyone’s game to unseat defending race winner (and most recent 2022 winner) Elliott.

Three names in Road America’s 2021 top 10 have yet to win a Cup race in 2022. Christopher Bell came home second, having won at the Daytona International Speedway road course earlier in the year. Tyler Reddick, oh-so-close this season on multiple occasions, also claimed a top-10 finish with an eight-place effort, while Martin Truex Jr. came home ninth. The No. 19 team has been the most notable absence from victory lane in 2022.

If the weather’s any indication, it’s supposed to be sunny all weekend long at the Badger State’s road course, perfect conditions for some of these drivers to pursue their first win.

Chris Buescher: Chris Buescher turned some heads as he closed in on Suarez as the laps wound down at Sonoma, but the No. 17 wasn’t quite able to get there. It capped off a crazy three weeks for the 2015 Xfinity champion, as he went from flipping wildly at Charlotte Motor Speedway to being sidelined with COVID-19 to his best finish since he won at Pocono Raceway in 2016.

It shouldn’t be a surprise that he was that close, though. Since the beginning of 2017, Buescher has finished outside the top 20 on a road course just once. Between Sonoma in 2017, where he finished 19th, and the runner-up at Sonoma in 2022 — a total of 19 races — Buescher recorded 18 top-20 results, including three top fives, nine efforts inside the top 15 and an average finish of 13.89.

Kevin Harvick: Winless for nearly two years now, Kevin Harvick has a pair of road-course triumphs, one at Sonoma and one at the Glen. At the two staples, his results are generally hit-or-miss but favor Sonoma, and include a five-race stretch of finishes of sixth or better in wine country.

Of the more recent road course contests from the start of the current decade, it’s sink-or-swim for “The Closer” at road courses. In the 11 road course events since the 2020 season began the results are split almost evenly throughout the field. The No. 4 crew will likely have a very solid day (three top 10s), a middling one (five finishes between 11th and 22nd) or a terrible, horrible, no-good, very bad race (three finishes of 27th or worse).

This year has featured an 11th at COTA and fourth at Sonoma, and at times Harvick looked like he might be able to chase down the leaders. With 651 full days since his last win as of this Saturday going into Sunday, Harvick is still searching for that breakthrough (which is weird to say for a guy with 58 career wins).

Martin Truex Jr.: Back-to-back Xfinity champion Truex won his first Cup race at Dover Motor Speedway in 2007 and promptly fell off the face of the earth for a while.

Well, not really. But it did take him six entire years to win another race, and that came at a road course at Sonoma in 2013. His first nine years had one victory; his most recent nine full seasons have featured 30 (plus a championship).

That’s a hell of a run when you split his season into two halves. Road courses were Truex’s forte for a few years during his title years, adding two more Sonoma wins and a Watkins Glen triumph to his resume. He almost won at the Charlotte ROVAL, too, but final-corner chaos derailed those hopes. He also scored top-10 finishes at the ROVAL in 2019 and in 2020’s two such races.

In the road course-heavy schedule of 2021, Truex’s results were largely positive: after a 12th at the Daytona road course, the rest of his right-turn campaigns were bookended by horrendous runs at COTA and the ROVAL. In between, though, came three top 10s and one 15th, which came at Indianapolis Motor Speedway’s road layout. A little more hit-or-miss for Truex of late, but still a threat when it comes to turning the steering wheel both directions.

Tyler Reddick: There’s a smaller sample size to Reddick’s road-course history, but it’s relatively impressive nonetheless. Reddick had to wait through the COVID-19 stoppage in 2020 before he got his first Cup try at such a track, but kicked things off with an 18th at Daytona’s winding layout and followed it up with a 12th-place run at the Charlotte ROVAL.

Since then, he’s recorded a pole at COTA in 2021 and five top-10 finishes at road courses. His average finish hovers just under 16 at 16.1, but that’s swayed by two outliers of 35th or worse. Take those out, and Reddick averages an 11.56-place result at road courses.

Ryan Blaney: Ryan Blaney blew everyone out of the water last year when he caught fire near the end of the regular season. The No. 12 team was already in the playoffs, thanks to an early win at Atlanta Motor Speedway, but back-to-back wins at Michigan International Speedway and Daytona catapulted him into the playoffs with every bit of momentum a driver could ask for.

Though Blaney was eliminated after the round of eight, his three wins were a career high. He’s yet to visit victory lane in a points-paying race in 2022, but does have the All-Star Race win, and Road America might be a place to rebound after a mediocre showing there last year.

Historically, road racing has been a relative specialty for Blaney. He finished in the top 10 at both such tracks in 2017, won the ROVAL in 2018 and scored top-10 finishes at all three road courses in 2019. Last year was a bit more all over the place for Blaney at the layouts, but he did record a second-place finish at Indianapolis and has been top 10 at both road courses so far in 2022.

Bubba Wallace: Remember the “Bad Luck Blaney” memes that circulated Twitter when the driver of the No. 12 could never catch a break over the last few years? It kind of seems like that misfortune has transferred to his friend in Bubba Wallace, who’s had almost nothing but bad luck in 2022. Wallace has finished in the top 20 in just shy of half of this year’s races, but pit road mishaps, late chaos or other factors have seemed to send the No. 23 plummeting down the running order. He was just outside of the top five nearing the checkered at Talladega but was hooked into the wall, and was in the top 10 as the field neared the line at Atlanta before being caught up in a crash as well.

While new teammate Kurt Busch has a win and a playoff spot, Wallace needs to turn his season around as the playoffs near. Wallace didn’t score his first notable road course finish until 2021, where a 13th-place effort at Indianapolis and a 14th at the ROVAL proved to be his best yet at winding layouts. They haven’t been kind to him this year, with results of 38th and 36th at COTA and Sonoma, respectively.

Other threats: Michael McDowell has a win at Road America, where he led half the Xfinity race in 2016 for Richard Childress Racing. He was always solid at road courses, particularly Watkins Glen, but finished eighth at the Daytona layout in 2021 on the heels of his 500 win and seventh at COTA, adding the runner-up at Sonoma a few weeks ago for good measure. Elkhart Lake wasn’t kind to him last year, though, as the No. 34 finished 30th.

Road America’s 2021 runner-up, Bell, might have something to say about the outcome this weekend, though. He has an Xfinity win there and like Reddick had to wait until the Daytona road course in 2020 for his first Cup race at such a track … and won there in the second race of the year one season later. COTA and Sonoma weren’t kind to the No. 20, but the second-place finish at Road America gave way to Bell running seventh at Watkins Glen. He then bounced back from a terrible Indianapolis to finish eighth at the ROVAL and so far this year has finished third at COTA and 27th at Sonoma.

Allmendinger isn’t full time, so we’ll leave him off this list, but the recently-rejuvenated 2014 Watkins Glen Cup winner is always a threat. A few other ringers join the mix in Joey Hand, Kyle Tilley and Loris Hezemans.