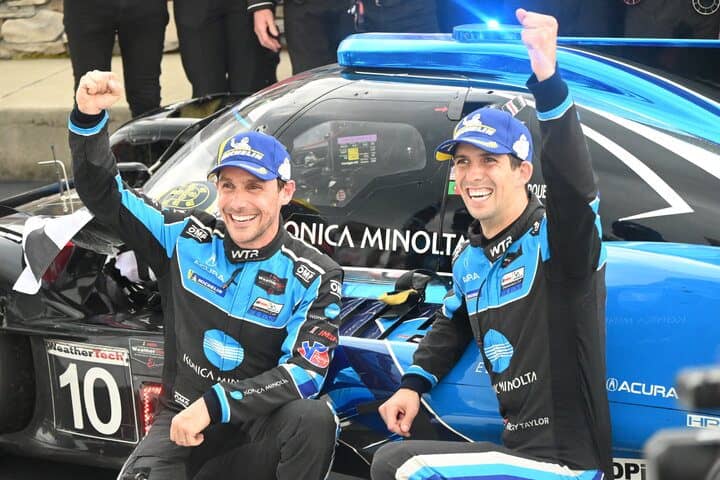 WATKINS GLEN, N.Y. – It was all Acura, all the time Sunday (June 26) at Watkins Glen International.  Wayne Taylor Racing’s Filipe Albuquerque was able to slip past Meyer Shank Racing with Curb-Agajanian’s Tom Blomqvist with just over 20 minutes remaining and held on to win the Sahlen’s Six Hours at the Glen.  It is the third win of 2022 for Albuquerque and Ricky Taylor.

Meyer Shank Racing with Curb-Agajanian’s Tom Blomqvist led the field from pole, but Wayne Taylor Racing’s Filipe Albuquerque wasn’t just about to settle in.  He made a move for the lead on the first lap under braking for the Inner Loop and made it work to take the advantage.

The first third of the race was run in a start-and-stop fashion.  The adverse action started 14 minutes in when Riley Motorsports’ Gar Robinson spun exiting turn 1 on his own.  Forty7 Motorsports’ Anthony Mantella spun on the curbs while trying to avoid Robinson and hit the tire barrier.  Blomqvist just barely avoided the incident in his Acura.

Later on, Sean Creech Motorsports’ Dr. Lance Willsey collided with Andretti Autosport’s Jarett Andretti entering turn 1, spinning both cars out.  Andretti was able to drive away with a slight tire rub, but Willsey was unable to get going, bringing out another caution.  At the same time, DragonSpeed’s Henrik Hedman lost his left front wheel exiting the Boot.  The wheel shot off and hit the tire barrier in turn 9, bouncing high into the air before coming down safely.

On the restart from that caution, Andrew Wojteczko Autosport’s Orey Fidani spun under braking for the Inner Loop and hit the Armco barrier to bring out another yellow.  The team was able to make repairs, but ended up five laps down.

After a short 15-minute run, the engine expired in the Muehlner Motorsports America No. 6 driven by Dillon Machavern in the Esses.  This wasn’t one of those times where it simply died.  The engine went up in a large plume of smoke, fluids and some fire as well.

An incident that didn’t cause a caution saw Andretti have contact with Riley Motorsports’ Kay van Berlo exiting the Esses, shoving van Berlo onto the grass in the process.  This resulted in a drive-through penalty for Andretti.

A few minutes later, AWA’s terrible day was sealed when Lars Kern spun the No. 13 exiting turn 1 and went hard into the tire barrier.  Kern was ok, but his day was over.

The stricken AWA Duquesne being loaded back into the paddock. It is a mess. #Sahlen6hr pic.twitter.com/dth3ahrfvw

In practice, this day was even worse than it appeared on paper.  The Forty7 Motorsports No. 7 was being run by AWA (the car is the Duqueine M30-D08 chassis that Mantella races in IMSA Prototype Challenge).

Following Kern’s crash, things began to calm down as drivers were finally able to get into a rhythm.  Through all of this, Wayne Taylor Racing and Meyer Shank Racing with Curb-Agajanian continued to monopolize the top two positions.

Things changed halfway through the fifth hour with the most serious crash of the day.  High Class Racing’s Fabio Scherer and Racing Team Nederland’s Dylan Murry were racing for second in LMP2 when they encountered the slower GTD-class Lamborghini of CarBahn Motorsports with Peregrine Racing’s Jeff Westphal.  Westphal pulled to the right side of the track in order to allow Scherer and Murry to pass.

However, when the two LMP2 drivers went to pass Westphal, they were side-by-side and started having side-to-side contact.  A mistimed bump sent Scherer across the track and into Westphal.  Westphal had nowhere to go but head-on into the wall just before turn 7.  Westphal then crossed the track and hit the tires in turn 7.  He was able to walk away from the crash, but his Huracan GT3 Evo was thrashed.

Shortly after the caution came out, lightning struck within eight miles of the track.  As per the norm, this meant a 30-minute complete stopdown.  Subsequent strikes extended the delay.

At the time the red was displayed, it had not rained at Watkins Glen International.  However, the winds began to kick up and eventually, the rain did come during the delay briefly.  By the time the red flag was cleared, the sun had come back out and the track was dry again.

During the delay, the clock was reset to 35 minutes remaining, which added 10 minutes to the actual race distance.  Once pit stops were made and time under yellow, there were 21 minutes to go when the green came back out.

Blomqvist was in the lead with Albuquerque right on his tail.  Through the Esses, Albuquerque was able to gather up a big run on Blomqvist and moved to the outside.  In a near carbon copy of the first lap of the race, Albuquerque swept past to take the lead.

Despite the pass, Blomqvist was able to keep close to Albuquerque.  That meant that when the leaders caught slower GTD traffic, it was a free-for-all.  Chip Ganassi Racing’s Sebastien Bourdais was right there as well.  The race wasn’t truly settled until Blomqvist got held up by a slower car in turn 1 on the final lap.  That allowed Albuquerque and Ricky Taylor to take the win.

LMP2 was dominated early on by PR1 Mathiasen Motorsports.  Ben Keating started on pole and led early over teammate Steven Thomas prior to both teams getting hit with penalties.  This stemmed from a round of stops under yellow.  Keating technically got out in front of Thomas, but did not fully clear him.  As a result, he had to give way to Thomas.

Then, Thomas ran the red light at the end of the pit lane, which is a no no.  While Keating got a drive-through penalty, Thomas got a stop and 60-second hold, which effectively cost him a lap.

Late in the race, it looked as if DragonSpeed would be in position to claim the victory.  Juan Pablo Montoya was leading when the red flag came out and looked good for victory.  However, he was forced to pit for fuel shortly after the race resumed.  During that stop, Juan Pablo got out of the car in favor of his son, Sebastian.

The stop dropped Sebastian down to fifth.  Shortly after the restart, the team was hit with a penalty for removing equipment.  This confounded Juan Pablo as nothing was improper with the stop.  Turns out that the penalty was for an infraction from before the red flag.

Scott Huffaker ended up with the class lead in the closing laps, but with a charging Louis Deletraz closing in.  The race came down to the last lap as Deletraz made a move on Huffaker on the last lap exiting turn 11.  Huffaker was able to out-drag Deletraz to the line for the win for himself, Keating and Mikkel Jensen.

Scherer, Dennis Andersen and Anders Fjordbach were fourth after the contact.  No penalty resulted from the situation in the booth.  DragonSpeed’s Henrik Hedman, Juan Pablo and Sebastian Montoya ended up fifth.

LMP3 saw FASTMD Racing’s Nico Varrone start from the pole and lead early.  Despite that, this race was dominated by the Riley Motorsports trio of Robinson, van Berlo and Felipe Fraga.  Even with the incident that saw van Berlo end up in the grass, Riley Motorsports was able to build up a full lap over the rest of the class, much of whom fell victim to the aforementioned early incidents.

Fraga was forced to make a late pit stop for fuel after the final restart, but with a lap in hand, they could do it and still not have to worry about pressure en route to the win.  The margin of victory was 39.998 seconds over CORE autosport’s Jon Bennett, Colin Braun and George Kurtz.  Despite a trouble-plagued weekend, Andretti Autosport’s Andretti, Gabby Chaves and Josh Burdon ended up third, followed by Performance Tech Motorsports’ Dan Goldburg, Rasmus Lindh and Cameron Shields.  Varrone, James Vance and Max Hanratty were three laps down in fifth.

Both of the GT classes ended in drive-time issues.  As a result of the red flag for lightning, the minimum drive-time was cut down to 77 minutes in the Pro-Am classes and 39 minutes in GTD.  With the early cautions and the red flag, multiple teams ended up running afoul of the regulations.

In GTD, HTP Winward Motorsports had a very calm race in their Mercedes.  Late in the race, Philip Ellis was able to place his car in front of a number of GTD Pro cars.  This gave him a nice cushion after the final restart and allowed him to pace himself.

Ellis was able to take the win on the track, but the team was moved to the rear of the class due to drive-time issues.  As a result, The Heart of Racing’s No. 27 Aston Martin for Roman DeAngelis, Ian James and Maxime Martin inherited the win, their first of the year.  They also beat all of the GTD Pro cars.

The red flag resulted in much of the GTD Pro class having fuel issues.  Risi Competizione had a fairly quiet day and was leading late with Daniel Serra at the wheel when they ran low on fuel.  Serra was forced to pit for a splash with a little under five minutes to go.  Pfaff Motorsports’ Mathieu Jaminet and Vasser Sullivan’s Kyle Kirkwood were forced to follow a lap later.

The stops put BMW M Team RLL’s No. 25 BMW M4 GT3 in the lead with John Edwards at the wheel.  He ended up winning on the track, but got his victory stripped due to drive-time violations.  That gives the win to The Heart of Racing’s Ross Gunn and Alex Riberas, a well-deserved triumph after being quick all weekend.

IMSA teams will be back in action next weekend at Canadian Tire Motorsport Park.  The Chevrolet Grand Prix will go green at 3:10 p.m. ET on July 3.  The race will air live on NBC starting at 3 p.m.