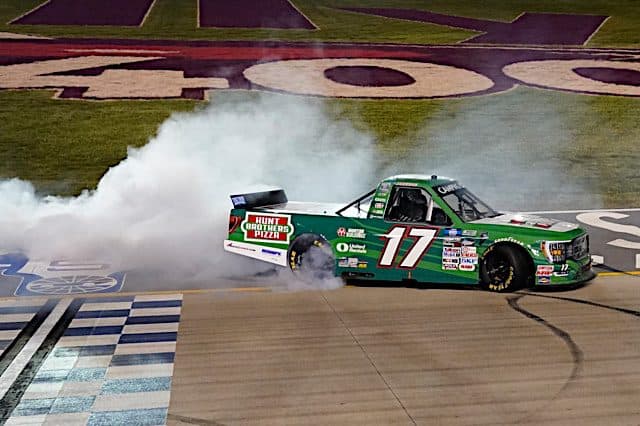 Ryan Preece picked up right where he left off in 2021 at Nashville Superspeedway, winning his second career NASCAR Camping World Truck Series race, both coming at the 1.33-mile oval in back-to-back years.

Preece and runner-up Zane Smith combined to lead 144 laps of the 150-lap event. Preece looked to have run away with the race after the final restart with 10 laps to go, but suddenly lost momentum with three laps to go, allowing Smith and Carson Hocevar to close to his bumper to give the fans a show for the last two laps. After Smith washed up the track on the last lap while attempting to pass Preece, Hocevar took second away. However, Smith crossed underneath Hocevar off of turn 4 to maintain second as Preece flashed under the checkered.

“I don’t ever like it to be that close,” Preece told FOX Sports 1, “But hats off to DGR [David Gilliland Racing] and this Hunt Brothers Ford F-150.”

In winning the race on Friday (June 24), Preece also won $50,000, as the race was the second leg of the Camping World Triple Truck Challenge. He also gets himself a second Gibson guitar.

“…We get a second guitar, I might have to start a band!”

David Gilliland Racing has now won back-to-back races in 2022, after Todd Gilliland dominated at Knoxville Raceway to take the win in the same No. 17 that Preece won with.

Jack Wood’s rookie campaign has been anything but smooth, and it continued tonight, as he was run into from behind by Crafton, sending him into the turn 4 wall hard just seven laps into the race. It was a disappointing and quick end to a promising night for Wood, who qualified 10th for the race, his best effort of the season.

Wood still described the incident as a racing deal, telling FOX Sports 1, “Matt is a good guy, I don’t think he did that on purpose.”

It’s worth restating that Preece and Smith were the class of the field, leading all but six laps combined on the night. So it shouldn’t be all too surprising that they split the stage victories tonight – Smith took stage one, while Preece captured stage two.

For the first time in what seems like forever, Todd Bodine was running like he was when he was racing for championships. The two-time Truck champion ran in the top 15 most of the night, and even scored some stage points, finishing ninth in his No. 62 in stage two. But a spin with 32 laps to go put him behind, and he ended up finishing a disappointing 27th, two laps down. With one more start ever in his NASCAR career (to put him at 800 career national series starts) coming at Pocono Raceway, Bodine looks to finish his career strong.

Although Majeski picked up his fourth straight top five, it didn’t come without some aggression. Right after the restart following Bodine’s spin, Majeski made a bold four-wide move to pick up as many positions as he could. However, for the other three drivers – Matt DiBenedetto, Corey Heim and Grant Enfinger – the move forced everyone into each other, and all three of them slammed the outside wall, with Heim and Enfinger seemingly taking the worst hits.

This crash had implications for all three drivers involved. For DiBenedetto, it put him even further into a must-win situation to make the playoffs. He came into the race 12th in points, 43 points behind Crafton for the final spot. Now, with two races left, he needs a win to make the playoffs. For Enfinger, his 68-point cushion over the cutoff diminished slightly. Enfinger shouldn’t be panicking just yet, but another bad finish could put 11th-place Derek Kraus right on his heels for a playoff spot. Not to mention, if someone outside the top 10 in points wins one of the next two races, that puts Enfinger into the 10th and final spot, making him the target driver that Crafton currently is.

For Heim, he isn’t playoff-eligible, but he was eligible to win $100,000. Heim won the first Triple Truck Challenge race at World Wide Technology Raceway, meaning he was the only one who was eligible for the $100,000. Although he wasn’t a huge threat to win the entire night, the crash cemented that he would not win the money at Nashville. The crash also seemed to knock the breath out of him, but all three drivers were okay after the crash.

Majeski took responsibility for the crash and apologized.

AM Racing tabbed Gutierrez to fill in for Austin Wayne Self, who is essentially on paternity leave after his wife gave birth during the Sonoma Raceway weekend. Gutierrez was up to the challenge, making the most of the opportunity in the No. 22 and coming home an impressive eighth in an underfunded truck.

“Well, since we first raced back in Charlotte [Motor Speedway], I learned as much as I can,” the 19-year-old told FOX Sports 1. “Now, here at Nashville it came out perfect for us.”

Gutierrez did have some bumps along the way, such as his qualifying time being disallowed due to the truck’s ride height being too low. Then he had a run-in with Hailie Deegan, spinning the No. 1 Ford to bring out the final caution of the night with about 15 laps to go.

But all-in-all, not bad for the Mexico City native in just his second career Truck start.

Preece has Nashville Figured Out

Last year, Preece led a grand total of eight laps, including the final seven after a spirited battle with Enfinger for the win.

He clearly learned a lot in those seven laps, as he had a career weekend, winning his first career Truck Series pole earlier in the afternoon and leading the most laps of anyone in the field, at 74.

Regardless of where he ends up in 2023, he’s got to come back and try to three-peat … right?

With two races left, Smith retook the points lead for the first time since he won the season opener at Daytona International Speedway. Not only did Smith take the lead, but he also opened it up, too. He now holds a 21-point lead over John Hunter Nemechek, with Ben Rhodes trailing in third, 30 points behind. While the top eight are still mathematically eligible to win the regular season title, it might be down to a four-horse race, with Chandler Smith lurking in fourth, 35 points behind.

Kraus incurred a 10-point penalty prior to the race, further hurting his playoff chances. He is now 29 points behind Crafton, who still hangs on to the final spot. Right now, it’s safe to say anyone outside of the top-10 needs a win to make the playoffs.

Gutierrez doesn’t technically qualify as a rookie, as he isn’t running for rookie of the year, but he’d definitely be the top-performing rookie if he was. Instead, Dean Thompson took that honor, as he came home 14th.

The Truck Series shifts gears – literally – and makes its way to central Ohio for the inaugural O’Reilly Auto Parts 150 at the Mid-Ohio Sports Car Course. Coverage begins at 1:30 p.m. ET on FOX Sports 1.