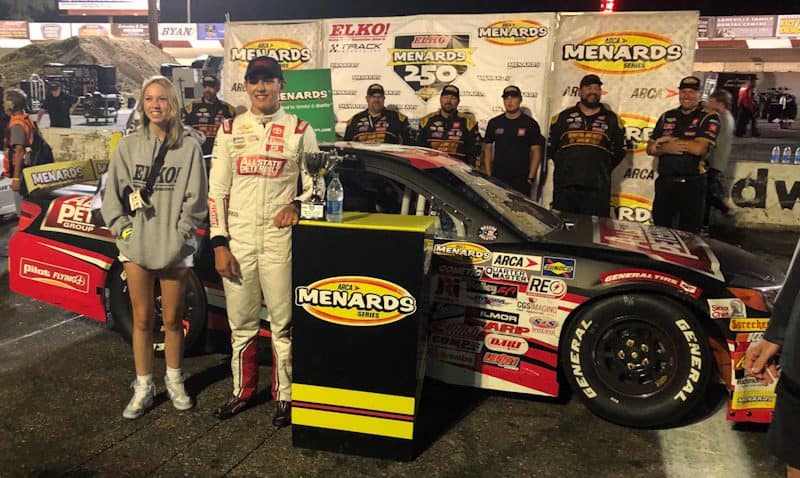 Sammy Smith scored his first ARCA Menards Series win last weekend at Berlin Raceway after mechanical gremlins knocked Daniel Dye out of contention after dominating. Smith showed tonight (June 25) that last week was no fluke, and he backed it up with his second straight win at Elko Speedway. This one came in dominating fashion, as he won the pole, led 233 of the 250 laps and cruised to the win by more than four seconds over runner-up Jesse Love.

“Feels way better to win it like this,” Smith said. “We kicked their butts today and just thanks to whole team, Allstate Peterbuilt Group, Pilot Flying J, TMC, Toyota, all these guys on the KBM team brought me a good car and here we are.”

Love finished runner-up behind Smith and was the only car that was able to challenge him for the lead in the early stages of the race. Both cars ran 1-2 from start to finish.

“Just [needed] a little bit here, a little bit there, maybe a little bit more lapped traffic to go our way, but at the end of the night we just needed to be a little bit better,” Love said. “We’ll go back to the shop and keep on working, I’ll see what I could’ve done better too, but obviously something to build off of. But as a team, we want to be upfront, dominant and be able to win this race next year.”

In an impressive debut for Venturini Motorsports, Landon Pembelton came home third behind the lead duo. Taylor Gray recovered from an early spin to finish fourth and Dye completed the top five.

Tom Hessert III continued his return to ARCA after a four-year hiatus in sixth; he was also the last car on the lead lap. Points leader Rajah Caruth came home seventh; with Nick Sanchez finishing 11th after an accident, Caruth will keep the lead heading into the July 8 race at Mid-Ohio Sports Car Course.

The green flag waved in daylight, and Smith quickly jumped out to an early lead over Love. The racing didn’t last long, however, as Gray spun after getting loose under Pembelton on lap 7. But no harm no foul, and Gray quickly made his way back inside the top 10.

Ninth-place finisher Mullins had an onboard camera in his No. 12 car, and it came in handy for race coverage. Mullins first got into the back of Bryce Haugeberg in turn 1 on lap 34 after Haugeberg thought he was clear.

An almost identical incident happened later on lap 49, as Toni Breidinger spun off the nose of Mullins in a similar manner to Haugeberg. Finally, Mullins drove in too deep into a corner and spun Sanchez on lap 136. After the third incident, Mullins was sent to the back of the line for the ensuing restart.

In the middle of the first two spins was the biggest action between Smith and Love out front. Smith led the first 44 laps, but Love fought back on a restart and asserted himself to the point of lap 45. He then held the lead until Briedinger’s spin, and on the ensuing restart, Smith and Love duked it out for the lead, running side-by-side for more than five laps. Smith was clear on lap 62 and took the lead back for good after withstanding a bump from Love on lap 63.

Smith cruised to the lap 75 break with a 1-second lead over Love. The race then resumed, and Hessert stacked up the field behind him after he was unable to get a good launch on the lap 83 restart. Sanchez got into the back of Hessert and suffered significant damage to the nose of his car; he was already off the lead lap by the time he was spun by Mullins on lap 136.

The drama picked up at lap 164, as the left front tire of Hessert’s car caught on fire while racing Caruth for sixth. But with the race break just 11 laps away, Hessert stayed on the track and the fire was able to extinguish itself.

Smith came into the lap 175 break with a three-second lead over Love. But on the ensuing restart, Smith wasn’t able to quickly pull away. Love kept the margin within a second for the first 10 laps after the restart.

On lap 193, the margin was down to two-tenths after Smith was held up by the lapped car of Colton Collins. In the nick of time, Smith was able to get around him before Love got to his bumper. And much to Love’s dismay, he too was held up by the same group of lapped cars. By lap 195, Smith’s lead was back to over a second.

During the final 50 laps, Pembelton, Gray and Dye duked it out for positions, just as they had done all night. But the race was all about Smith, as he topped Love by 4.119 seconds by the time the checkered flag waved. He led the final 189 laps of the race after taking the lead back for good on lap 62.

The Dawn 150 at Mid-Ohio Sports Car Course will take place on Friday, July 8, with TV coverage provided by MAVTV and FloRacing.