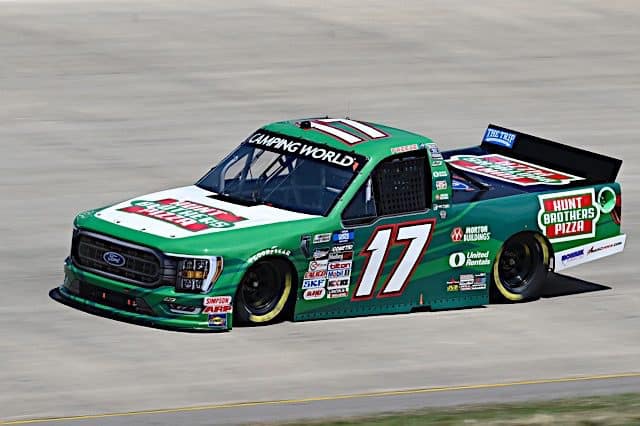 Nashville Superspeedway was the site of Ryan Preece‘s first NASCAR Camping World Truck Series win last summer, and it is now the site of his first Truck Series pole. With a speed of 160.925 mph, Preece topped the charts in Friday’s (June 24) qualifying session.

Preece will be joined on the front row by Zane Smith, who tied his career-best effort in qualifying. Carson Hocevar clocked in third; he has now started in the top three for the last three races.

Corey Heim was the highest qualifying Toyota in fourth and Derek Kraus was the fastest qualifier of eligible drivers below the playoff cutline in fifth.

Chandler Smith led the most laps at Nashville last year, and he will roll off sixth for tonight. Grant Enfinger and Matt DiBenedetto will make up row four in seventh and eighth, respectively.

After being the fastest in the practice session earlier on Friday, Stewart Friesen will start in ninth place.

Jack Wood completed the top 10 with his best start of the 2022 season.

Qualifying had one incident, as Tate Fogleman spun out and was unable to complete a lap in his qualifying effort.

Hutchens initially made the race. But after qualifying was finished, Hutchens and Max Gutierrez’s times were disallowed for being too low. As a result, Hutchens won’t make the race. Chase Janes will make the race, starting in the last row (35th). Gutierrez will start last (36th).

The Rackley Roofing 200 will take place on Friday, June 24 at 8 p.m. ET, with TV coverage provided by FOX Sports 1.