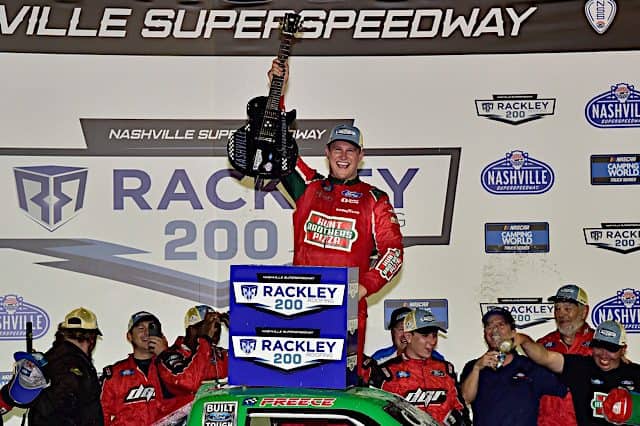 In a race that saw Ryan Preece and Zane Smith combine to lead 144 of the 150 laps, it was Preece who prevailed at Nashville Superspeedway for his second NASCAR Camping World Truck Series win on Friday (June 24).

Preece won the pole, led a race-high 74 laps and held off Smith and Carson Hocevar in the final laps to secure back-to-back wins at Nashville and the second straight win for David Gilliland Racing.

“I don’t ever like it to be that close, but my hats off to DGR and this Hunt Brothers Ford F-150,” Preece said. “Really happy Scott Hunt and the Hunt Brothers crew and all of them are here tonight for this one. And we got a second guitar, I might have to start a band!”

Smith finished second after leading 70 laps and was unable to get by Preece after mounting a late charge in the final three circuits. By virtue of his finish and 19 stage points, he will enter the race at Mid-Ohio Sports Car Course as the Truck Series points leader for the first time since the season opener at Daytona International Speedway.

“[Needed] clean air,” Smith said. “Just really, really tough to pass, and once we had that stop and lost 10 spots, I was worried. To fight back there and contend for a win says a lot about my Speedco Ford F-150 and my Front Row [Motorsports] team. Another fast Ford, just not quite enough.”

Ty Majeski finished fourth for his third straight top-five finish, and Stewart Friesen crossed the line in fifth for his fifth top five of the season.

Christian Eckes finished sixth and Tyler Ankrum came home seventh, tying his best finish of the season. Max Gutierrez, a 19-year-old from Mexico City who subbed for Austin Wayne Self, finished a career-best eighth in just his second career start.

Nemechek and Matt Crafton completed the top 10 in ninth and 10th, respectively.

In a race where track position was king, drivers fought tooth and nail on restarts to grab any positions that they could get. When the green flag flew to start the race, it was Zane Smith passing Preece to take the lead on lap 1.

Although Preece never left his sights, it was smooth sailing for Smith in clean air as he jumped to the lead on every successive restart and led the first 49 laps of the race en route to a stage one victory.

During the stage one caution, every driver elected to take four tires with the exception of Majeski; he entered stage two as the race leader. But that didn’t last for long, as Majeski began falling back as Smith made quick work of him on the restart.

In an unusual incident, Tanner Gray smacked the outside wall after cutting a tire on lap 61. However, there was no caution despite the violent hit. Gray drove away from the scene and finished 30th, seven laps down.

Smith continued to cruise out to a comfortable lead during this time, as he gapped Preece by more than a second. However, Smith’s lead evaporated on lap 69 after Nemechek was spun by Hocevar on the backstretch after a failed block attempt while running in the top 10. Both drivers pitted for repairs and were taken out of contention for points in stage two.

The caution gave Preece another chance to take the lead away from Smith on a restart, and he did just that on lap 74 after Smith was slow out of the gate. Preece took over the point, and for the first time under green, Smith found himself trailing the leader after leading 69 of the first 73 laps.

With Preece in control, he pulled a comfortable margin over Smith and won stage two by over a second.

In the final round of pit stops on lap 100, Smith suffered from a poor stop and dropped from second to ninth in the running order. Preece came out of pit lane in second after Parker Kligerman took two tires.

But just like Majeski before him, Kligerman immediately fell back in the running order on the older set of tires. Preece took over the lead once again, and a great launch allowed Smith to take it three-wide on the restart; he made his way up from ninth to fifth in the first four turns with 47 laps to go.

However, the field began to spread out after the restart, and Smith began losing ground to Preece. Eckes took over second and became Preece’s main competition, but he was no match for him as Preece once again began building up a two-second lead.

Preece retained the lead after another restart, and Smith made his way up to third behind Preece and Eckes with 25 laps to go.

But as the old saying goes, cautions breed cautions. The biggest accident of the race happened after a restart with 24 laps to go, as Majeski, Matt DiBenedetto, Corey Heim and Grant Enfinger went four-wide into turn three while battling for sixth. As one can imagine, four-wide did not work as Heim, Enfinger and DiBenedetto had a nasty crash into the outside wall, with Chandler Smith spinning through the grass to avoid Enfinger.

A big hit for Corey Heim, Grant Enfinger and Matt DiBenedetto at Nashville. They were all able to climb out. https://t.co/FbsD7UBOlx pic.twitter.com/mbjYQtl7Zy

The field gathered back up for another restart, but the field didn’t even reach turn 1 as Hailie Deegan crashed into the outside wall after a bump from Gutierrez. With that, the field was set up once again for an 11-lap shootout.

Preece got the early jump and looked to be cruising to the win. Meanwhile, behind him, Zane Smith and Hocevar both got around Eckes to take over second and third. With seven laps to go, Preece’s lead was up to a second over Smith. Smith slowly began clawing the gap away, as it was down to just eight-tenths of a second with five laps to go.

Things then got interesting in the final three laps, as Preece suddenly slowed up. The gap was now at a quarter of a second, as Smith and Hocevar suddenly found themselves right at Preece’s bumper with a race win and a guitar trophy on the line. But despite the duo’s best efforts, Preece held off all challenges and wound up victorious at Nashville for the second straight season.

THIS finish! @RyanPreece_ and the No. 17 team holds on to give @dgr_racing back-to-back wins! pic.twitter.com/wOYlcdQ5cy