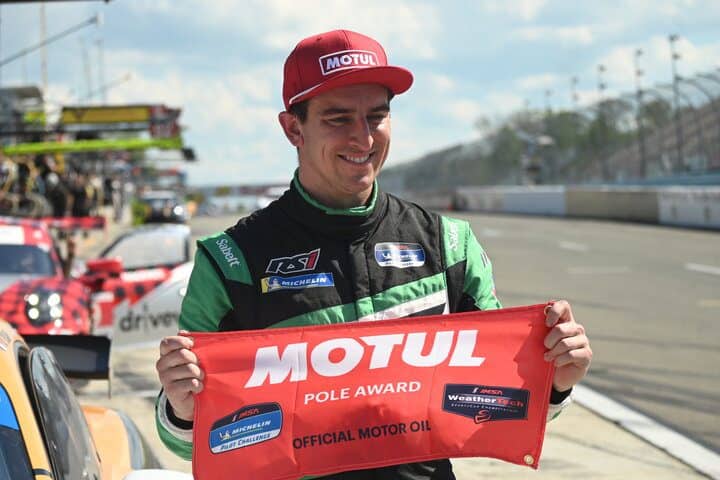 WATKINS GLEN, N.Y. – Rennsport One’s Eric Filguerias may have lost his chance at six wins in a row Sunday at VIR, but he put himself squarely in position Friday (June 24) to start another streak. With a lap at 106.900 mph, Filguerias will start from pole in Saturday’s IMSA Michelin Pilot Challenge Tioga Downs Casino Resort 120 at Watkins Glen International. That said, he thought he should have been faster.

“[My first lap] should have been my best lap, but [it wasn’t] due to a spacing thing,” Filguerias told Frontstretch afterwards in the garage. “That’s just something that I could have been a bit more cautious about.”

Filguerias was able to set his pole lap roughly five minutes into the 15-minute session. After his next lap was deleted due to a violation of track limits, Filguerias pulled in and let the rest of the class take their shots at them. They were unsuccessful.

Filguerias’ lap was .212 seconds faster than Riley Motorsports’ Alfredo Najri in his Toyota GR Supra GT4. Murillo Racing’s Kenny Murillo will start third, followed by Patrick Gallagher, who was a late addition to the Corsa Horizon team in the past couple of days. KohR Motorsports’ Luca Mars rounds out the top five in his Ford Mustang GT4.

Turner Motorsport’s Dillon Machavern, who was fastest in practice earlier, will start sixth in his BMW. Eric Foss starts seventh in the second Murillo Mercedes, then Bob Michaelian and FCP Euro with Ricca Autosport’s Trevor Andrusko. TeamTGM’s Hugh Plumb was 10th. The top 10 drivers were all within a second of Filguerias’ pole speed.

In TCR, JDC-Miller MotorSports’ Chris Miller was fastest early on in his Audi, but Bryan Herta Autosport’s Mason Filippi was able to set a lap at 104.656 mph with a little more than five minutes remaining. That lap held up to give Filippi his second personal pole of the season and the third overall for the No. 77 team (teammate Tyler Maxson won the pole back at Daytona in January).

This weekend is also the first weekend that Filippi and Maxson are back in a Hyundai Elantra N TCR. The duo had to race a Hyundai Veloster N TCR at Laguna Seca and Mid-Ohio after their previous Elantra was written off in a crash at Sebring. It is a fairly noticeable change for Filippi to go from the Veloster to the Elantra and back again.

“The Veloster has a shorter wheelbase, so it’s definitely more on edge,” Filippi told Frontstretch. “Tyler and I do like a car that is on edge, so we set up [the Elantra] to be as close to the Veloster as we can, but it has a little bit stability in the high speed corners.”

Filippi’s pole lap was not guaranteed until the last car completed their final lap. Robert Wickens had the fastest times in the first two sectors of his final qualifying lap, but ran into traffic late in the lap and slowed up.

Filippi’s lap ended up being .067 seconds faster than Miller. Wickens had to settle for third, while teammate Parker Chase was fourth. A very confident Victor Gonzalez Jr. was fifth fastest.

There were no red flags during the qualifying sessions. However, Rory van der Steur got himself into trouble and ended the session with the rear bumper hanging loose on his Veloster.