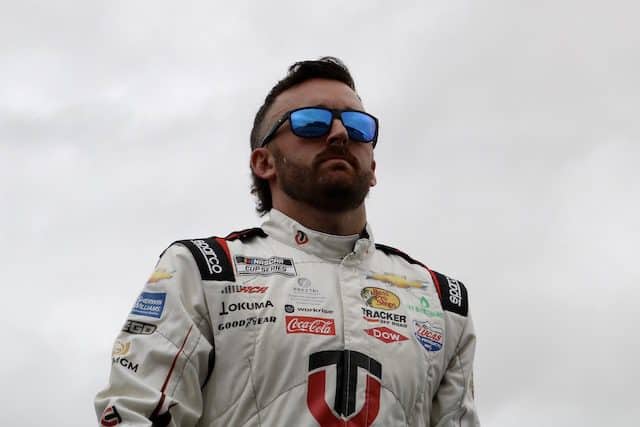 It’s time for a trip to Music City for NASCAR Cup Series drivers as they look to win a guitar at Nashville Superspeedway. Let’s get your daily fantasy NASCAR DraftKings lineups set for the Ally 400, airing on Sunday, June 26 at 5 p.m. ET on NBC.

The Cup Series visits the Tennessee racetrack for just the second time in its history, and first for the Next Gen cars. Nashville is a 1.33-mile concrete D-shaped oval, slightly smaller than the 1.5-mile Kansas Speedway and differently shaped from 1.36-mile Darlington Raceway. It has tighter corners than Kansas, so cars often enter them like a short track.

With its uniqueness, what data can you use to help set your DraftKings rosters? You could look at Dover Motor Speedway from this year, as it is a concrete oval, too. But the best information you have will be related directly to what happened here in 2021 along with Friday’s practice results.

As always, check out Saturday’s qualifying results (airing at 1 p.m. ET on USA Network) to see where drivers line up.

Before I share some drivers I’m considering for Nashville, here’s a look back at the results from Sonoma Raceway:

The Toyotas struggled at this road course, as Kyle Busch couldn’t stay up front and ended up spinning later in the race. Austin Cindric had a good day, advancing 20 positions to fifth place but it wasn’t enough to save my roster.

DraftKings Picks for 2022 Ally 400 at Nashville

Busch didn’t have a top 10 last season, but he started this weekend off right in practice. He posted the best five-lap average time and was third-best in 10 consecutive laps, so you know he’s going to be fast in Nashville qualifying. Will Busch maintain that speed on Sunday?

Maybe. As I noted last week, the No. 18 Joe Gibbs Racing pilot had the best average DraftKings score on oval racetracks over 1 mile long over the first half of the season. Busch earned top fives at both Kansas and World Wide Technology Raceway. Plus, he led some laps and recorded several fastest laps in these races.

Besides all that, Busch won at Nashville four times in the NASCAR Xfinity and Camping World Truck series (two apiece), including last year’s NXS race. Hopefully, he’ll dominate like he did at Las Vegas Motor Speedway earlier this year, or at least post some fastest laps.

Kyle Larson dominated last year’s race at Nashville, but who was the runner-up? That’s right, Ross Chastain. He began 19th, so he earned 17 bonus DraftKings points for each position he gained on the track. He also scored fantasy points for 18 fastest laps when very few earned 10 or more.

And this year, Chastain has the best average DraftKings score over the first 16 races: 48.21875. The driver of Trackhouse Racing Team’s No. 1 has been No. 1 twice, at Circuit of the Americas and Talladega Superspeedway. More recently, he led 153 circuits in the Coca-Cola 600, though he ultimately finished 15th. Chastain has three top 10s in the last four races and should continue to run up front this weekend.

While Chastain and Busch have both run up front consistently, that hasn’t quite been the case for Erik Jones, who drives for Petty GMS Motorsports. He has just one top five and five top 10s in the No. 43 and has crashed out three times this year. His worst finish was Kansas, a 32nd after he began 22nd.

But the Michigan native has some promising showings, most recently at Gateway, where he gained 14 spots to seventh place. The week before that, he advanced to 14th after starting 25th, which helps in daily fantasy. Lastly, at Dover, Jones began 25th and made his way into the top 10 at a fellow concrete track.

If Jones stays out of trouble on Sunday, expect a similar run as the underdog fights to stay on the playoff bubble.

In last season’s Ally 400, Ricky Stenhouse Jr. claimed a sixth-place result after starting 14th — a great performance for the JTG Daugherty Racing driver. Though he’s finished mostly 21st or worse this year, he did claim 10th place at Auto Club Speedway, another intermediate track. Stenhouse also earned four straight top 10s at Dover, Darlington, Kansas and Charlotte Motor Speedway. One of those was a runner-up, at the Monster Mile.

Stenhouse is also entering this weekend on a high note, as his team announced Friday that he will remain with JTG on a multi-year deal. What better way to cap off the news than to earn another top 10 in Music City? If you think he can do that, lock him in your lineup.

Austin Dillon has had an up-and-down season, with six results of 21st or worse. But that hasn’t stopped the fight in the No. 3 Richard Childress Racing team. In the last five events, Dillon has four results of 15th or better to get his team back on track. All four were further from where he started, including a ninth at the Track Too Tough to Tame and a 15th at Gateway.

Dillon performed similarly at Nashville last year, starting 28th and ending in 12th place. These kinds of runs are what help drivers score well on DraftKings, as each spot gained is one fantasy point. He definitely should be on your fantasy radar this weekend.

AJ Allmendinger didn’t race in the Cup Series at Nashville, but he did score a fifth-place there in Xfinity. Now, this year he hasn’t really performed as well as he has in NXS, but he did bring home a 10th-place effort after qualifying 35th at Gateway.

Plus, Allmendinger was quick in the Xfinity practice on Friday, posting the second-quickest single-lap time. The Kaulig Racing driver also ran the best average among those who went 10 consecutive laps in that session.

Not happy with the ‘Dinger in Cup? If you’d like, you can play Bubba Wallace instead, as he was quickest in the Cup Series’ single-lap and 10-lap average in practice.