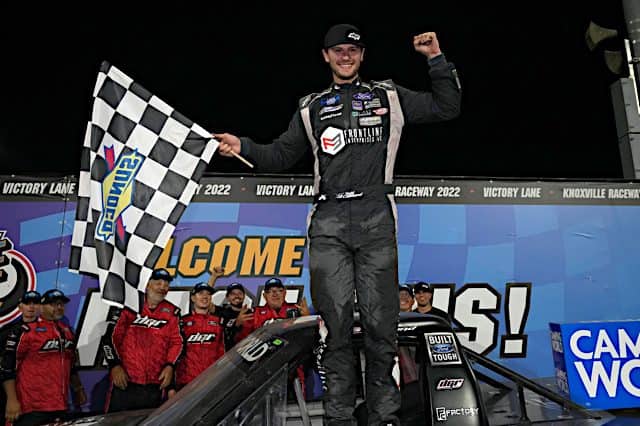 It will be a happy Father’s Day for team owner David Gilliland, as his team (David Gilliland Racing) won Saturday night’s (June 18) NASCAR Camping World Truck Series race at Knoxville Speedway with his son Todd Gilliland at the helm.

“I told [Todd] that all I wanted for Father’s Day was that trophy, and we’ll be taking it home on the plane with us.” David Gilliland told FOX Sports 1 after the race.

Now a Cup Series rookie, Todd Gilliland led 58 of the final 85 laps and held off John Hunter Nemechek in a four-lap shootout to score his third Truck Series victory in the one-off race; the win also marked the first start for his father’s team.

“This will make tomorrow a lot more fun,” Todd Gilliland said. “Just so amazing, man. Being in the Cup Series is tough, racing every single week. I had a million people ask me, ‘Is this what you really want to do on your off weekend?’ Absolutely. Nothing beats racing.”

There always seems to be at least one bizarre moment in every race. And that moment came early in stage one, as the roof camera on Stewart Friesen’s No. 52 truck shattered into a hundred pieces after it was struck by a piece of debris.

Tires, fuel and adjustments weren’t the only services that the trucks received during the stage one red flag. FOX’s technical team visited Friesen’s truck and fitted it with and brand-new roof camera in time for the beginning of stage two.

Thank you for your service, unidentified camera. Your sacrifice will not be forgotten.

Derek Kraus won the pole, but Carson Hocevar made quick work of him in the first two turns. Hocevar faced an early challenge for the lead from Ben Rhodes, but he held him off and the cruised to the stage one victory, leading all 40 laps in the process.

Rhodes ran in the top five for the first 30 laps, but he was forced to pit under caution in the middle of the stage after the truck overheated from a buildup of mud on the damaged grille. The repairs put him a lap down, and he would not get back on the lead lap until 33 laps to go.

Friesen began the race with his best performance on dirt since his first career win at Eldora Speedway in 2019. After running top five for the first 38 laps, Friesen started alongside Hocevar on the front row for a shootout to decide stage one. But heading into turn 3 on the final lap of the stage, Friesen had a flat right rear tire, missed the turn and lost all of his track position.

Friesen missed scoring stage points as result of the flat tire, but he was back inside the top 10 by the conclusion of stage two.

To say that it was an eventful night for the Friesen’s would be an understatement. In the middle of stage two, Jessica Friesen appeared to spin and come to rest on top of the apron curbing. Instead, her No. 62 truck had completely flipped over, a flip that was completely missed by FOX’s cameras and not even mentioned on the broadcast.

Filmed by @JTDesigns57, here is the footage of Jessica Friesen’s flip at @knoxvilleraces (around 22 sec mark). pic.twitter.com/TJyJ9dakqg

Amazingly, Friesen was able to continue driving after the crash. However, she later retired from the race after completing 76 laps; she finished 34th.

Hocevar has been oh-so-close to his first win on several occasions in his Truck Series tenure. Last season, he finished second while hounding Nemechek for the lead in the closing laps at Charlotte Motor Speedway. At the Bristol Motor Speedway dirt track this spring, he took over the final stage of the race before being passed for the win by Rhodes with four laps to go. At Darlington Raceway, he finished second behind Nemechek once again in overtime. And the most heartbreaking of all was at Charlotte in May, where he led by five seconds until a late caution forced an overtime finish that saw him crash with Ryan Preece while battling for the lead.

But through all the heartbreak, Hocevar has been determined to score his first win, a broken ankle be damned. He won his heat race, started second, dominated stage one, and then led the first 65 laps of the race without a serious challenge.

But his bad luck continued, as the bid for his first Truck Series win ended prematurely on lap 67. After the restart for Jessica Friesen’s crash, Hocevar was unable to get the big restart jump that he had gotten throughout the evening. Todd Gilliland passed him for the lead on lap 66, and Hocevar immediately began slowing down before the field even reached the first turn of lap 67.

While it first looked like Hocevar had a flat tire, the severity situation soon became clear: Hocevar’s truck suffered a terminal engine failure.

The 65 laps Hocevar led tonight represented the most he had led in a single race; he had checked out from the rest of the field until the moment the engine let go. But the end result was the same, Hocevar was denied once again. The bid for his first win in his 44th start ended not in a cloud of smoke, but rather a silent whimper.

“She done blew up,” Hocevar said. “I mean, I thought Sonoma [Raceway] was going to be the hardest one to watch and now this one’s going to be hard to watch. I’ll probably just sit and think about it for a while.”

“It just sucks, it’s one of the areas we can’t control, we can’t do anything. These guys did all they could, they built me a badass fast race truck.”

The end of stage two brought about split pit strategy. Brett Moffitt, Grant Enfinger and Buddy Kofoid were the biggest names to not take tires, and they inherited the lead for the restart of the final stage. With Enfinger and Kofoid spinning the tires, Moffitt got off to a great restart and a 1.7-second lead after two laps.

However, Moffitt’s huge lead was short-lived. NASCAR deemed that he jumped the restart, and he was forced to pull off track and surrender the lead.

The call seemed questionable, as it appeared that Moffitt restarted within the restart zone as the control car and only appeared to jump because of the poor restarts that the surrounding trucks had. But regardless of whether or not it was just justified, the penalty took Moffitt out of winning contention.

His troubles only continued from there, as he retired from the race after a crash with Tanner Gray on lap 125.

Brett Moffitt has been black flagged for jumping the restart. pic.twitter.com/CdLoyYNO2M

Gilliland inherited the lead after Hocevar’s engine failure, and he cruised to the stage two win in the remaining 25 laps. Gilliland lost the lead after drivers elected to not take tires on lap 90, but he was back to the lead once again on lap 102.

Gilliland later received a challenge for the lead from Nemechek, and Nemechek captured the lead on lap 123. However, Nemechek’s time in front was short-lived, and Gilliland began making up ground on the high line in the restart following Moffitt’s crash. Gilliland took the lead back for good on lap 140, and he successfully held off Nemechek for the win in a four-lap shootout.

Ben Rhodes entered the race with the regular season points lead, but not without three other drivers breathing down his neck. Rhodes, Chandler Smith, Zane Smith and Nemechek were separated by just 14 points before the green flag flew in Knoxville.

And boy was there a points shakeup by the time the checkered flag flew. Although he managed to finish 10th, Rhodes’ overheating problems left him with zero stage points; the lackluster 27-point total means that he leaves Knoxville third in points after entering as the leader.

The big rookie standout of the race was Buddy Kofoid, as he started fifth in the main event after finishing second in his heat. He fell behind early, but the No. 51 team elected to stay out after the stage two break. On older tires for the final 60 laps, Kofoid managed to hold on to 11th place. Westbrook also deserves a shoutout, as he kept his truck clean and finished a solid 17th in his series debut.

The Truck Series returns next Saturday night for a clash at Nashville Superspeedway, the second since its return to the schedule in 2021. The Rackley Roofing 200 will take place on Saturday, June 24 at 8 p.m. ET, with TV coverage provided by FOX Sports 1.