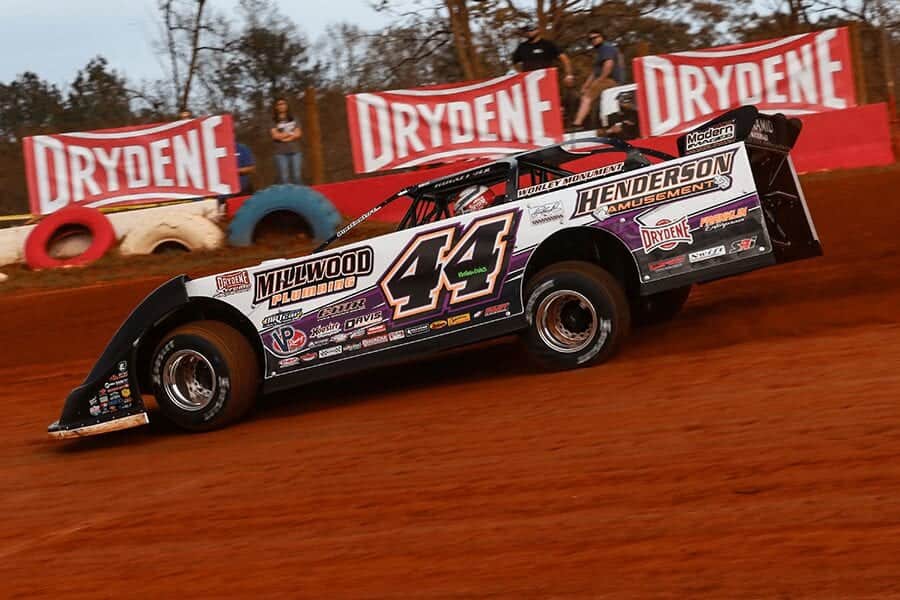 In the latest battle of what’s looking to be a season-long war, Chris Madden held off Jonathan Davenport to win the Mountain Moonshine Classic at Smoky Mountain, the biggest late model race since the Eldora Million.

Chris Madden ultimately dominated Saturday’s Mountain Moonshine Classic feature, leading all 60 laps of a $50,000-to-win feature that was the richest in the long history of Smoky Mountain Speedway.

He’s out of the car 𝟓𝟎𝐤 richer!

But that boxscore won’t show just how close Madden came to giving this one away. With Davenport and Brandon Overton both closing on his No. 44 car in the closing laps, Madden got out of shape trying to lap Tyler Erb and slapped the turn 4 wall coming to the white flag, allowing Davenport to close within a car length of the lead before Madden would pull away for good.

Madden was the dominant drier of the weekend across both nights of competition, winning heat races Friday and Saturday as well as his preliminary feature Friday night. Tennessee-native Jimmy Owens scored the second preliminary feature.

It’s mid-June and already Chris Madden, last year’s World of Outlaws late model runner-up, is having what commentator James Essex billed a career-year with nearly half a million in winnings. The wins speak for themselves, but credit also needs to be given to Madden for how he’s been handling victory lane in 2022; across both the XR Super Series and the Lucas Oil tour, Madden has been consistent in praising track promoters responsible for the year’s record-setting paydays.

Credit goes to both Madden and Jimmy Owens for keeping Jonathan Davenport to runner-up finishes considering the hot streak “Superman” was on after winning the Historic 100 at West Virginia Motor Speedway and the Eldora Million.

Brandon Overton’s third-place finish was as good as he’s run in recent memory, but the success story to call out here is the save he made during his preliminary feature on Friday, managing to land his late model in turn 1 and keep going after he got it up on two wheels during the race.

No question, the breakout start of the weekend was a Ferguson, and his first name wasn’t Chris. “Fergy-time,” who had his breakout moment last month in winning the Show-Me 100, actually missed this weekend’s Mountain Moonshine Classic thanks to hauler trouble. His cousin Carson Ferguson, a rookie in super late models, did not though, and delivered a masterful performance that saw him give both Owens and Davenport everything they could handle in Friday’s second prelim feature, then back that up with a solid eighth-place finish Saturday.

This kid is on the rise! @carsonferguson was puttin’ some moves on them tonight.

Great @lucasdirt podium against some of the best in the biz. pic.twitter.com/kp1aYiDjOe

Current LOLMDS Rookie of the Year leader Ashton Winger endured two tough nights at Smoky Mountain, breaking down on track during his preliminary feature Friday despite charging from 17th to seventh and following that up with having to use an emergency provisional to start Saturday’s Mountain Moonshine Classic feature. Winger finished 24th.

Fellow ROTY contender Daulton Wilson was also forced to take an emergency provisional Saturday after losing the final transfer spot of the second B-main to Trent Ivey on the last lap, finishing 25th.

Wilson was unfortunately in the eye of the weekend’s biggest storm, occurring during Friday’s final heat race. Getting out of shape in turn 2, Garrett Alberson turned Wilson into oncoming traffic, triggering a four-car wreck that collected Jensen Ford and sent 411 Motor Speedway regular Cory Hedgecock upside down. Hedgecock, who has been a true super late model ringer in Tennessee this year, was never able to recover and missed Saturday’s feature.

Tennessee legend and all-time LOLMDS winner Scott Bloomquist was all but invisible in the series’ return to his home state, arriving late on Friday and failing to complete time trials after missing hot laps. A quiet showing across prelim action ended up with Bloomquist finishing a distant 14th.

There’s no doubt in my mind that if a track is going to insist on running a multi-day race event, that the race format should do exactly what the Mountain Moonshine Classic did and run preliminary features. Especially in super late model racing, where the gap between the national teams and the regional ringers continues to grow as weekly super late model racing becomes a thing of the past, to see Friday night play out where all drivers that showed up got to race in a feature and make some money was very welcome. And the features were racy to boot.

Unfortunately, it doesn’t seem that the prelim features were much of a draw. Saturday night saw a large crowd, but Friday was probably the emptiest I’ve seen Smoky Mountain Speedway since I started covering dirt for Frontstretch.

One more format note. Thank you to the Lucas Oil tour for keeping things simple. One random draw before even hot laps start sets the heat races, with the winners of heats 1-4 starting 1-4. No redraw ceremonies, inverts or passing points to worry about. Perhaps that’s part of why Friday’s racing program moved at a decent clip; had it not been for an extended red flag after the Wilson/Hedgecock incident in the fourth heat race may have timed in right around the three-hour mark.

Sadly, that wasn’t to be Saturday, with extensive track rework pausing the racing action between the support classes and the Mountain Moonshine Classic feature, as well as MAVTV commercial breaks extending the pace laps once the cars got on the track. It does make me wonder why such rework was needed for a 60-lap feature Saturday given that the two 30-lap features Friday had no such issues.

@lucasdirt @smokymtnspeed $40 to watch a fuc$!ng tractor tear up a perfect track???🤬 Should be driving the 3 hours back home already!?? pic.twitter.com/AqZWGDd0ux

For all the challenges that MAVTV have (rightly) been criticized for, credit where it’s due, they went 1 for 1 capturing on-track flips on camera. They can’t seem to operate a mobile app reliably but they easily upstaged a national TV network in terms of broadcast quality.

$1,000 – pay for starting on an emergency provisional in Saturday’s Mountain Moonshine Classic; also the pay Richard Petty took home for winning the last NASCAR Cup Series race at Smoky Mountain in the 1970s.

Up Next: Thinkin’ Dirty stays on tour with the LOLMDS, as the tour heads to Lernerville Speedway in Pennsylvania for the $50,000-to-win Firecracker 100 Saturday night. Coverage can be found on MAVTV Plus.