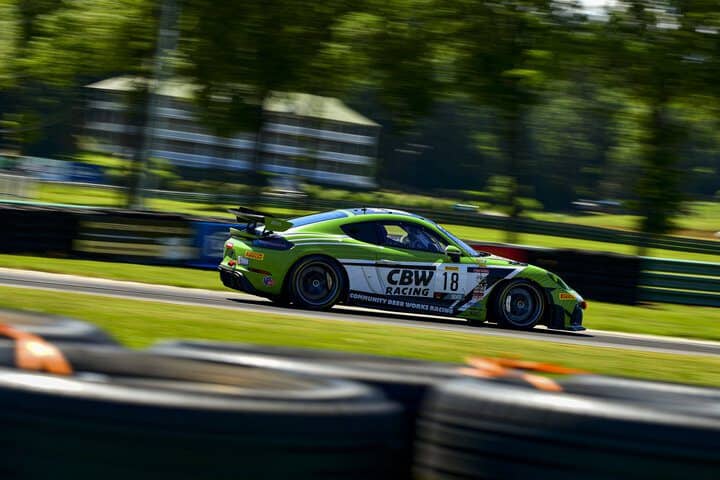 The winning streak for Rennsport One’s Eric Filguerias and Stevan McAleer continued Saturday (June 18) at VIRginia International Raceway.  The duo led the vast majority of the 60-minute race and claimed victory in Pirelli GT4 America SprintX Race No. 1 after a late crash caused the event to end under yellow.  It is the fifth win of the season in as many races in Pirelli GT4 America SprintX and the sixth win of the year for the duo.

“It’s been pretty fantastic,” McAleer said after the race.  “[Rennsport One] gave us an excellent car.  I was able to get away on the last restart and hold on.”

McAleer also stated that the Porsche had been given an extra 15 pounds of weight after qualifying due to a Balance of Performance ruling.

Filguerias started from the pole and was able to outdistance the Mercedes of Gavin Sanders into turn 1.  In the opening couple of turns, Capstone Motorsports’ Kris Wilson was able to get up to second.

Unfortunately, this was another race where it was hard to get much green-flag action.  On the first lap, NOLAsport’s Scott Noble spun in turn 3 and buried himself in the tire barrier to the point where tires ended up on the roof of his Porsche.  That brought out a safety car period that later evolved to a red flag for barrier repairs.

Under yellow, but prior to the red flag, the Random Vandals Racing BMW M4 for Paul Sparta stalled on track with a mechanical issue.  Both Noble and Sparta were done for the day.

Following a brief interruption, the green came back out with 40 minutes to go.  Filguerias was able to pull out a small gap while Wilson and Sanders battled for second.

Right as the pit window opened up, Fast Track Racing’s Tim Horrell stalled right before the Climbing Esses.  This put the officials in a tough spot since Horrell’s BMW was in a dangerous position, but they didn’t want to completely ruin the race by bringing out the safety car.  Ultimately, they chose to keep Horrell’s car there under a local yellow until all of the stops were complete.  Once Wilson stopped from the lead to hand over to Cole Ciraulo, the yellow came out.

The green came back out with 22 minutes to go.  McAleer got a big jump on the rest of the field.  Meanwhile, there was a four-way scrum for second between Ciraulo, Michai Stephens, John Capestro-Dubets and John Geesbreght that was won by Ciraulo.  Further back, contact between GMG Racing’s Andrew Davis and RENNtech Motorsports’ Guy Cosmo resulted in a broken left rear suspension on Davis’ Aston Martin, ending his day.

The race ultimately ended under yellow after Dexter Racing’s Dominic Starkweather spun and hit the tires hard in the Snake with 17 minutes to go.  This required repairs to the barriers that resulted in the race ending under yellow.  McAleer ended up taking the win under yellow in a race where approximately 20 of the 60 minutes were run under green.

The top four finishers were all in the Silver class.  Sanders and Stephens ended up second, followed by Wilson and Ciraulo.  SMOOGE Racing’s Geesbreght and Kevin Conway were fourth in their Toyota, while AutoTechnic Racing’s Zac Anderson and Austen Smith were fifth.

In Pro-Am, Capestro-Dubets was the class of the field, being the only driver to wedge himself into the Silver scrum.  While he ultimately dropped back to fifth overall prior to Starkweather’s crash, that was more than enough to get the class victory for himself and Tom Capizzi.

ARG/Rotek Racing’s Ford Mustang GT4 for Mike Skeen and Edgar Lau were second, followed by the Porsche of Premier Racing’s Adam Adelson and Elliott Skeer.  The Heart of Racing’s Ian James and Gray Newell were fourth in their Aston Martin, while Hattori Motorsports’ Seth Lucas and Matt Plumb were fifth.

The Am class was won by BimmerWorld Racing’s James Clay and Charlie Postins in 11th overall.  NOLAsport’s Alain Stad and Seth Thomas were second in their Porsche, then Rennsport One’s Nelson Calle and Juan Martinez.  NOLAsport’s Sean Gibbons and Sam Owen finished fourth, while The Racers Group’s Jason Alexandridis and Derek DeBoer rounded out the top five.