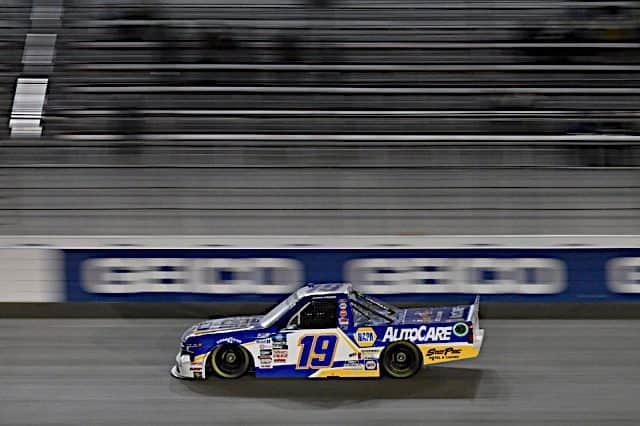 Derek Kraus is on the pole for the NASCAR Camping World Truck Series race at Knoxville Raceway.

The McAnally-Hilgemann Racing driver earned his third career pole and second straight at this track after he scored 15 passing points in his qualifying heat.

Carson Hocevar will line up alongside Kraus on the front row after winning the second qualifying race. Ben Rhodes, Stewart Friesen and Buddy Kofoid round out the top five after earning 12 passing points in their heats.

In the second 15-lap race, Hocevar came out on top, but not before he got turned by Chandler Smith. Hocevar got some damage to his splitter, while Smith also got some right-front damage as a result of their contact.

Deegan won qualifying race No. 3. Kofoid and Rhodes earned the most passing points with 12 each.

Gilliland dominated the third heat in his return to the Truck Series, while Friesen claimed 12 passing points thanks to a last-lap pass on Tanner Gray.

Braden Mitchell and Norm Benning did not qualify for the main event.