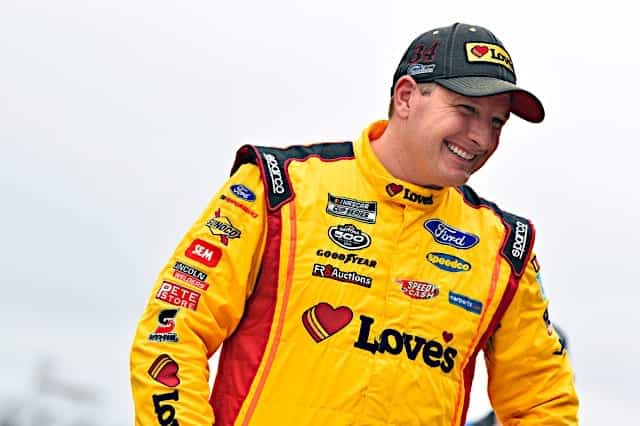 If you look down the list of Sonoma winners, most of them in the past decade have been expected victors. Kyle Larson, Martin Truex Jr., Kevin Harvick, Kyle Busch and several other perennial contenders have graced the victory lane of Sonoma Raceway.

That was not the theme of this year’s Toyota Save Mart 350 at Sonoma (June 12). A former underdog (Daniel Suarez) collected his first career win, a Roush driver arguably had his best race (Chris Buescher) and one of the sport’s veteran underdogs rounded out the podium in Michael McDowell.

The importance of track position emphasized the value of having a clean weekend overall. McDowell started it off in the right direction by qualifying on row two in the fourth position; but he did not stop there.

The No. 34 Love’s Travel Stops Ford came within striking distance of the lead and potentially the win at several moments of the 90-lap event. McDowell and crew chief Blake Harris’s main concern was their race trim. The short run was effective, but the pace of a long run had the team skeptical.

Instead, McDowell’s strong spring and summer continued with a top-five finish. Harris opted to pit McDowell before the conclusion of both stages in order to better their chance at victory in the long run. While McDowell only earned two stage points, the strategy nearly played off in a big way.

Several teams and owners were likely grabbing their calculators and checking their calendars for the rest of the regular season due to playoff implications at the top of the board. For the majority of the final stage it was the following running order: Suarez, Buescher, Harvick, McDowell and Brad Keselowski. See the theme there? All five of those drivers were outside of the cut line entering Sonoma. Add in Ryan Blaney, who is still searching for his first win of 2022, and the playoff picture was beginning to get murky.

McDowell piloted his Ford in the fourth position up until his final pit stop. During green-flag stops, a caution flew as the 37-year-old was scored in ninth. However, several leaders had to pit and McDowell restarted from the fourth position. It would not be enough to run Suarez or Buescher down, but McDowell improved by one spot to earn an impressive third-place run.

Michael McDowell was proud of that third-place finish but obviously was hopeful going into the final restart that he could challenge for the win — or Daniel Suarez and Chris Buescher would tangle to leave the door open for him. pic.twitter.com/CwPZmpB7Sm

Considered one of the road-course aces in the field, the Next Gen car and improved performance from Front Row Motorsports had made McDowell a legitimate contender to earn a win at the track type. With four more to go this season, including three in the regular season, there is a looming possibility McDowell could be in the playoffs back-to-back seasons.

The Phoenix, Ariz. native marked several milestones today. The third-place easily surpassed his previous career-best Sonoma finish of 14th in his previous nine attempts. It was also his first top five on a non-superspeedway. Additionally, McDowell has now recorded a career high for top 10s in a season, earning his sixth such result in only 16 races.

Sitting nearly 100 points back of Aric Almriola for the final playoff spot currently, McDowell will almost certainly need a win before the postseason begins. However, that is definitely not impossible. Oh, and McDowell’s current points position of 20th puts him ahead of Denny Hamlin in the standings, though Hamlin’s two wins lock him in the playoffs.

It is a vast improvement from a team with a rookie crew chief who struggled to find their footing at the beginning of the season.

Tony Stewart was the guest commentator in FOX Sports’s last race of the 2022 season. Stewart made the note of how much he has enjoyed watching Justin Haley improve this season, plus how much potential he has in his pocket. The three-time Cup champion observed how Haley’s mistakes are usually a result of inexperience and not overdriving the car. That proved key in a race where several drivers overdrove their machines.

Haley brought home an impressive 12th-place result. He is not a rookie due to the number of starts he had made in previous seasons, but in his first full-time season with a team in their first full-time season, it should be marked a success thus far. Haley is no stranger to road-course success. He won a NASCAR Camping World Series truck race at Canadian Tire Motorsports Park in 2018. But being in a new car, situation and only second appearance at Sonoma is a different animal.

What was impressive about his run was his ability to drive through the field, something that even the best cars struggled with. Haley’s team went with the strategy to stay out at the end of the stages, putting him deep in traffic for the next stage due to pitting under caution. The driver of the No. 31 LeafFilter Chevrolet also pitted during the final caution with 27 laps remaining, putting him in 30th. In just over 20 laps, the 23-year-old gained 18 positions to finish 12th. That potential is continuing to grow week after week, as Haley earned his eighth top 15 of the year.

Another bragging right for Haley was that he outran his road course-savvy teammate AJ Allmendinger. To be fair, however, Allmendinger faced circumstances that no one wants at a track like Sonoma. Early in the race, the Los Gatos, Calif. native reported he had no power steering. Despite several attempts to improve it, Allmendinger was forced to drive the 12-turn course with little to no steering. That proved both the mental and physical aspect that these drivers face each week in unprecedented situations. However, like he has proven so many times in his career recently, Allmendinger was resilient. He outlasted the 90-lap event to earn a 19th-place result. It may not look pretty on paper, but it should be a notable achievement for what Allmendinger faced.

Rounding out the top 20 was another road-course master in Joey Hand. Hand made his third career Cup start with Rick Ware Racing in the No. 15 Built Ford Proud Ford. Hand’s road-course prowess has drawn other Cup drivers seeking advice on road racing. His experience spans across IMSA, Grand-Am, ALMS and several other racing disciplines. That experience proved valuable at Sonoma, as Hand earned his best career-finish at the Cup level. While it was not a highlight-worthy moment, stage one winner and polesitter Larson spent the second stage fighting his way through the field after pitting during the stage one break. One of Larson’s toughest outs was Hand, who held Larson off for the 15th position for an extended time. Hand ran in the top 20 nearly all race and proved how much of a road ace he is.

Michael McDowell (third): “You know, we just fired off a little on the slow side but we were really good on the long run. We started to reel the leaders in there the last five laps but it just took a little too long to get going. I am proud of the entire team. This was a really solid weekend for our Love’s Travel Stops Ford Mustang. You have to run second, third, fourth and fifth consistently to put yourself in a position to win a race and we were close today. We just needed a little more on the front end to challenge. I am really proud of everybody’s effort. We are getting closer. We are doing it week in and week out so I am really proud of everybody.”

Justin Haley (12th): “Overall, it was a good day for us. We fought a loose car for most of the race, but we had some good adjustments and strategy on pit road. We kept track position for most of the day and ultimately ended up with a decent finish. It’s another solid race for us to build on. I’m looking forward to the off weekend and then keeping the momentum going at Nashville.”

AJ Allmendinger (19th): “Tough day for us at Sonoma. I haven’t had the best luck at this track despite how much I love racing there. We started in the rear and had some power steering issues off the bat that we battled the whole day. It made for a difficult day, but we fought back into the top 10 until the very end when unfortunately I spun out. We showed speed but have some things to work on to be better for next time.”

The scheme is not a new sight on the track. Almirola ran a nearly identical scheme a week ago at World Wide Technology Raceway. But as a guy who grew up in a Ford loyal family, this scheme carried the luster of the blue oval all over it. My grandfather has always been a big Ford fan, and anything that brings an old-school look with the logo is special to me. Hand’s No. 15 Built Ford Proud Ford Mustang carried the royal blue colors proudly, resulting in a top-20 finish.

16 races in, the top dog each week may not be as crazy as the winner’s count across the series, but there have been a mixed bag of results this season. Let’s take a look.

Ross Chastain (no longer on the underdog list): Las Vegas-Circuit of the Americas, Martinsville, Talladega

Daniel Suarez (no longer on the underdog list): Richmond

The Cup tour takes a brief pause in the action with an off-weekend before returning to the Music City for the second Cup race at Nashville Superspeedway.