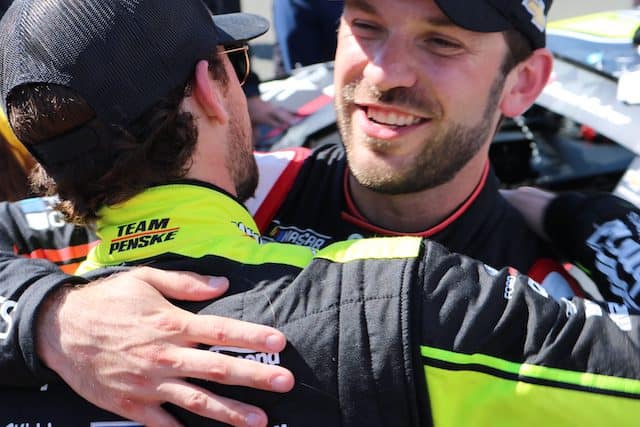 After 195 races, five and a half seasons, and starts with four different teams, Daniel Suarez is finally a winner in the NASCAR Cup Series. Suarez outran everyone at Sonoma Raceway on Sunday, avoiding mistakes that derailed a few drivers and teams who have more trips to victory lane. Although he was fast all afternoon, Suarez really took control in the second half of the race, holding back a charge from the equally hungry Chris Buescher lap after lap. Even during the last 10 laps, when Buescher and several other contenders started to fade, the No. 99 simply drove off into the California sun. Suarez’s win may be considered a surprise, but it was certainly no fluke.

Instrumental in Suarez’s win is his pairing with Trackhouse Racing Team. Justin Marks, the principal team owner, established Trackhouse prior to the start of the 2021 season and selected Suarez as the team’s driver. The organization went through some expected growing pains last year, but the No. 99 was surprisingly fast at times. Then, Trackhouse got a major upgrade by purchasing Chip Ganassi Racing’s NASCAR team, expanding to a two-car operation along the way. The second team, with driver Ross Chastain, has been the breakout story of 2022. But on Sunday, it was Suarez’s turn to shine.

After climbing out of his car, a joyful Suarez was clearly grateful for the opportunity to be racing with Trackhouse.

“These guys believe in me,” Suarez said. “Trackhouse Racing, Justin Marks, Ty Norris, everyone that helped me to get to this point… they never gave up on me. A lot of people did, but they didn’t. So, just very happy that we’re able to make it work.”

It feels like Suarez has finally found a home in the Cup Series with Trackhouse. That’s a big deal, because the stability offered by a supportive team was the one thing that Suarez always seemed to lack at NASCAR’s highest level. He has raced with competitive, well-established teams in the Cup Series before, but was rarely afforded an opportunity to grow and gain experience with the same group for more than a year. As a result, Suarez usually wound up being the odd man out whenever those teams needed to make changes.

Even his arrival in the Cup Series was unexpectedly abrupt. As a development driver with Joe Gibbs Racing, Suarez won the Xfinity Series championship in 2016. The original plan was to have him race in Xfinity for at least another year. However, Carl Edwards’s shocking retirement from NASCAR opened up a seat on JGR’s Cup team that Suarez would fill. Logistically, it made sense to move Suarez up since he and Edwards already shared a primary sponsor. JGR had also designated Erik Jones, its only other developmental driver ready for the Cup Series, to compete at Furniture Row Racing in 2017. Whether Suarez was ready or not, he was going Cup racing.

Perhaps JGR really didn’t have a better option after Edwards left, but Suarez wasn’t ready. The No. 19 team ran behind the other Gibbs cars most weeks and Suarez was never able to make the playoffs. He came close to winning a few times, but Suarez struggled to find consistent speed during his time with JGR.

But the biggest problem was the impending closure of FRR at the end of the 2018 season. Needing a place for Martin Truex Jr., JGR chose to let Suarez go. It was unfortunate for Suarez that he was once again the victim of bad timing. Yet even if he had been able to stay with Gibbs long term, it seems hard to believe that he would have broken out into a star on a team where Kyle Busch and Denny Hamlin were clearly the top priorities.

Suarez’s next stop at Stewart-Haas Racing was over almost as quickly as it began. Signed to the No. 41 car for 2019, Suarez got off to his best start ever and was 13th in overall points halfway through the regular season. Then, the No. 41 team hit a slump at the worst possible time. Thanks to a few bad finishes and a furious charge by Ryan Newman, Suarez missed the playoffs again, this time by just four points. With no wins or playoff appearances and Cole Custer waiting in the wings, Suarez was let go again.

In 2020, Suarez drove for Gaunt Brothers Racing, a team that lacked significant funding and had never attempted a full Cup Series season before. Struggling through a rough season with his future in doubt, it looked like Suarez had missed his chance to become a successful Cup Series driver. Regardless of the circumstances, getting released from two elite teams in three years is not a fate from which most drivers recover.

Yet as Suarez said on Sunday, Marks and Trackhouse believed in him. Suarez was the one who put in the hard work to build the team up last year. This season, even though Chastain has dominated the headlines, Suarez has improved too. Even before his Sonoma victory, Suarez was only 10 laps shy of equaling his personal best number of laps led in one year, and there is still half a season to go. The only thing the No. 99 team needed was a day to put it all together. Sunday was that day.

Suarez’s story should be a reminder of how important it is to build a race team around the needs of its driver. The Suarez/Trackhouse pairing works because both parties have afforded each other the time and opportunity to grow together. That opportunity has paid off with Suarez’s first win, the third for Trackhouse this year, and likely two cars in the playoffs.

When asked what was different about Trackhouse compared to other teams, Suarez said “The energy. They’ve believed in me since day one. They believe in me and went through all the people and resources to make it happen.”

Sometimes, you really do just have to believe.