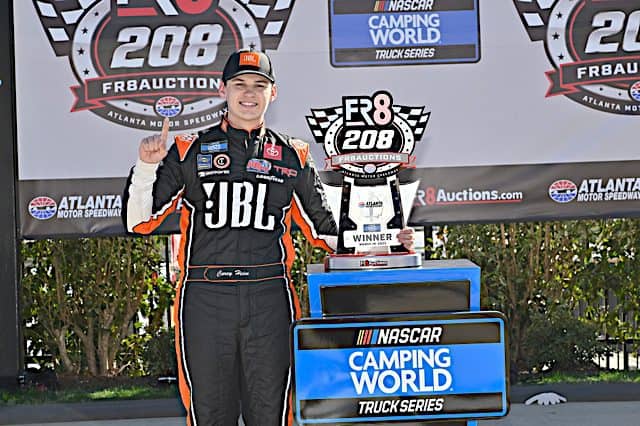 About a month shy of turning 20 years old, Corey Heim already has an impressive NASCAR resume.

Heim competed part-time in ARCA Menards Series competition in 2019-20 before running full-time for Venturini Motorsports last year. He won six races and arguably had one of the best ARCA seasons, yet he finished second in points to fellow talented Toyota driver Ty Gibbs.

This year, Heim is running part time in both the NASCAR Camping World Truck Series and ARCA. Heim confirmed to Frontstretch that the only two remaining Truck races he will not be driving the No. 51 Toyota for Kyle Busch Motorsports are at Sonoma Raceway and Knoxville Raceway.

Prior to his win in the Toyota 200, Frontstretch ARCA editor Mark Kristl spoke with Heim about his time in ARCA, his transition into Trucks and how he has found success driving for Kyle Busch.

Mark Kristl, Frontstretch: How validating was your Truck win at Atlanta?

Corey Heim: For sure, it was validating for me personally. Being a part of Kyle Busch Motorsports, the pressure is on to go win races. We’ve had a pretty up-and-down year to this point. Having that win definitely takes a little bit of pressure off. When it comes down to it, maybe if there’s a situation at the end of the race where I feel I’m in a must-win deal, that might take a little bit of pressure off me.

Kristl: I’ve spoken to your ARCA team owner Billy Venturini, and he has remarked how proud he is of you. In your career, how influential has Venturini been to you?

Heim: Super influential. I started my ARCA career off with a different team [Chad Bryant Racing], and the second year I went to Venturini. As soon as I got there, I definitely felt like I was at home with those guys; they welcomed me in.

It’s pretty uncommon for a driver to come in for five races that year, for the first year I was there, and they were very welcoming to me. I think we had a lot of success early on, and that really played into him believing in me from the start. During my full-time year, he gave me a lot of advice on his past driving and what he did to stick with it and a keep-your-head-up mentality. He really helped me out for sure.

Kristl: How have you balanced running part-time Trucks and ARCA?

Heim: It’s been a little difficult as far as being out of each seat every week. Overall, it has benefitted me just being able to get used to racetracks. For example, we went to Kansas [Speedway] with the ARCA car, and I got a really good feel on how that track was regarding weather, temperatures and the whole nine yards.

So to be able to go out there for an hour and get used to the track and hop in the truck was super beneficial for me. Whereas, I go to a place like Texas [Motor Speedway], where I’ve never been and you either get it right away or you’re kinda screwed. That is super beneficial that I have that going for me. The last ARCA race at Kansas will be my last doubleheader.

Kristl: You’re a regular contender in ARCA with eight wins. What’s your recipe for success?

Heim: My overall experience. I have 40 ARCA starts. That’s definitely more than a handful for a development series. Being able to gain that experience means a lot to me, and it’s been very beneficial for me. With any series in NASCAR, experience plays into it, and you have to really learn how to race and learn about pressured situations. The same can be said about my time with KBM. Once I gain some experience, you’ll see results in a similar fashion.

Kristl: How much has your Truck team owner Kyle Busch helped you?

Heim: He’s definitely helped me a lot since I got here. Every time I reach out to him, he gets back to me real quick. If I have any questions, I never feel like a burden reaching out to him. He’s very welcoming and helpful in any kind of situation. There’s been a couple of times where I really sat down and talked to him about racing, and he’s been a completely open book to me. So he’s been super beneficial as a team owner for me.

Kristl: When you’re not piloting the No. 51, are you there watching the race?

Heim: I’ve been to every Truck race this year, and I plan on being at them all. Kyle’s super helpful to be on the radio with and to see how the team operates with him, with how his feedback is, his communication, his overall driving, the whole nine yards. It’s super helpful to sit back and watch. I’ve been watching him for a really long time since I was a kid, and to be part of the team is super helpful for me. Looking forward to doing the same at Sonoma.

Kristl: You’re teammates with John Hunter Nemechek and Chandler Smith, who are both full time. Describe your relationship with them.

Heim: It’s pretty similar to Kyle [Busch], as far as being open books for me. John Hunter has been super beneficial, because he has a lot of experience in the Truck Series and he has been at probably 99% of these tracks. Anytime I have a question, he’s been a completely open book.

On the other side, there’s Chandler, who has pretty similar past experience as me with ARCA and Truck starts. To be able to see his mindset on everything and how he approaches it at his age and his experience level has helped me as well just so I can understand his mindset and to see how he gets through some tasks.

Kristl: You’ve raced alongside Chandler Smith in ARCA competition too, so has that been helpful to see how he drives?

Heim: We raced together in ARCA 13 times. We were always around each other. It seemed like he won quite a lot back then. It took me a lot longer to warm up to it [winning in ARCA]. To develop with him and to see how far he’s come has been pretty cool. He’s a really good racecar driver too.

Kristl: What’s been one of the biggest challenges going from the ARCA car to the Trucks?

Heim: They’re not really different. The truck has a little bit more downforce and power, but they drive pretty similarly.

Racing is the main thing I continue to learn. In these trucks, the aero gains and racing around people in the middle of the pack is pretty tough. In ARCA, you can be behind the eight ball and still be in 12th. If you make a mistake in Trucks, you’re behind the eight-ball way more than in ARCA.

Being around drivers like Matt Crafton, Stewart Friesen and other veterans has taught me a lot for me to see how they race. Every week I get better and closer to them.

Kristl: What’s an upcoming track on the Truck schedule you’re looking forward to?

Heim: IRP [Lucas Oil Indianapolis Raceway Park] is one of them. At Mid-Ohio [Sports Car Course], we were really good in the ARCA car. So there’s a handful where I’ve been at in the ARCA car, like Phoenix, too. I’m looking forward to the new challenges for sure. But to be able to come to the racetrack and already have an idea of where I’m at is very helpful for me because of my inexperience in the Truck Series.

Kristl: What’s something people don’t know about you?

Heim: I’m a huge Pittsburgh sports fan. My dad’s originally from Pittsburgh, so I’ve always been a fan of the Pirates, Steelers and Penguins.