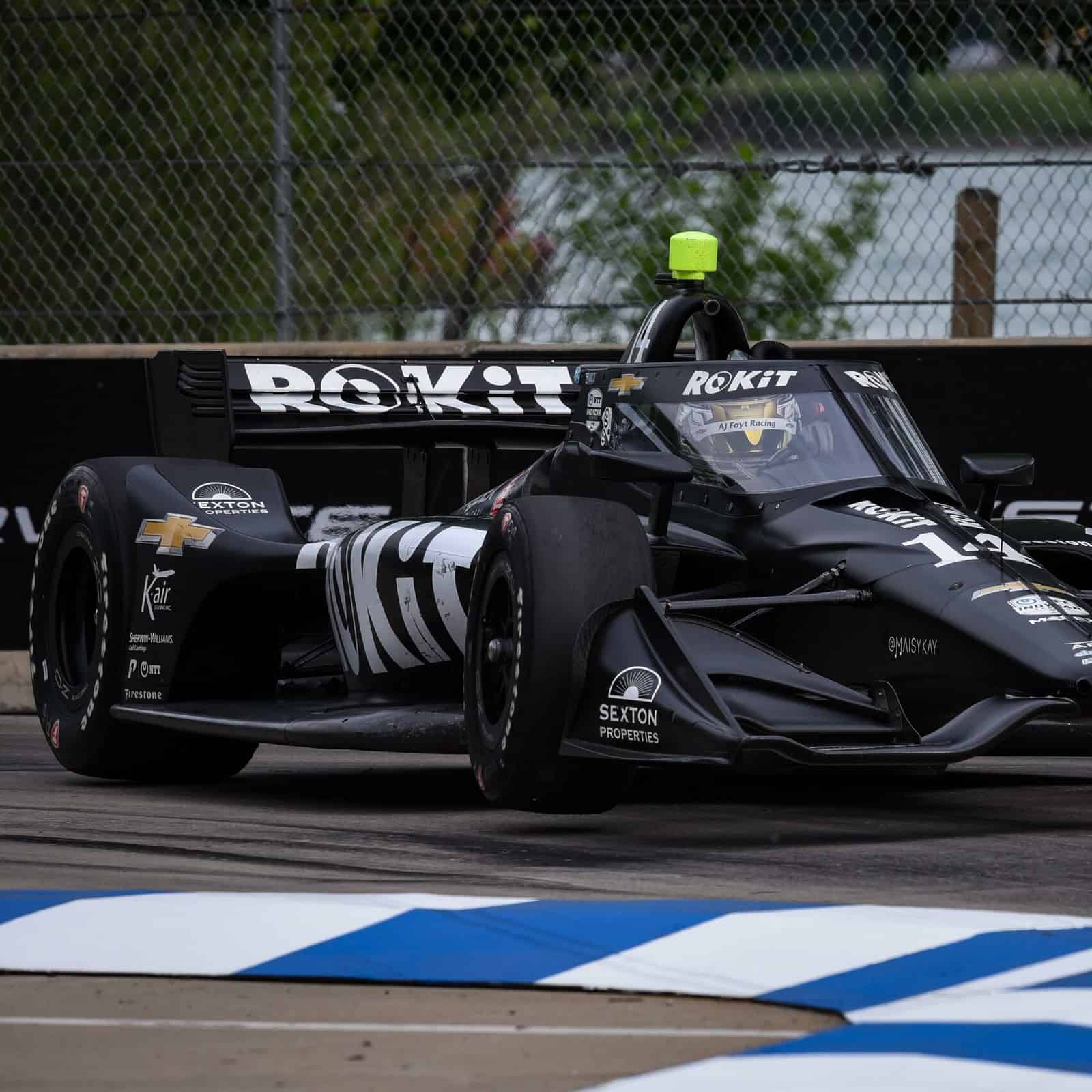 After his race weekend got off to a promising start at the Belle Isle Street Circuit, Kyle Kirkwood walked away from Sunday’s (June 5) Chevrolet Detroit Grand Prix wondering what could have been after a 24th place finish.

The rookie was running in the top five for almost half of the 70-lap race scheduled to be the last on Belle Isle before making his final pit stop on lap 48, cycling out of the pits in ninth place after Simon Pagenaud passed the Floridian shortly after Kirkwood merged onto the track.

Kirkwood was on Firestone’s red sidewall alternate compound tires that give more grip but wear faster than the primary black sidewall compound and was trying to get his tires up to temperature. However, going through turn 4, Kirkwood lost control of his car, brushing the wall with the left rear of the No. 14 A. J. Foyt Racing Chevrolet after overcorrecting on the corner’s exit.

“The grip was there in (turn) 3 and I misjudged how much grip I had,” Kirkwood told Frontstretch. “I guess in [turn] 4 I came off the curb and how much softer the tire is, it actually pogos, it bounces and then creates this big slide.”

That big slide led to the overcorrection, the hit, and then the exasperated radio message to the pits that something was wrong.

The 2021 Indy Lights champion brought the wounded car to pit lane, where race engineer Mike Colliver told Kirkwood that the toe link wasn’t the only thing broken. The wishbone was compromised, making the car unsafe for competition.

Kirkwood has hit walls harder than that at St. Petersburg and at Long Beach, but the angle of impact did more significant damage.

Contact with the wall means a broken tow link for @KKirkwoodRacing.

It was a frustrating end to what had started as a good weekend for the 2019 Indy Pro 2000 champion. Kirkwood was fastest in the first practice session and put the Lexus he was driving in the IMSA race on pole position in the GTD class.

Kirkwood had a mechanical failure in the Saturday morning (June 4) practice session that caused an incident that damaged his right hand in an impact. Later that afternoon, he qualified 15th for the IndyCar race and scored a class victory in the IMSA race with co-driver Ben Barnicoat.

After running in second place for two laps, Kirkwood’s day ended with a battered suspension, an injured hand, but unwavering confidence at the improvement the whole organization has shown.

“This weekend was a lot better than I think our Indy GP or Barber race went,” Kirkwood said. “I’s alright. It’s better. I’d rather be fighting for top five, top 10 finishes and end up in the pits early than to be fighting for 25th any day.”

The 2018 USF2000 champion later said that he would get an MRI on his right hand since the x-rays did not show any broken bones. His hand was visibly swollen and Kirkwood had a brace on his wrist after the race.

Honestly surprised I was able to drive with this right hand and even fight for a top 10. Not the finish we wanted but nonetheless a unreal race and strategy by the @AJFoytRacing team. pic.twitter.com/fpj0PNMFWU

The next IndyCar race is the Sonsio Grand Prix at Road America on Sunday, June 12th. The race airs live on NBC starting at 12:30 p.m. ET.