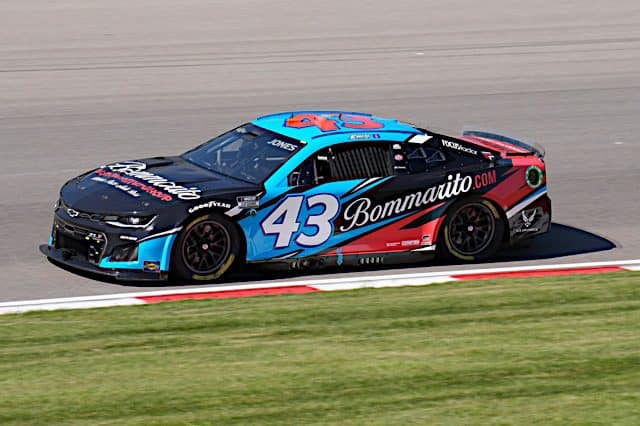 How do you kick off a NASCAR Cup Series inaugural race at a track? Well, you cannot leave out the all-time winningest driver and one third of a trio with a record-holding seven titles from the event. Leading up to the first Cup race at World Wide Technology Raceway (June 5), Friday’s festivities included Friday’s Richard Petty Day celebrating “The King” himself. It included the state of Illinois officially proclaiming June 3 as Richard Petty Day.

As a part of the celebration, Petty was able to take a lap in a replica of his 1981 Daytona 500-winning Buick Regal. Sadly, he did not take as many laps as he wanted as he did pacing the field at Darlington Raceway in 2017.

Ride along with Richard as he makes the ceremonial first lap for the Cup Series at @WWTRaceway! pic.twitter.com/uReMoDRgi5

Petty’s famous No. 43 added to a recurring theme of bringing speed to the track for Petty GMS Motorsports. Richard Petty Day was presented by Bommarito Automotive Group, and Petty GMS driver Erik Jones repped both Petty’s and Bommarito’s colors well in the Enjoy Illinois 300.

The race just outside of St. Louis, known as the ‘Gateway to the West’ was Jones’ gateway to his fifth top 10 of the season with a seventh-place finish.

In a race where passing was a challenge generally, Jones had his work cut out for him. But just like St. Louis Cardinal great Yadier Molina finding a way to constantly get the ball from home plate to second base, Jones found his way from the back of the field to the front. The 26-year-old was one of 24 drivers who had made a start at WWT Raceway previously, as Jones earned one top 10 in the NASCAR Camping World Truck Series in three starts at the track.

The Byron, Mich. native’s progress was stagnant in stage one as he struggled with little grip, resulting in a 19th-place finish after 45 laps.

The No. 43 Bommarito Chevrolet team took two tires during a yellow in stage two to advance Jones into the top 10. Jones did his part through a string of cautions, and using strategy to stay out late in the stage gave Jones two stage points with a ninth-place result.

There has no doubt been progress in the No. 43 team throughout the first 15 races, culminating in some efficient speed for the team. Jones kept his Chevrolet in the top 10 nearly the entirety of the final 100 laps, pacing the bowties at several points. Clean air was absolutely an advantage in the race, giving Jones and team the opportunity to play their hand at more strategy after a yellow with 58 laps to go.

Jones’s crew got him out just inches ahead of Kyle Busch to gain the lead for the restart. Jones got an excellent launch, but Busch ultimately overpowered him shortly after. Nevertheless, Jones was able to hold the fort inside the top five until another yellow late in the race.

Another caution for Kevin Harvick set up an overtime finish. The two-lap dash to the finish saw Jones hang on to earn the top 10.

Jones is now one top 10 away from matching his total from 2021. But more notably the speed has undoubtedly been there for a team that could be considered “new.” The burning question recently has been will we see more than 16 winners this season, potentially causing a winner to make the win-and-you’re-in format of the playoffs? Do not sleep on Jones to add to that uncertainty.

We have all heard of drivers pulling double or even triple duty between the NASCAR national series. But AJ Allmendinger may have truly defined pulling off double duty. Less than 24 hours after winning a rain-soaked event in the inaugural NASCAR Xfinity Series race at Portland International Raceway, Allmendinger flew from the Pacific Northwest with his trophy by his side to take the seat of Kaulig Racing’s No. 16 Chevrolet in St. Louis. Meanwhile, Ben Rhodes filled in for Allmendinger to practice and qualify the car; except, he ended up crashing during practice, adding to the challenge.

#NASCAR … ⁦@KauligRacing⁩ crew works on repairing the No. 16 Ben Rhodes will qualify on Saturday but AJ Allmendinger will race Sunday. pic.twitter.com/LUuncH1myC

Allmendinger had to start from the rear of the field as a result. In the Xfinity race, he had to overcome grass on the grille and several slides off the course to earn the win. The result of the Cup race was a win in his own right.

With no practice laps to his benefit, Allmendinger slowly wheeled his No. 16 Gold Fish Casino Slots Chevrolet through the field, avoiding crashes and on-track feuds between other drivers. So, what could result from running a complete Xfinity race in a different geographic location, flying in late at night, driving a repaired racecar with no practice laps and having to do it from the rear of the field? It all resulted in Allmendinger earning a 10th-place finish. The Los Gatos, Calif. native’s top 10 is the second for Kaulig’s “all-star” car that rotates among Allmendinger, Daniel Hemric and Noah Gragson.

Amongst the underdogs, Justin Haley likely had one of the quietest days. Haley is one of only a handful of drivers who have had success at the 1.25-mile track, as he won a Truck race there in 2018 after leading the final seven laps. Haley struggled with rear handling much of the race, staying outside of the top 25 for the first two stages. The No. 31 LeafFilter team stayed out late in stage two, only to fall from sixth to 28th in the final six laps of stage two. Haley relayed to his team that he felt “stuck” at one point, something that dirty air did not relieve in the race.

However, a caution with just under 20 laps remaining allowed Haley to get four fresh tires. The new Goodyear Eagles worked a charm for him, as he went from 28th to 14th by the end of the race to earn a solid top 15. It’s good progress for a young driver to turn a bad day into a good one and get the most out of it, and the 23-year-old is beginning to make a habit out of it.

Perhaps one of the best underdog runs during the race that did not result in what was expected was that of Michael McDowell‘s. Entering the race, McDowell had only led four laps in 14 races. However, he led 34 laps in the race. Not only is that the most he’s led in a race, it is the most he has led in a season, topping 33 from 2018. While he gained the lead as a result of staying out during a caution in stage two, McDowell kept his No. 34 Wise-EV Ford out in front. The pace in the car was legitimate top-10 speed, and the Arizonian kept it inside the top 15 nearly the entirety of the race.

Unfortunately, McDowell lost grip on entry as the run went along in the final stage, and shuffling on restarts left him with a 17th-place result. Still, McDowell and rookie crew chief Blake Harris have been hitting on something for over a month now, something that could come into play at the road courses and regular season finale at Daytona Superspeedway. McDowell has now finished 17th or better in six of the last seven races.

Ricky Stenhouse Jr.‘s streak of four consecutive top 10s came to an end, but not without some controversy. On lap 130, Stenhouse drove too deep into turn 3 and nailed Bubba Wallace‘s No. 23 Toyota, sending Wallace into the outside wall. Wallace’s car owner Denny Hamlin was right behind the two and showed his displeasure with Stenhouse as they slowed for the yellow.

Stenhouse would spin with 40 laps to go after cutting a right-rear tire. The damage relegated him to a 32nd-place finish.

Erik Jones (seventh): “Our day was up all day. We lost some spots there at the end with just the restarts and getting tighter. We kind of struggled with that during the day. It was a good day for us. We needed a top-10 run and we got that today with the No. 43 Bommarito Automotive Group Chevy.

“I’m happy with that. Obviously, we want to be a bit better. I think we have some things we can work on to get up there and be a little bit faster than some of those guys. We’ll keep going, but it was a solid day for us.”

AJ Allmendinger (10th): “I’m really happy with today. I didn’t know what to expect with no practice or qualifying and the car having to be fixed. The team made the car better all day. Ultimately, we needed a little bit of track position, but we were really good at the end there. I’m proud of the effort from start to finish to get a top-10 to cap off a great weekend.”

Justin Haley (14th): “We weren’t the best all day, but we had a good strategy at the end to recover for a good points day. I’m proud of everyone for the hard work to put us back into the top-15.”

What an awesome inaugural race for the Cup Series in St. Louis! pic.twitter.com/rN82cWXLGt