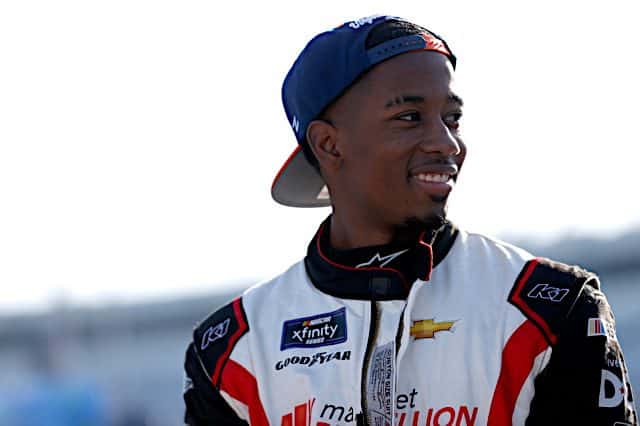 He will pilot the No. 7 Chevy Silverado.

“I’m thrilled to make my NASCAR Camping World Truck Series debut this weekend at Worldwide Technology Raceway with Spire Motorsports and Chevrolet,” Caruth said in a team release. “This is the big break I’ve been striving for and I’m going to make it count.”

Added Spire co-owner Jeff Dickerson, “Rajah Caruth is a rising star and we’re thrilled the help him take the next logical step in his career this weekend at World Wide Technology Raceway. Rajah has a tremendous upside and he’s proven that on multiple occasions in the ARCA Menards Series. He has the kind of talent Spire Motorsports looks for and this type of opportunity is exactly what my partner TJ Puchyr and I had in mind when we decided to field a NASCAR Camping World Truck Series team.”

Caruth made his NASCAR Xfinity Series debut earlier this year and has made two starts in all for Alpha Prime Racing, with a best finish of 24th at Richmond Raceway.

Spire’s Truck team, which began in 2022, has made four starts entering Gateway, each with a different driver. William Byron gave the No. 7 its first victory at Martinsville Speedway, and Chase Elliott added a top 10 at the Bristol Motor Speedway dirt track.

With 39 trucks entered at Gateway, Caruth will have to qualify in on time to make the 36-truck field. He’s one of four drivers hoping to make their series debut at the track, alongside Justin Carroll, Jake Garcia and Mason Maggio.