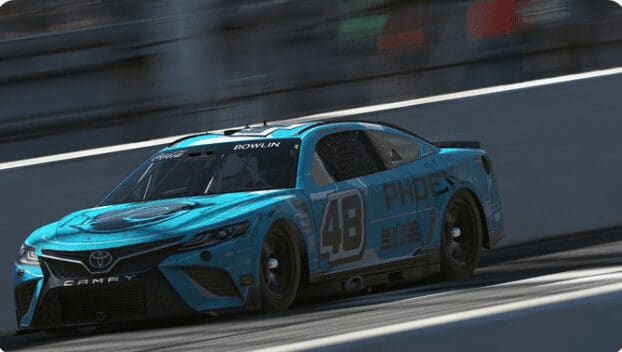 Graham Bowlin firmly established himself as a playoff contender with a statement win in the first ever eNASCAR race at World Wide Technology Raceway at Gateway on Tuesday, May 31.

Through eight races of the 2022 eNASCAR Coca-Cola iRacing Series season, Graham Bowlin had found himself just eight points outside of the playoff cutline. But that no longer matters now that he has found victory lane.

Bowlin led 97 of 120 laps in the No. 48 Charlotte Phoenix Toyota on the way to his second career win in the Coca-Cola iRacing Series. His first victory came in last year’s event at Watkins Glen International.  This also marked the first series win for the Charlotte Phoenix race team, which just joined the series this season.

In the race’s early stages, it looked as if Casey Kirwan in the No. 95 might be the dominant car of the day, as he took the lead on lap three from polesitter Cody Byus in the No. 24. Kirwan then led the next 19 laps before Bowlin took control on lap 22 and went on to lead all but two laps the rest of the race on his way to victory.

“It feels amazing,” Bowlin said. “A lot of weight lifted off my shoulders, especially before the break. We keep getting better every week, so hopefully the momentum keeps rolling our way.”

Despite being a brand new racetrack on the Coca-Cola iRacing Series schedule, the drivers seemed take the 1.25-mile flat-banked oval near St. Louis very quickly. It was a mostly clean race, with only the occasional contact between cars and just one caution on lap 60 involving a crash in turn 1 between Garrett Manes in the No. 31 Elliott Sadler eRacing Chevrolet and Jimmy Mullis in the No. 46 Rise eSports Chevrolet.

However, the caution came at a critical juncture, as the field was in the middle of green flag pit stops. Some drivers were able to advance their track position with this split pit strategy, while others were caught a lap down or pitting when pit road was closed, which cost them several spots. Out of all the drivers, Bowlin was arguably the luckiest, as he made it onto pit road just before the caution lights came on at pit entrance.

A LUCKY BREAK for once for @BowlinGraham who made it on to pit road before the yellow! He'll maintain the lead on the restart!#eNASCAR | @iRacing pic.twitter.com/XzuxBT2LQD

As a result, Bowlin cycled back to the lead for what proved to be the final restart on lap 64. Zack Novak, driver of the No. 5 Rise eSports Chevrolet, came close to contending with Bowlin. Novak led two laps before ultimately fading to a distant second, finishing 2.837 seconds behind Bowlin.

For Novak, it was the second straight week finishing in the runner-up spot following his near-miss at Charlotte Motor Speedway. But he didn’t seem too upset about it, considering he started 19th and struggled with the car setup in the days leading up to the race.

“I was a little disappointed at Charlotte to come home P2, but this one I definitely can’t be too disappointed. I’m pretty happy about it,” Novak said.

Logan Clampitt was another driver happy to come away with a good finish at World Wide Technology Raceway. Celebrating his 22nd birthday on race day, Clampitt rang in the occasion with a third-place finish in his No. 97 William Byron eSports Chevrolet. The 2022 season had been unkind to Clampitt up to this point, with six finishes outside the top 30 in the first eight races.

“It is good to come away with a podium finish on my birthday,” Clampitt said. “Oh man, finally something went my way this season.”

Malik Ray in the No. 7 Ford and Ryan Luza in the No. 4 XSET Chevrolet rounded out the top-five finishers. Matt Bussa followed up his victory last week at Charlotte with a solid sixth-place finish after starting at the rear of the field in his No. 75 Mode Motorsports Ford.

Unfortunately work is keeping me from racing tonight in the @eNASCARCocaCola series tonight, but that doesn't mean I can't try and spy on @KeeganLeahy while flying over his house. @NASCAR @iRacing pic.twitter.com/xLk9pb7aOx

The eNASCAR Coca-Cola iRacing Series will return in three weeks with a race at Nashville Superspeedway on Tuesday, June 21. The race will start at 9 p.m. ET, and it will be broadcast live on eNASCAR.com/live, YouTube.com/iRacing and Twitch.tv/iRacing.