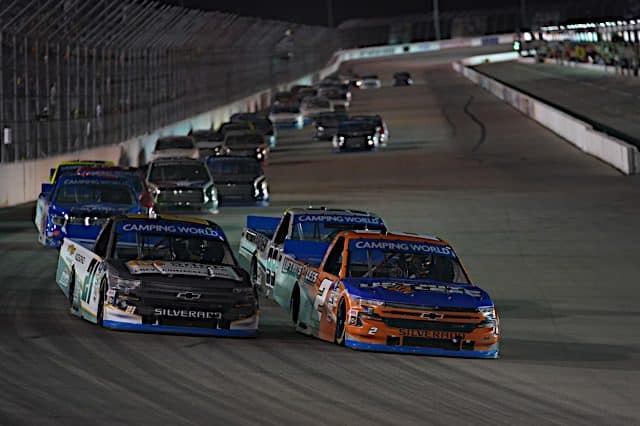 The NASCAR Camping World Truck Series heads to Worldwide Technology Raceway for its 11th race of the season this Saturday, June 4.

With a total of 40 teams attempting to make the field, four of them will go home when qualifying for the 36-truck field is all said done on Friday evening, barring any entry list changes.

Corey Heim will once again be behind the wheel of the No. 51 Kyle Busch Motorsports entry.

Jordan Anderson returns to make his fourth start of the year in his No. 3 Chevrolet Silverado.

Tyler Hill will return to pilot the No. 5 for his family-owned race team as well.

Johnny Sauter is back as well behind the wheel of the No. 13 Toyota for ThorSport Racing.

Mason Maggio will attempt his Truck Series debut in the No. 33 for Reaume Brothers Racing.

Jake Garcia will also attempt his first Truck start in the No. 35 Chevrolet for McAnally-Hilgemann Racing.

Blake Lothian returns for his second career Truck event in the No. 43 Chevrolet for RBR.

Justin Carroll joins the list of drivers attempting to make their first series start as well in his No. 90 Toyota.

Spire Motorsports has also entered its No. 7 Chevrolet but has not announced its driver. The team has occasionally withdrawn the truck by race day in the past.

The 160-lap event will be broadcasted live on Saturday afternoon on FOX Sports 1 at 1:30 p.m. ET.