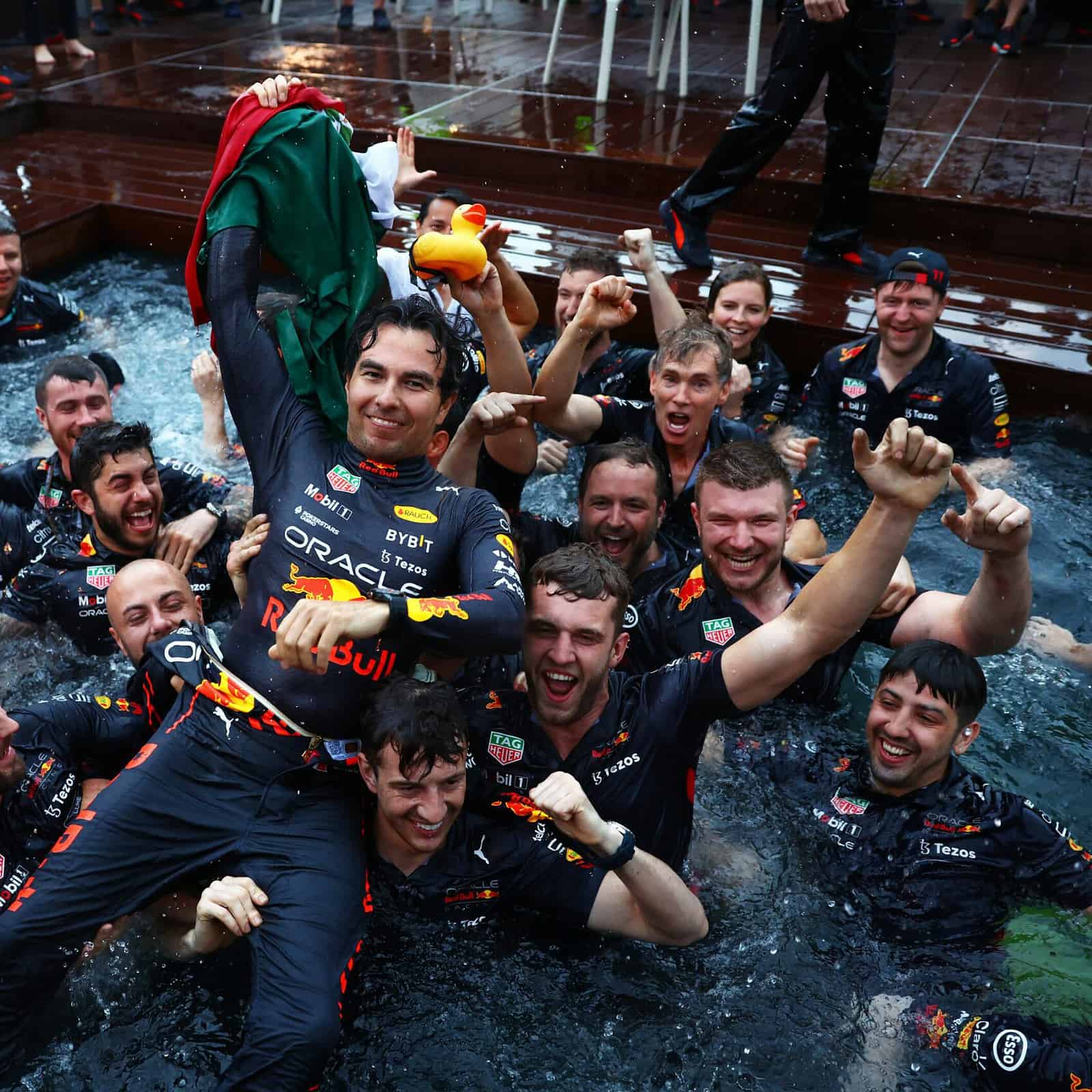 MONTE-CARLO, MONACO - MAY 29: Race winner Sergio Perez of Mexico and Oracle Red Bull Racing celebrates with his team by jumping into the pool after the F1 Grand Prix of Monaco at Circuit de Monaco on May 29, 2022 in Monte-Carlo, Monaco. (Photo by Mark Thompson/Getty Images)

Confusion surrounded the beginning of the 2022 Monaco Grand Prix.

The race director chose to delay the start of the race because of rain. However, at the time of the decision, rain could have hardly been considered a serious negative to going lights out. By the time the delay began to take effect, the rain began to fall harder and the decision had already been made to run the formation lap behind the safety car.

As drivers began the formation lap, word from the FIA came that the delay in the start was the result of watching the weather and whether or not a strong storm cell would dump rain on the track. Though race control thought the rain might dodge the track, instead, the red flag came out while on the formation lap and a delay held back the start an additional 10 minutes. Drivers returned to pit lane, parked their cars and began mulling about.

For a revered race on the calendar, it suffered an inauspicious start.

Far be it for Sergio Perez to complain about any of these issues as he scored his first win of 2022 and the third of his career. He continues to hold down the third spot in the standings but is now 15 points behind Max Verstappen (with 125).

Carlos Sainz finished where he started, taking second with a clean drive. Verstappen never flashed dominant speed or handling and seemed happy to take what he could, finishing third after his team gifted him into third on brilliant pit strategy.

Charles Leclerc, who started on pole and looked to be on his way to earning his first home win, fell to fourth when Ferrari failed to cover Red Bullʻs smart moves. His disappointment rang through as he said to the team on the cooldown lap, “No words, no words.”

George Russell put together another quiet and smooth drive to finish fifth and has still yet to finish outside of the top five. Lando Norris earned sixth even as he has been recovering from tonsillitis and also gained a point for the fastest lap.

Fernando Alonso made his presence felt with a strange drive where he started seventh and finished seventh and yet made it appear more dramatic than necessary by backing up the second half of the field. Lewis Hamilton finished eight and likely will have nightmares about following Alonso on the streets in the principality.

Valtteri Bottas continued his solid efforts with Alfa Romeo by earning ninth for the team, while Sebastian Vettel found his groove at Monaco and was able to score the last points paying position.

On the first lap, under the safety car, Nicholas Latifi bounced into the barrier at the hairpin while Lance Stroll grazed a wall and punctured his right rear. The safety car was called in for the third lap under still rather wet conditions.

Pierre Gasly provided much of the entertainment in the early sector of the race. Pitting early for intermediates, Gasly fell back to 18th and meandered in that position for a few laps. As the track began to dry, Gasly enjoyed his team’s strategic call and began moving forward making his way up to 12th before the frontrunners began pitting for intermediates.

Leclerc, with a six-second lead, pitted on lap 19 for intermediates and came out in third behind Perez, who had already pitted.

Lap 27 saw Mick Schumacher bring out the virtual safety car/safety car/red flag period with a nasty wreck that tore off the rear half of his car when impacting the crash barriers.

A dramatic crash for Mick Schumacher

Watch all the key moments from a dramatic race 🎥#MonacoGP #F1

With the race changed from lap count to a timer, DRS came alive with 30 minutes left. The front four, alternating between Red Bull and Ferrari, broke away to form a race of their own. At one point, the Red Bulls looked like they would cruise to first and third, but the medium tires started giving up with 10 minutes to go, and Sainz closed the gap to under a second.

Perez made good in holding Sainz off, never missing a braking zone or stepping out, and took the win. The Red Bulls comprised two-thirds of the podium in what must have looked like an ultimate blow to Ferrari.

That Ferrari lodged protests against both Red Bull drivers, claiming they had not adhered to the exit lane coming out of the pits, showed just how desperate the Prancing Horse were to reverse their fortunes. The protests were ultimately dismissed and Red Bull faced no further scrutiny.

– At one point, hard, intermediate (wet) and wet tires all raced around the track. When all are on equal footing, the pecking order for the teams is usually pretty clear. But with teams employing different ideas of what tires might work best, the field became more vulnerable to a change in normalcy. Though the drama afforded by the tire strategies might have helped for unpredictable results, any prospect for such an outcome disappeared when Schumacher caused a red flag and teams returned to the paddock to sort out their tires.

– Monaco races are often strung-out affairs, with most drivers facing little ability to make any overtakes. One of the benefits of the rain came in the form of closer racing. The gaps between many of the drivers hovered under two seconds, with even Sainz stalking Perez for the second half of the race with a one-second gap. Hamilton found the same kind of gap in his pursuit of Alonso. The trouble on the narrow course is that catching the driver ahead is one thing, being able to make a move is another. The race featured what became a train of cars stuck behind Alonso, who was turning laps almost three seconds off the pace.

– Race management by both the FIA and many teams left a lot to be desired. The confusion surrounding both the start time, then a further delay, then a red flag, then a start under safety car all added up to a bizarre way to begin a GP. That the race directors were trying to play a game against the weather ended up putting the teams on the back foot, and many showed how unable to adapt they were.

– Some of the surrounding chatter about the Monaco GP focused on the fact that the 2022 race is the last of the current contract. Both drivers and announcers mentioned this at some point during the weekend, almost making it seem like the prospect of Monaco not being on the F1 calendar was some kind of reality. It all comes across like sound and fury signifying nothing. Not only is it hard to believe that Monaco would not be part of the race calendar going forward, it’s also tough to believe that the relationship has somehow soured to the point that either party would be idiotic enough to divorce.

– How did it go so wrong for Ferrari?

– What was the reason for not having a standing start after the red-flag period on lap 33? The track had become dry and there was every reason to think that a standing start would be a wonderful way to resume. That every car had slick tires would have indicated such a resumption would be possible; never mind the fact that DRS came into play within a few laps of the safety car taking to the pits.

– Alonso paced his car at a rate of about three seconds off of what would be expected in the last 30 minutes. What Alonso was trying to do is still up for debate. The thought was that he might be saving his tires. But if that is the case, then why were the Red Bulls and Russell, who were ahead of him and also on mediums, running at full sail?

At one point, Hamilton asked his engineer, Pete Bonnington, how far ahead the leaders had gotten.  Bonnington replied, “More important is how close they are behind, Lewis.”

A bewildered Hamilton responded, “They’re behind me?”

The trouble is that not only did Alonsoʻs drive turn the race into a bottled-up compression of cars but it also put his teammate, Ocon, in a position to lose the points he would have gained because of his timed penalty for causing a collision. At some point it will make sense, but even now, it seems strange.

– It is tough to be the teammate of the superstar. Bottas probably has a bookʻs worth of comments of driving in the shadow of Hamilton during his time at Mercedes. The wins come at a slower rate with the spotlight less bright, but none of that indicates less desire to win. Hence, Perez deserves all the kudos for his race win in Monaco. Coming after the Spanish GP, where Perez gave way to team orders and let Verstappen by for the win, Perez made no mistake in claiming this victory. With Sainz all over his rear wing during the final 10 minutes, Perez did all he could to keep Sainz frustrated and was able to put away the win in a steely fashion.

The Results: Grand Prix of Monaco; Monaco Street Circuit (May 29)