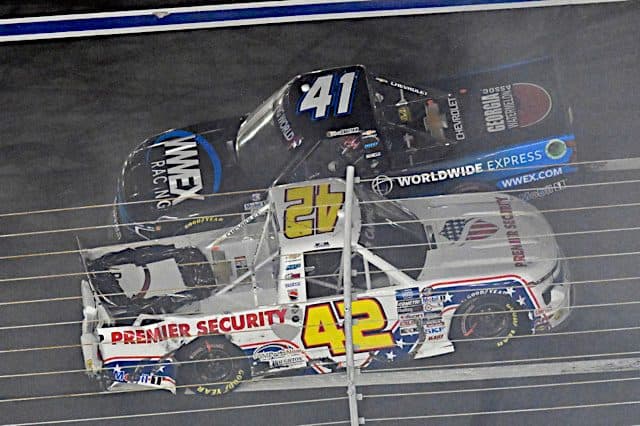 While Ross Chastain brought Niece Motorsports its first win of the season, the story continues to be about his teammate, Carson Hocevar after another almost.

Hocevar has come close to winning his first NASCAR Camping World Truck Series career race several times in both 2021 and 2022, with three runners-up finishes, including last year at Charlotte Motor Speedway. But Friday night’s (May 27) race at Charlotte may have been the most heartbreaking loss yet.

Hocevar led 57 laps on the night, the most of anyone in the field. As he crossed the line with five laps to go, he had a six-second lead over second-place Ryan Preece and was pretty much on cruise control. It looked like he was finally going to break through and get his first career win.

That is, until Jesse Little and Tyler Ankrum crashed in turn 4 with four laps to go. The caution came out and evaporated Hocevar’s huge lead, putting him side-by-side with Preece on the following restart. John Hunter Nemechek took the top lane in row two, leaving Chastain to attempt to push his teammate to the lead on the bottom for the overtime restart.

But Chastain’s truck did not go on the restart, leaving Hocevar and Preece side-by-side through turns 1 and 2. Then the two leaders came together. And then came together again.

Hocevar washed up the track off of turn 2 and pushed Preece up into the wall. He then got loose underneath Preece in turn 3, sending Preece into the wall again. The contact the second time sent the No. 42 spinning up into the turn 4 wall, crunching the back end of his truck.

Replays on the FOX Sports 1 broadcast showed visible frustration from Hocevar while he was sitting on pit road.

While Hocevar managed to salvage a 16th-place finish, it didn’t make up for the fact that he was oh so close yet again to winning. He drove up to Chastain after the race to congratulate him at the start-finish line, showing his sportsmanship in a time of frustration.

Chastain expressed his heartbreak for Hocevar in his frontstretch post-race interview.

“Carson Hocevar and that No. 42 team — they dominated tonight,” Chastain told FS1. “Al Niece has given us trucks to come out here and fight for wins, and I hate it so much for Carson.

“… I’m so proud of Carson Hocevar. I just want to say that over and over. He’s a future star. He’s such a goofy kid, and I love him. He learns so quick.”

Hocevar took full responsibility for the accident with Preece, saying that it was a poor move on his part.

“I tried really hard, and tried too hard,” a tearful Hocevar told FS1. “I didn’t get a good restart and just tried too hard. I tried to wash [Preece] up, and I just crashed myself. I feel like a siss crying, but this is all I’ve ever wanted to do.”

On the other hand, Preece, who ended up 11th after the contact, showed extreme displeasure about the move.

“All you kids watching right now, wanting to get to this level, don’t do that,” Preece told FS1. “Race with respect, don’t wreck the guy on the outside of you trying to win your first race — it doesn’t get you anywhere.”

racers race. I was gonna try and track out as much as possible to stall you out down the back, you got to my rr earlier then expected got me really loose and I crashed us. Racers try to capitalize and sometimes get greedy and step too far. that was me tonight. call it how it is.

Part of Preece’s frustration may have stemmed from only having two races left in the David Gilliland Racing No. 17 truck this season, at Pocono Raceway and Kansas Speedway.

Despite not getting that first win, Hocevar leaves Charlotte eighth in the point standings, 63 points over the playoff cutline.