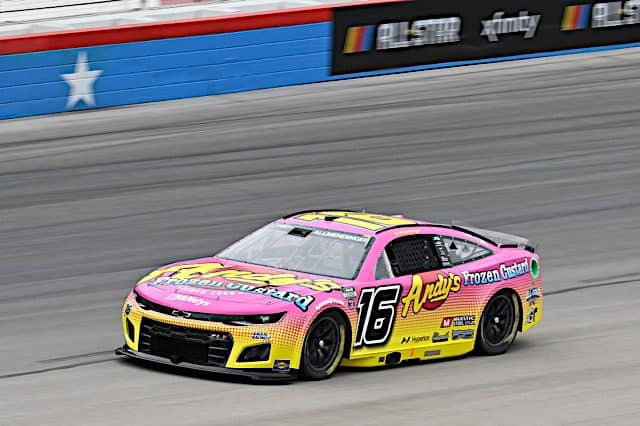 Sixteen NASCAR Cup Series teams and drivers were sweating it out with their chances of making the All-Star Race Sunday (May 22) on a hinge. Who could blame them, considering they had to travel nearly halfway across the country to Texas Motor Speedway with the contingency of them going home without even making the big show.

Meanwhile, AJ Allmendinger got to remain as cool as Andy’s Frozen Custard with his fate having been determined last year. Allmendinger’s emotional victory earned Kaulig Racing their first triumph at the Indianapolis Motor Speedway road course, which punched his ticket to the All-Star Race. When Kaulig announced Allmendinger as a part-time driver in its “all-star” car, it automatically gave him the opportunity to pursue a million big ones in the main show.

The excitement and energy we are used to from the Los Gatos, Calif. native was on display in the driver intros, the sixth time he has been in the main event of the evening. It was only the second time he has not had to race his way through the Open race. The result would produce his best career finish in the exhibition event.

Allmendinger started the race from the 10th position. In a race where passing was difficult and tire failures were prevalent, Allmendinger’s No. 16 Andy’s Frozen Custard Chevrolet was smooth as soft serve, save for a moment in stage one where he drifted up the track in turn 1.

An overtime finish to stage three allowed Allmendinger to move up to 11th. He would begin the final stage from the 10th spot once again. A caution with just under 30 laps remaining saw teams split on strategy. Several cars stayed out, while Allmendinger pitted with others, taking four tires.

The move proved effective, as Allmendinger rocketed from 16th up to 12th by the end of the race. However, the rules stated that the race had to finish under green. Just as race leader Ryan Blaney was taking the checkered flag, a caution flew for Ricky Stenhouse Jr. The restart allowed Allmendinger to improve his finish, coming home in seventh. His previous high in the All-Star Race was eighth.

FOX Sports analyst Larry McReynolds mentioned during the broadcast for qualifying how winning before the All-Star Race guaranteed a driver two appearances in the event. That applied to Michael McDowell, whose 2021 Daytona 500 upset locked him into his second consecutive appearance in the 125-lap race. McDowell fought a tight handling racecar throughout the night, making one lone appearance in the top five in stage three after several drivers pitted. When it was all said and done, the No. 34 WISE-EV Ford crossed the line in the 15th position.

In an inadvertent way, Stenhouse ended up playing a pivotal role in the conclusion of the race. Stenhouse transferred into the race with a dominant segment one victory in the Open race. After getting up to seventh in segment three, disaster nearly struck when Stenhouse lost a tire and reported a bent toe link. The No. 47 Kroger/Viva Towels Chevrolet fell two laps down, but was able to return to the lead lap as a beneficiary of the free pass. But his eventful night wasn’t over. While running in 13th on the final lap, Stenhouse’s tire went down again, causing him to slide up the track and brush the turn 2 wall. It appeared that the contact was not too forceful, and Stenhouse got his car out of harm’s way. However, NASCAR decided to throw the yellow, nearly thwarting Blaney’s first All-Star victory. Stenhouse ended the race in 19th.

Erik Jones advanced to the race by winning the fan vote and sought to join 2008 winner Kasey Kahne as the only drivers to win the race by virtue of the fan vote. Unfortunately, the night was opposite for the Byron, Mich. native. Jones struggled to crack the top 15 for most of the night and his night was put to rest in stage four. With just under 30 laps to go, Jones’ had a tire expire, sending him into the turn 4 outside wall. The damage would cut his night short, relegating him to a 20th-place finish.

Corey LaJoie nearly pulled off an upset to race his way into the All-Star Race. LaJoie gave teams some notes for the book early in the evening, staying out after segment one of the Open race to inherit the lead. LaJoie kept his No. 7 Built Bar Chevrolet out in front for the first eight laps when a caution flew for teammate Landon Cassill.

The restart allowed those who had pitted to drive around LaJoie, but he wouldn’t go quietly. As a result of their strategy, LaJoie started the third and final segment on fresher tires than the leaders. He quickly raced up to fifth when Tyler Reddick spun out a couple of circuits into the segment. The fresher tires would not be enough, however, as LaJoie would come up three spots short in the fourth position.

AJ Allmendinger (seventh): “It’s really cool to be in the All-Star race, because it means we’ve won a Cup race. That’s really significant for this team, and I’m super proud of them. I felt like we were way off in the first stage and had to kind of fine tune our No. 16 Andy’s Frozen Custard Camaro ZL1 to get the most out of it. Overall, I felt like we made it better by the end of the race, but we still needed a bit more. I’m proud of our whole team to be a part of this race, get a decent finish out of it, and keep learning.”

Last year, Andy’s Frozen Custard adorned Austin Dillon‘s No. 3 Chevrolet with blue and yellow colors, finished off with ice cream shapes in the wrap. This season, Andy’s returned to NASCAR’s hot night with Allmendinger, and they were rewarded with a top 10 finish. The car went from blue and yellow to hot pink and yellow under the lights this year. In addition, Andy’s announced a new, limited-time flavor called the Jackhammer for race fans to try. I may have to make a road trip to Andy’s to try it out.

Our first @NASCAR All-Star is in the rear-view!@AJDinger did a great job all race long but especially during the final green/white/checkered to grab a few extra spots!

Not how we wanted to end the night in Texas, we’ll take what we’ve learned and come back stronger.

It was a tough day…we battled hard and gave it our all! Keeping our head up as we move forward to @CLTMotorSpdwy! pic.twitter.com/cXcUPZf94f