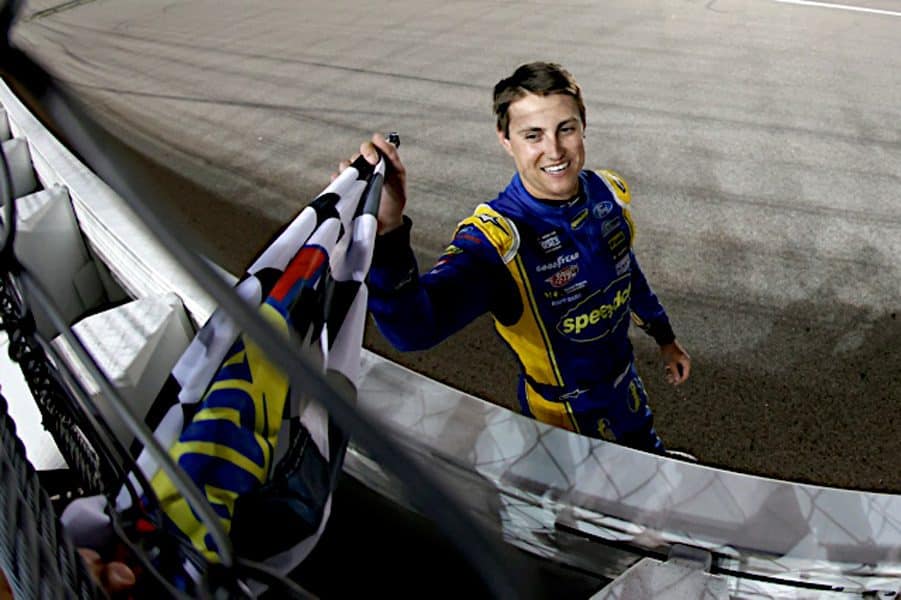 The third time was the charm for Zane Smith.

The 22-year-old upstart picked up his third win of the NASCAR Camping World Truck Series season Saturday night (May 14) at Kansas Speedway. Smith now has as many victories in the past eight races as his first two years of running the series full time.

ThorSport Racing’s Ty Majeski finished a career-best second while GMS Racing’s Grant Enfinger came in third. Chandler Smith rebounded from a poor pit stop that sent him down a lap to finish fourth while Christian Eckes rounded out the top five.

On lap 106, Corey Heim, who won stage one and led 18 laps, smacked the wall in his No. 51 JBL Kyle Busch Motorsports Toyota and was forced to enter the pits. It added insult to injury for the 19-year-old Georgia driver, who also reported engine woes prior to his date with the wall. He finished 10 laps off the pace in 33rd.

Prior to the race, Road Ranger announced a new partnership with ThorSport Racing to serve as the primary sponsor on the No. 66 Toyota Tundra TRD Pro of Majeski at Texas and four additional races this season. It was a fantastic opening to the partnership as Majeski came within 1.653 seconds of scoring his first-ever Camping World Truck Series victory.

Chandler Smith lost a lap after running out of fuel at the end of stage one. However, he recovered to finish fourth.

KBM trucks occupied two of the top-10 spots with Smith and John Hunter Nemechek finishing fourth and sixth, respectively. However, the single-truck operation of Bob Jenkins and their star driver, Zane Smith, led 81 percent of the laps.

Smith nearly ran out of gas at the end of stage one, which could have ruined his chances. Majeski also had a shot to pass on the final restart but never could get close enough to give Smith trouble.

Other than that, it really wasn’t a contest up front. In the final stage, Smith was leading by nearly four seconds when Kris Wright hit the wall on lap 91 to bring out a caution.

19 trucks within the 35-truck field finished on the lead lap.

At least you tried

After the incident with Wright, Corey Heim exited the pits with the lead following a phenomenal stop. However, Smith took the lead right back after they went back green on lap 96.

With about 20 laps remaining, Smith was outpacing Nemechek by about 4.1 seconds when Dean Thompson spun on the backstretch to bring out the fourth and final caution of the race.

None of the trucks near the front pit, but Nemechek thought there might be an opportunity. Instead, Majeski and Grant Enfinger ganged up on Nemechek to take over second and third. The KBM Motorsports driver later explained he just didn’t get going on that restart.

Perennial title contender Grant Enfinger is 37 years old now and hasn’t won a race in two years, but you can never count him out. The 10-year truck veteran picked up his second straight third-place finish. Furthermore, Enfinger has finished third in three out of the last five races at Kansas.

Earlier in the year, Enfinger picked up two straight eighth-place runs at Martinsville and Bristol. Perhaps he is on track to win two straight races at some point this season.

After four consecutive finishes outside the top 10, Derek Kraus had a smooth ride, both qualifying and finishing in eighth place. The 20-year-old, who hails from Stratford, Wisc. and drives the No. 19 McAnally-Hilgemann Racing Chevrolet, is attempting to manifest some form of consistency. Following a 13-top 10 performance during the 2020 season, many thought Kraus would become a bonafide title contender in 2021. However, the exact opposite transpired and he managed just four top-10 finishes and one top five, missing the postseason for a second straight year.

2022 has been even worse; Kraus had just one top 10 during the first seven races prior to Kansas. Perhaps this race is the one he needs to turn his tough luck around.

Sure, Heim didn’t have the best finish. However, he qualified on the outside of the front row and won stage one prior to having engine issues. The kid showed a lot of promise out there.

Despite picking up a series-high third win of the season, Smith sits third in the standings (-21) just behind Darlington winner Nemechek (-20) and reigning series champion Rhodes. A miraculous rebound from Chandler Smith put him 29 points back of Rhodes, while Majeski has a Jimmie Johnson-like deficit (48 points) heading into Texas Motor Speedway next weekend.

A solid past few weeks for Enfinger places him ninth in points (-83) while three-time series champion Crafton picked up a ninth-place finish to hold onto the final playoff spot — for now — in 10th (-87).

The trucks are back in action next Friday, May 20, at Texas Motor Speedway. Television coverage begins at 8:30 p.m. ET on FOX Sports 1.