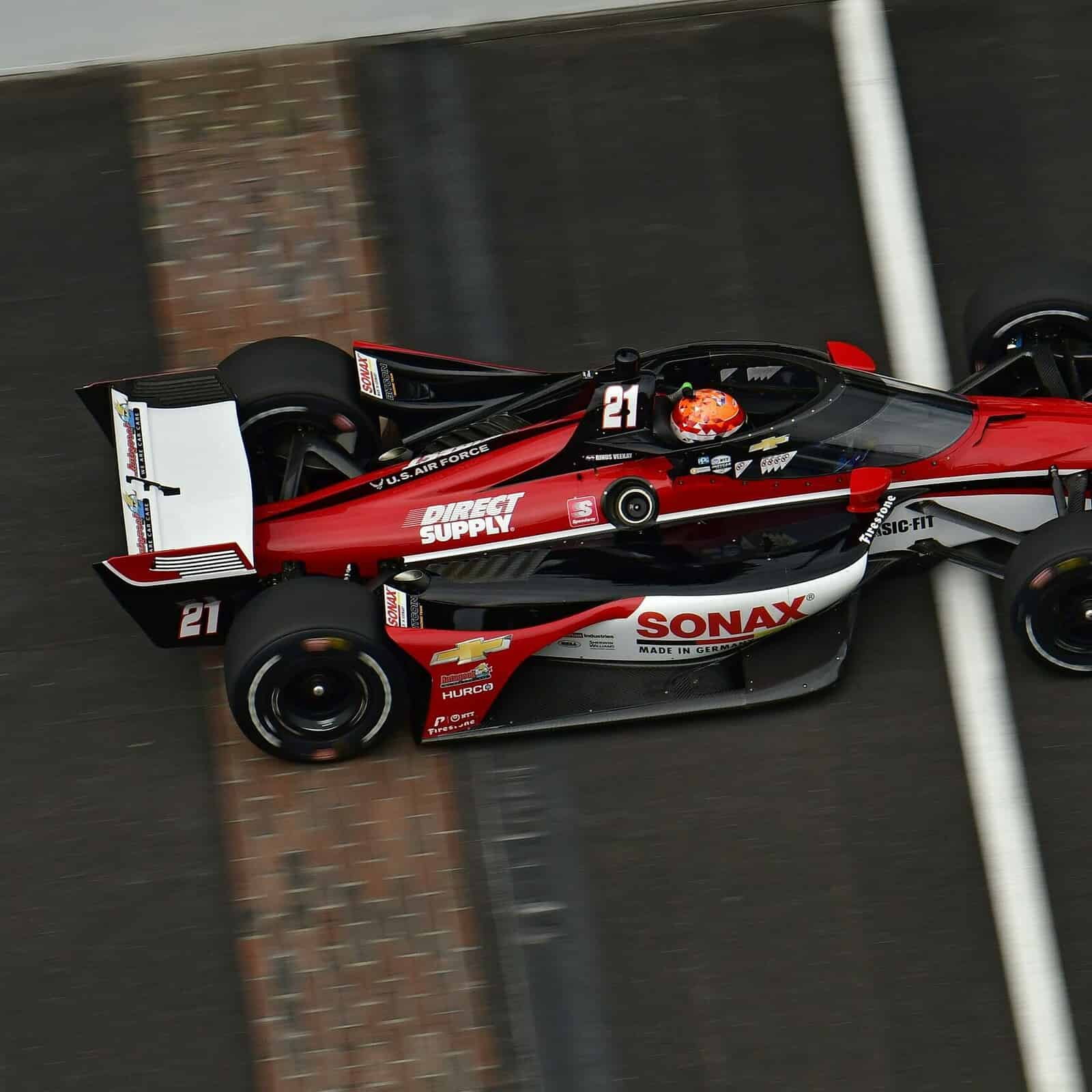 As Rinus VeeKay comes back to the site of his first NTT IndyCar Series win, the Dutch racer will be hot off of a pole and podium at the most recent race at Barber Motorsports Park.

With high amounts of confidence, the 21-year-old comes back to the Indianapolis Motor Speedway road course with a lot of similarities for his No. 21 Ed Carpenter Racing Chevrolet. The 14-turn,  2.439 mile road course has no major changes on it for 2022 except for the pavement sealer put down before the Indiana winter that may not be completely worn off before practice begins for Saturday’s (May 14th) GMR Grand Prix.

The cars haven’t changed in road/street course configuration and Firestone is bringing the same type of tires from last year’s races at the IMS road course to this race, which helps VeeKay’s race engineer Matt Barnes with creating the perfect setup for VeeKay.

Every road course has their defining characteristics and IMS’s road course is no exception. The course is extremely flat, much like Portland International Raceway. The surface also has a lot of grip inside of it, helping drivers go faster as more and more rubber is put down from either the Road to Indy or from the Indy cars.

The track has two lengthy straightaways leading into good passing opportunities. One might think that engineers would set up the cars with less downforce so they go faster on the straights, that’s not always the case.

“When you look at it and people immediately think, oh, well, you’re definitely going to trim there,” Barnes said. “But that’s not necessarily the case. A lot of time comes from the corners, which are all fairly slow speed for the most part. It tends to be a track that despite having a ton of grip, still favors downforce. I think that would surprise most people just looking at it, but that makes it unique.”

When looking at the circuit, there are several corners that engineers look at with more importance than the rest of the lap. Turn 4 is a right-hander that leads onto the short straightaway before the chicane (turns 5-6) leading to Hulman Boulevard. If a driver gets through that turn well and can carry good speed through the exit, they will be set up well for the chicane and the run to make a pass going into the turn 7 braking zone.

Going further through the lap, turn 10 is a right-hander that leads into a flat-out portion of track in turn 11 before a hard braking zone in turn 12.

“That’s an important corner,” Barnes said of turn 10. “That tends to be a big chunk of up time. Even though it doesn’t look like a straight, that’s all flat through there and kind of in the same way that [turn] 4 effects that lap time there, [turn] 10 does as well.”

The left-hander at turn 13 is the other big corner that Barnes looks at on the circuit. The pit entry is on the outside of that corner, but that turn sets up the run through turn 14 and back onto the main straightaway of the oval. Getting through there with a better exit speed makes overtaking that much easier going into the turn 1 braking zone.

Last year’s race was primarily a three-stop race for all competitors, with some drivers having shorter opening stints to get onto fresher tires sooner with other drivers going longer. One thing that probably won’t change is that the race will be one to feature the Firestone red sidewall alternate compound tires.

INDYCAR mandates that a driver must run two laps on each compound of tire in the race. The primary compound tires have black sidewalls and give less grip, but they last longer than the red sidewall tires. The alternate red tires at IMS don’t fall off as much as they do on other circuits, so they are the preferred tire for this track.

While the IMS road course is still important, the Month of May at Indianapolis requires heavy focus on the Indianapolis 500 on May 29th. The race on the road course shouldn’t take away focus from the 500, but it’s impossible to not have the 500 on your mind while the cars are going north up the main straight instead of south as they do on the oval.

“It can be a distraction, but I think for us specifically we feel very prepared for both,” Barnes said. “So it’s also a good position to be in from, you know if you’re Rinus, you’ve been here at the road course, you’ve won the pole, you’ve won the race, you know you can do it. You know it’s not an insurmountable challenge.”

The GMR Grand Prix of Indianapolis is Saturday, May 14 at 3 p.m. ET on NBC.