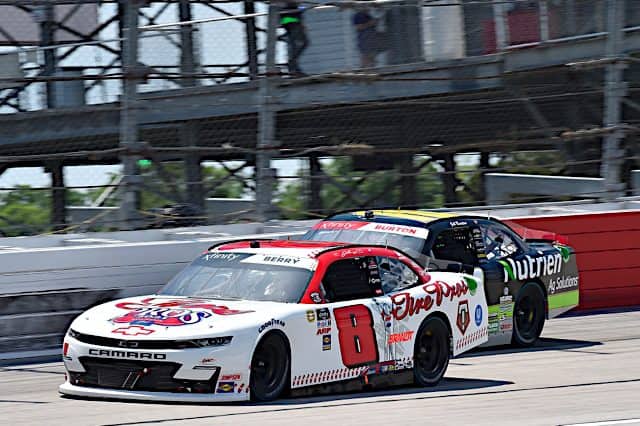 Which of the Darlington Raceway throwback paint schemes is your favorite and why?

Anthony Damcott: By far, Chris Buescher‘s throwback is my favorite. As a Matt Kenseth fan growing up, all the way until he retired, that scheme means a lot to me. There are some other fantastic throwbacks this year (if this scheme wasn’t running, I’d have said Ty Gibbs‘ Bobby Labonte throwback or William Byron‘s Jeff Gordon throwback), but the Buescher one has to be my favorite this year because of childhood memories.

Luken Glover: It is hard to go against Byron’s throwback to Gordon’s flames. That car deserves to be at the top of the list. Buescher’s throwback to Kenseth is an honorable mention as well. However, I’m going with Ross Chastain‘s throwback to Dale Earnhardt Jr. Trackhouse Racing Team in general did a great job, with Daniel Suarez throwing back to Dale Earnhardt. This honors the first time Little E raced the Intimidator. Chastain’s car replicates the font and brings back the polar bear for Coca-Cola. It is really cool to see them bring that back.

Mike Neff: As much as I love the No. 42 scheme for Ty Dillon, my favorite is the Stacking Pennies scheme for Corey LaJoie. It is as old school as it gets.

Josh Roller: There are a lot of great throwback schemes for Darlington’s three races this weekend. But my favorite is Byron’s No. 24 Axalta throwback to Gordon’s 2007 DuPont scheme. I started watching NASCAR in 2001, and it was the first variation of that scheme with which I fell in love. The blue base and red (or orange flames depending on the race and picture quality) and yellow No. 24 popped at me. It was the pinnacle of NASCAR turning the page into the 21st century. I drew that car in kindergarten, I loved it so much. And when I traveled to my first race at Michigan International Speedway in 2001, seeing it win solidified my fandom. So seeing Byron, Axalta and Hendrick Motorsports throw it back to that era of Gordon’s career is really awesome. I wish Gordon ran it before he retiredm but waiting has made it that much more special.

Kaleb Vestal: Probably Byron’s Gordon 2007 throwback. That was the paint scheme I remember Gordon running when I was 5-6 years old at the time, and it brings back a lot of nostalgia.

Glover: Not right now. Teams are still having to adapt to this. It may seem easier with one lug nut, but there are a lot of things teams have to work on to master the choreography. Drivers are having to be on their toes for the signal to go, and that can be a problem since it takes less time to change tires. Honestly, the penalties now might be a little harsh considering it is new, and going to one lug wasn’t the most applauded move NASCAR has made by a long shot. Now, as we get later into the year and move to next season, penalties should tighten up.

Roller: The penalties are plenty stiff enough, if not too stiff. I’m not completely in agreement that the crew chief and jackman are tossed for four races along with the tire changers. Nevertheless, losing a tire is never good, whether it’s at high or low speeds. I’d like to see NASCAR and teams investigate why tires are not being secured properly and what can be done. Is there a modification to the air gun that can be made to slow the pit stop down, forcing tire changers to take extra time? Or a signal of some sort that the lug nut is completely secured? But that doesn’t change the fact that the penalties don’t need to be stiffened. The issue just needs to be investigated and corrected.

Damcott: If anything, NASCAR should loosen the penalties a little bit. Teams are not at all adjusted to the one-lug wheel, and jackmen are still dropping the jack as if it’s a five-lug pit stop. NASCAR is being too harsh for only being season with the new car and tire. If it continues to happen after this season, then I agree with the four-race suspension. But given that this is the first season we’ve had a one-lug wheel, then a one-race suspension would be more than enough.

Vestal: No. Now if this keeps happening until the end of the year, then yes. People have to remember this is a new racecar, and that these pit crews have been doing the five lug nuts their whole careers. Next year, stiffen the penalty.

Neff: Stiffen?! Hell no, they need to make them less. It is a crappy design and it isn’t carelessness that is causing the wheels to fall off. Until the design is better, NASCAR needs to realize that an occasional errant tire is going to happen. The severity of the penalty was based on a five-lug wheel. This wheel is too easy to have a problem.

On the last lap of the Cup race at Dover Motor Speedway, Martin Truex Jr. spun after racing Chastain hard for many laps. Was either driver at fault or was it hard racing?

Roller: It was hard racing. Plain. And. Simple. It’s the last lap of the race! I expect every driver in a similar situation to Chastain and Martin Truex Jr. to make every attempt to hold their position within reason. And Chastain’s move was well within reason. Truex would have done the exact same thing. He was upset about hard racing, which is getting tiresome.

Damcott: Hard racing. Neither driver did anything wrong, and Chastain certainly didn’t look like he did anything wrong to cause Truex to wreck. All race, those two were fighting hard with each, so something like that was bound to happen. So it’s just hard racing between two competitive drivers and nothing more.

Neff: It was a racing deal. If anything, Truex put himself in an awkward spot. There wasn’t anything wrong on either side.

Glover: That was just hard racing at Dover. No one is going to lift, and Chastain wasn’t the first driver to slide up in front of someone during that race. Every position matters and you never know when that one point gained will come back to help you. In Truex’s case, there is a reason to be upset in the heat of the moment, but it was just an aggressive move that ended with him spinning.

Vestal: That is just two guys flat-out going for the win. Even though Chastain has two and Truex has zero as of now, wins are hard to come by. I like some rubbing and bumping on the final lap. It shows that these guys are not content with what position they are in and still care to win.

See also
Truckin' Thursdays: Who Needs to Shine Over 10 Races in 12 Weeks?

The NASCAR Camping World Truck Series will complete nine races over the next 10 race weekends. Who is one driver you’re watching to see how they handle the bulk of the rest of the regular season?

Vestal: Watch out for Ben Rhodes and his group at ThorSport Racing. They have already locked their way into the playoffs and can gamble a bit more to try to lock up more race wins. That No. 99 Toyota will be surprising a lot of people with how good it will be in this nine-race stretch.

Glover: I’d keep an eye on Zane Smith. With two wins, three top fives and five top 10s in six races, he seems destined to finally go win a title this season after back-to-back runner-up points finishes. Consistency is key in any series, but especially in Trucks, and Smith has shown that so far.

Damcott: I was originally going to say Carson Hocevar, as his first win is not too far away, especially with the return to Knoxville Raceway coming soon. But the driver I’m actually watching, which may seem like a surprise, is Chase Purdy. Purdy actually hasn’t done terribly for a second Hattori Racing Enterprises truck. Sure, he’s 18th in points, but he’s only a little over 60 points behind the 10th-place playoff cutline. And don’t forget that he failed to qualify at Daytona International Speedway because he didn’t have any owner points. Given that the maximum amount of points available in a race is 60, who knows, if he makes the season opener, he’s probably in the mix to make the playoffs right now. Also, 18th in points, even after a DNQ, is pretty impressive. So I’m looking at Purdy as a dark horse as we head into the summer.

Neff: I want to see what Ty Majeski does. He has been in the truck for a bit now. He has shown great skill at local tracks and in some of the biggest races at that level. He can establish himself as a driver that deserves rides up the development ladder if he can notch a couple of wins and contend for the title.

Roller: I’ve got to look at Matt DiBenedetto for the simple reason that he has spent the past several years in the Cup Series, racing 38 weeks between mid-February and early November. The next 10 weeks should be a cakewalk for him mentally and physically compared to his competitors. Can his wealth of knowledge translate to his team during this grind? I’d like to think that DiBenedetto and his Rackley WAR team will see an increased performance by the latter half of this stretch of races. Plus, the regular season will be very close to being over by the time this run of races ends. A golden time to win a race for the Cup veteran.