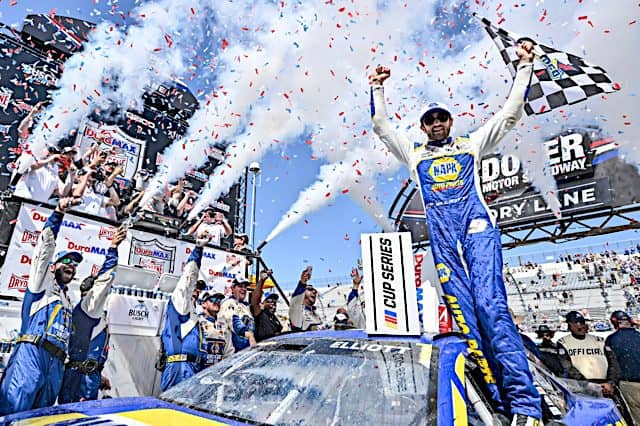 The question has been hanging over Chase Elliott‘s head for a while: when will he win another oval race?

Elliott entered the DuraMax Drydene 400 at Dover Motor Speedway (May 2) on a 26-race winless streak. That all changed following 400 laps at The Monster Mile, as Elliott dominated the late stages to earn his first win of the 2022 season.

Elliott took the lead from the previous week’s winner, Ross Chastain, on a restart on lap 348, and didn’t look back as he cruised to the victory.

“Just had some good circumstances, finally,” Elliott told FOX Sports after the race. “Really appreciate Alan [Gustafson, crew chief] and our entire team for just sticking with it. I’ve had some tough races over the last four or five months. It’s great to get NAPA back to victory lane, great to get Hendrick Motorsports back to victory lane. This one means a lot in a lot of different ways.

"This one means a lot in a lot of different ways."@chaseelliott picks up his first win of 2022 at Dover! pic.twitter.com/riPeTwh3FT

Martin Truex Jr. finished 12th after battling with Chastain for third on the last lap. Chastain slid up in front of Truex, causing the No. 19 Bass Pro Shops Toyota to spin. Both drivers had a discussion on pit road following the race.

The race resumed after 78 laps following the event being postponed from Sunday, May 1m with Larson in the lead. The race went green for nine laps before Austin Cindric spun into the outside wall. As drivers were checking up, Ryan Blaney got into the back of Todd Gilliland and spun him.

Denny Hamlin appeared to have one of the best cars in the race, leading 67 laps in the race. He passed Elliott on lap 112 and held on for the stage victory. Then, the beginning of his troubles struck.

As drivers completed their stops under the stage break, Hamlin drove off of pit road and last his left front tire. That may lead to a four-race suspension for crew chief Chris Gabehart, as well as the jackman and tire changer.

Larson was a front runner for the beginning stages. However, he spun off of turn 4 on lap 156 and was able to keep it off the wall for the most part. Larson lost a lap but regained it soon after.

Chastain took his turn at the lead before Kurt Busch spun into the inside wall on lap 189.

Joey Logano‘s rough season continued when he was hit by Jones on lap 196 and slid into the outside wall.

Hamlin’s fortunes took a sizable hit on lap 242. Cody Ware spun off of turn 4, collecting Hamlin’s No. 11 FedEx Toyota in the process. The crash did in Hamlin’s chances of winning, relegating him to a 21st-place finish, one lap down.

Track position was very important during the race, opening the door for strategy calls. Blaney stayed out during the yellow and assumed the lead with two to go in the stage. The Team Penske driver held off Kyle Busch to earn his fourth stage win of the season.

In the final stage, a duel for the win between Kyle Busch and Bowman appeared to be setting up. However, as both drivers were making green flag pit stops, AJ Allmendinger‘s tire came off of his car, prompting a yellow flag on lap 323. Chastain took over the race lead, as both Busch and Bowman were forced to take the wave around.

Ride with Daniel Suarez for his contact with Corey LaJoie.

Another caution for Tyler Reddick spinning brought a halt to a battle for the lead between Elliott and Chastain with just under 60 laps remaining.

The final restart saw Elliott take the lead from Chastain, with Stenhouse sliding by into second. Stenhouse was never able to get within striking distance of Elliott, as the No. 9 NAPA Auto Parts Chevrolet drove off to the victory.

Elliott’s win means all four Hendrick drivers have reached victory lane this season and gives the organization its 22nd victory at Dover.

The Cup Series returns to action this weekend at Darlington Raceway, with the Goodyear 400 scheduled for 3 p.m. ET on Sunday, May 8.