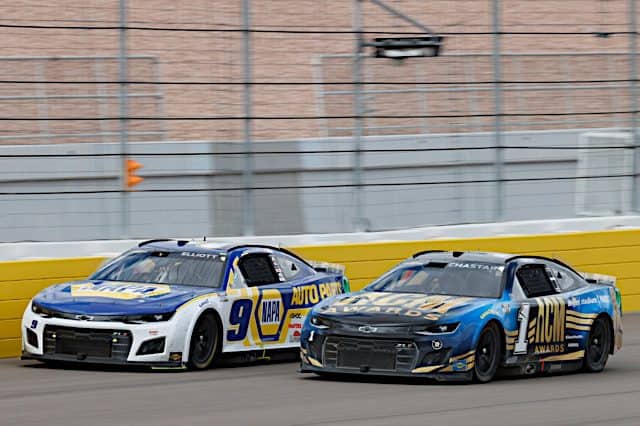 Ten races into the 2022 NASCAR Cup Series season, who would you rather be: Chase Elliott or Ross Chastain?

This early in the year, it is often difficult to pick out a championship favorite. Yet Elliott and Chastain are among a small group of drivers who could legitimately make that claim. Elliott has been the overall points leader since the fifth race of the year, but has not yet scored a win. Chastain has been the biggest breakout star of the 2022 season and is one of only two drivers with multiple wins so far. But Chastain trails Elliott by 76 points, over a full race’s worth, and is only ninth overall in the standings. Even if Elliott and Chastain can both be considered title favorites, their results throughout this season have been complete opposites.

The differences don’t stop there. Elliott is driving for Hendrick Motorsports, arguably the greatest team in the history of NASCAR. Hendrick’s team has a proven history of stability and year-to-year success that no other team in NASCAR today can match. The current Hendrick lineup is a quartet of drivers all under the age of 30. Elliott is not the oldest, but he is the longest tenured of the Hendrick foursome. His Cup Series championship run in 2020 ushered in the new, post-Jimmie Johnson era at Hendrick, solidifying Elliott as a key piece of the team’s future.

Chastain and his team are newcomers to the world of Cup title contenders. Although he made his first Cup start in 2017, Chastain did not have a full-time ride in competitive equipment until joining Chip Ganassi Racing last year. When the upstart Trackhouse Racing Team purchased Ganassi’s operation, Chastain was offered a seat alongside Daniel Suarez. Trackhouse has shown tremendous improvement in its second season while Chastain has taken full advantage of his new opportunity. Even in their first year together, Chastain and Trackhouse look like they can go toe-to-toe with the blue bloods of NASCAR.

So, at this point in the season, who has the upper hand? Is it Elliott, the son of a racing legend with the resources of a super team behind him? Or is it Chastain, the watermelon farmer who clawed his way up the NASCAR ladder and has given a young team such a promising start to its second season?

To see the case in favor of Elliott, look no further than the point standings. The Cup Series and its teams have taken the new car to every type of track at least once, and Elliott leads the way. The No. 9 team boasts a series best average finish of 10.5. Elliott also has seven top 10s, tied with Kyle Busch for the most so far.

Additionally, early season results can be more indicative of playoff success than you might think. In eight previous seasons of the elimination style playoffs, the driver who led the points after race 10 advanced to at least the round of eight seven times and to the championship race four times. Elliott and his team know how to navigate the playoffs, and they will be well prepared to take on the postseason.

That said, it is fair to be concerned about Elliott’s winless drought. The No. 9 team’s most recent win is at Road America, 27 races ago. It is not a long streak in the grand scheme of things, but it’s felt longer because Elliott’s teammates have all won multiple races since then, with Kyle Larson winning the 2021 championship. So far in 2022, none of Elliott’s teammates have matched his consistency, but they have all been to victory lane.

Alternatively, Elliott can crank out quality finishes, but he has rarely been in position to challenge for wins when the time is right. Consider the race at Martinsville Speedway a few weeks ago, where Elliott led the first 185 laps but faded as the night went on and had to settle for 10th. Before that, Elliott had a shot to win at Auto Club Speedway but got forced into the wall by Larson while racing for the lead with 20 laps to go. The No. 9 team clearly isn’t far off the mark, but they need to find a little more speed, and a little more luck, toward the end of races to break the drought.

Chastain certainly hasn’t had any trouble with race-winning speed. He led a race-high 31 laps at Circuit of the Americas, shoving his way past A.J. Allmendinger and Alex Bowman on the final lap to earn his and Trackhouse’s first Cup win. At Talladega Superspeedway last week, Chastain battled back from early race troubles and established himself among the front runners as the laps ticked away. Coming to the checkered flag, leaders Larson and Erik Jones fought to keep the pack in check while the seas parted for Chastain.

With two wins and six top fives in 10 races, Chastain and Trackhouse have become contenders in a season where many questioned whether they could even qualify for the playoffs. Now, they’re virtual locks, and they probably aren’t done winning in 2022.

But what happens when Chastain gets to the playoffs? He has no experience in the Cup Series postseason, nor does crew chief Phil Surgen or any of the braintrust at Trackhouse. The No. 1 team is building a reputation on defying expectations, but we have seen time and time again that the playoffs favor veteran drivers with battle-tested teams. In a world where you often have to lose one before you can win one, where does that leave Chastain, who has never even been in the conversation for a Cup title until now?

Furthermore, Chastain and the No. 1 team’s off days tend to be way off. In the four races this season where he did not score a top five, Chastain has three finishes of 29th or worse. Not all of those bad results were his or his team’s fault, but the feast or famine nature of the season has prevented Chastain from solidifying a top 10 points position.

Remember, the top 10 positions pay out extra playoff points at the end of the regular season, and those points will be critical for playoff survival.  It seems inevitable that the No. 1 team will have a bad race or two in the playoffs, and they may have to hope that such a race does not destroy their title hopes.

In many ways, Chastain’s strengths are Elliott’s weaknesses, while Elliott’s advantages are Chastain’s disadvantages. But in terms of their championship potential this year, does one of them really have it better?

If we are talking strictly about who is more likely to win the championship, it has to be Elliott. His experience, consistency, and backing from Hendrick Motorsports will be great assets in this year’s postseason. Yet if we are asking who has had the more impressive season, that’s Chastain. He and Trackhouse have clearly been punching above their weight and defying the odds for such a new team.

Seeing Elliott in title contention is to be expected. For Chastain, even a championship run that falls short is still a great outcome to what has been a fantastic start to 2022.