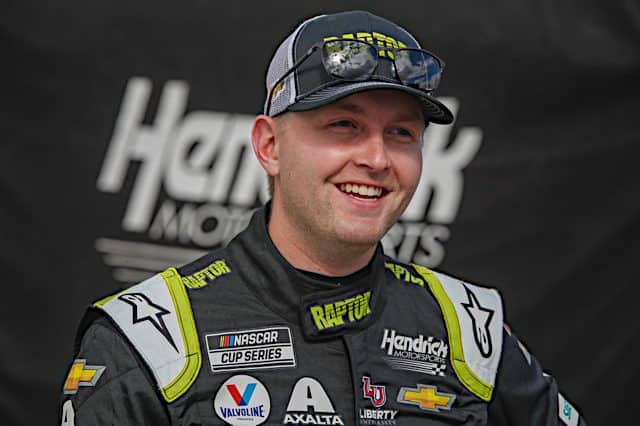 The NASCAR Cup Series travels from one monstrous racetrack in Talladega Superspeedway to another, taking on Dover Motor Speedway (the Monster Mile). Let’s prep your daily fantasy NASCAR DraftKings rosters for the DuraMAX Drydene 400, airing Sunday, May 1 at 3 p.m. ET on FOX Sports 1.

After a couple of somewhat unpredictable racetracks (Bristol Motor Speedway dirt track and Talladega), drivers are ready to take on a more “normal” oval in Dover. They’ve run at three paved courses one mile or less in length this season: Phoenix Raceway, Richmond Raceway and Martinsville Speedway. But it’s the first trip to the Monster Mile for these Next Gen cars.

Each of these races saw two drivers lead over 100 laps, which is typically what happens at Dover as well. So for daily fantasy (DFS), you’ll want to have dominators in your lineups — drivers with fast cars who can be out front.

Just don’t forget about value plays that can gain positions on the racetrack. Choosing the right ones can help you win big.

See also
NASCAR 101: A Dover in Decline, Yet Still With Memorable Moments

For example, in last year’s race, Alex Bowman won as Hendrick Motorsports swept the first four positions. Who else was in the perfect lineup but three Hendrick drivers: Kyle Larson, Bowman and Chase Elliott. Daniel Suarez and Cole Custer were also there, as they moved up several spots on the track into top-10 finishes.

But the final one in the perfect lineup (according to Linestar)? Quin Houff, a driver who rarely cracked the top 30 during a two-year tenure with now-defunct Starcom Racing. It just goes to show you that you can mix a driver in the back of the field with dominators up front and win your contests, so long as you have people who are gaining positions throughout the course of the race filling out the roster.

Before I share which drivers I’m thinking about this week, let’s look back at what happened at Talladega.

Let’s just say, if there was a contest for the lowest score, this would be near the top. ‘Dega was pretty unpredictable, though drivers like Corey LaJoie and Michael McDowell finished in the top 15. However, Denny Hamlin ran out of fuel, Brad Keselowski sped twice on pit road while Chris Buescher and Ty Dillon were taken out in crashes. C’est la vie.

Now, on to my DraftKings picks!

DraftKings knew Hendrick was good there last year and priced all four drivers over $10,000. I originally wanted both Larson and William Byron, but had to make some adjustments and decided to keep the latter on my roster.

Byron’s had some good races at Dover, earning back-to-back fourth-place finishes the last two events. He also led 21 laps in 2021, though that was small potatoes compared to his teammates. Additionally, in the spring 2019 event, he came home eighth.

If you’ve been following the Cup Series this season, you know that the No. 24 is one of two cars with two victories so far. Byron won at Atlanta Motor Speedway and Martinsville, leading 212 laps in the latter event. He also led 122 circuits at Richmond before crossing the line in third. That short track success leaves Byron with the potential to be out front again, racking up DraftKings points.

It will be interesting to see how Kevin Harvick performs at Dover, a place where he’s run well of late. In each of the past seven races there, he hasn’t finished worse than sixth. Two of those were victories, in spring 2018 and the second race in 2020. Plus, he held the lead for 223 circuits en route to his last Dover victory.

But this season, the No. 4 Stewart-Haas Racing pilot has only led 12 total laps thus far, with 11 coming at Atlanta. While he hasn’t shown the speed like a nine-win season in 2020, Harvick’s still earned one top five and four top 10s, including a runner-up performance at Richmond. Harvick placed sixth at Phoenix as well, so he seems to be fairly comfortable on the smaller courses in the Next Gen car.

Look for The Closer to continue his Dover streak by closing out another top 10 this weekend.

Chastain is the other driver with two victories this year, as he earned the win at Talladega last week. Although that success came at longer racetracks (his first was at Circuit of the Americas in March), he’s still performed well at almost every other track type.

He drove the No. 1 Trackhouse Racing Team car from 27th to fifth at Martinsville, logging 17 fastest laps in the process. Also, at Phoenix he gained 15 spots en route to a runner-up performance. Both of these runs helped him score over 60 points on DraftKings.

Unlike his teammate, Daniel Suarez has yet to win his first race at Trackhouse. Lately, he hasn’t looked as good the past several weeks. That doesn’t mean the No. 99 hasn’t had speed, as Suarez posted 19 fastest laps at Martinsville.

Though the Mexican native has struggled, he did finish ninth at Phoenix after starting 23rd, which produced a good score on DraftKings. Suarez also led 64 laps at Bristol dirt, boosting his DraftKings total to 59.2.

And at Dover, he started off with four consecutive top 10s during his tenure driving the No. 19 Toyota with Joe Gibbs Racing. Last year, in his first season with Trackhouse, Suarez drove the No. 99 from 24th to ninth, earning his first top 10 at this track since 2018. I think he’s capable of doing that again, but even if he doesn’t, a good fantasy DraftKings score is still possible.

Dillon’s trips to Dover have been about average; he was 14th in this event last season. But two of his top 10s have come within the last six races: a seventh in fall 2018 and ninth in the second race of 2020. Plus, in the first 2020 event, Dillon led 49 laps before ultimately taking the checkered flag in 15th.

The No. 3 Richard Childress Racing driver has three podium finishes (or four, if you count the Busch Light Clash at the Coliseum) as well as five top 10s so far. Dillon was second last week at ‘Dega after beginning the race 14th. But at Martinsville, he really showed speed, notching 35 fastest laps and advancing 20 positions on the way to third place. He also earned a 10th at Richmond.

Dillon should earn another strong finish, at least a top 15 or 20, perfect for the back end of your fantasy DraftKings roster.

This is Justin Haley’s first trip to Delaware in the Cup Series, but he does have a top five and two top 10s in the Xfinity Series. In the fall 2019 race, he went from 11th to fourth; the following year he finished eighth, 14 positions further up from where he began.

The No. 31 Kaulig Racing driver hasn’t had the same luck this year in Cup, as he’s yet to earn a top 10. However, he’s finished 17th or better in six of 10 events. One of those times was at Phoenix, when he drove from 28th to 17th, scoring 37 fantasy points on DraftKings. Haley won’t have much time to get used to the Next Gen car at Dover before the race, but he’s very inexpensive and would help you fit drivers like Larson in your lineup.

Be sure to check practice and qualifying results to see how he adjusts to the Monster Mile.