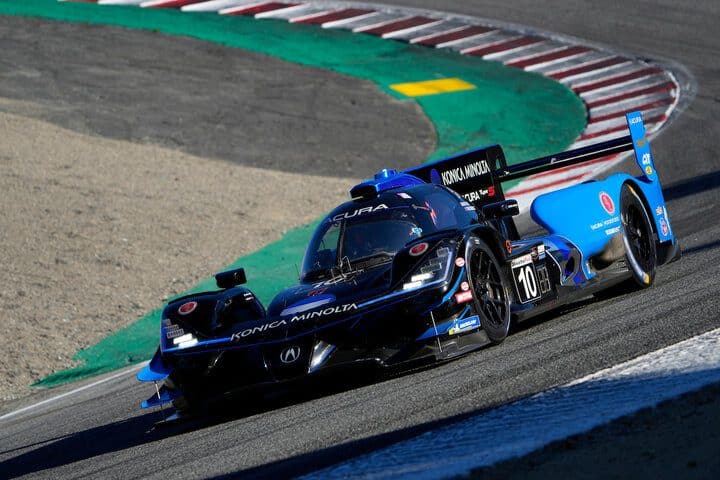 For this weekend’s IMSA WeatherTech SportsCar Championship Hyundai Monterey Sports Car Championship at WeatherTech Raceway Laguna Seca near Monterey, Calif., there are 32 teams entered for the first full-length sprint race of the year.  This event will be contested by the DPi, LMP2, GTD Pro and GTD classes.

In the DPi class, not much has changed from Long Beach.  There are six teams entered, four with Cadillac DPi-V.R.s and two Acura ARX-05s for Wayne Taylor Racing and Meyer Shank Racing with Curb-Agajanian.  There are no driver changes this weekend, but the Acura teams should be on the upswing with the streets in the rear view mirror.

“Laguna is a track that suits our car,” Ricky Taylor stated in a press release Monday.  “Its smooth surface and medium to high-speed corners play into the strengths of the ARX-05.  Laguna favors track position, so we will place a big emphasis on qualifying well.  Strategically, this race always seems quite unpredictable and normally offers multiple strategy options, so executing well on our decisions will be important.”

In LMP2, there are six teams entered for the first sprint race of the year for the class.  United Autosports and Racing Team Nederland are not entered as they are confirmed only for the Michelin Endurance Cup races.

The biggest change here is at PR1 Mathiasen Motorsports.  The team has a completely different driver lineup in the No. 52 for the sprint races as compared to the endurance events.  As a result, Ben Keating, Mikkel Jensen and Scott Huffaker are out.  They will be replaced by Patrick Kelly and Josh Pierson.  Kelly raced full-time for the team in 2020, winning the LMP2 championship and earning a seat at Le Mans.  Unfortunately for Kelly, the car that he shared with Gabriel Aubry and Simon Trummer dropped out in the 20th hour.

An electric issue cut our hopes short today. Our mechanics and engineers did their best to fix it, however unfortunately, we have retired from the race.#LeMans24 was an EPIC EXPERIENCE for us, we are so grateful for it.

Thank you all for your support! 🙏🏻

Pierson moves over to the No. 52 after sharing the No. 11 at Sebring with Jonathan Bomarito and Steven Thomas.  He is the youngest driver in the field at 16 and is still working up to his scheduled debut at Le Mans in June.

The GTD Pro class has the same six teams entered that raced earlier this month at Long Beach.  The only driver change in the class is that Daniel Juncadella will partner up with Cooper MacNeil in place of Raffaele Marciello.  Juncadella previously drove the No. 97 Mercedes at Daytona back in January.

The GTD class has 14 teams entered this weekend, the same number as in Long Beach.  However, two of the teams on the grid back on April 9 will not race.  One is Gradient Racing, which finished second in class, is not entered.  Long Beach was a last-minute addition to Gradient’s schedule (the original plan was to only run the endurance races).

The other team that won’t be at Laguna Seca this weekend is Crucial Motorsport.  This will leave only one McLaren on the grid for Inception Racing.

Meanwhile, Alegra Motorsports, which skipped Long Beach, will be back on the grid this weekend.  Michael de Quesada and Daniel Morad will drive the team’s Mercedes.

As previously announced, NTe Sport will be back on the grid as well after being forced to miss Long Beach due to transporter issues.  More on those issues in the linked article below.  Marco Holzer will join the team in place of Don Yount to make his first IMSA start since 2015.