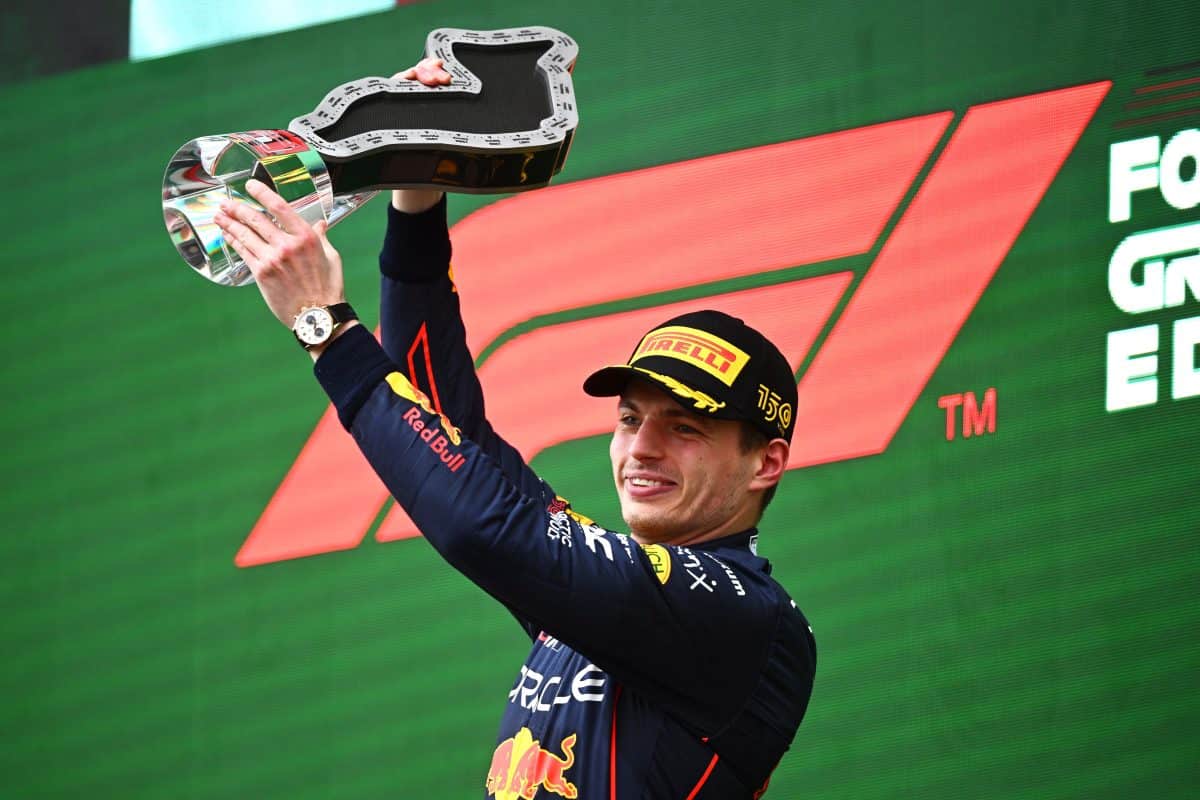 Max Verstappen scored his second win of the 2022 season at Imola Sunday (April 24) in seeking to defend his Formula 1 championship. In doing so, he made huge gains on Charles Leclerc and Ferrari less than 60 miles away from the prancing horse’s headquarters in Maranello.

It was the 22nd win of Verstappen’s career and the second Grand Chelem of his career, after his first at Austria last year.

Verstappen held on to the lead at the start of the race as Leclerc fell from second to fourth behind Sergio Perez and Lando Norris. Leclerc was able to eventually get by Norris, but was unable to pass Perez or get close to Verstappen as the race unfolded.

On lap 54, Leclerc, just a handful of laps after pitting for soft tires, spun out into turn 15 after hopping the sausage curb entering turn 14. Leclerc was able to continue on to the pits, but instead of finishing third, he wound up sixth.

Perez and Norris finished second and third, respectively, giving Red Bull a 1-2 finish for the first time since 2016. George Russell gained seven spots from his starting position to finish fourth while Valtteri Bottas came up fifth after battling with Russell late in the going.

Behind Leclerc, Yuki Tsunoda had a great day and finished a strong seventh. Sebastian Vettel got Aston Martin their first points of the season with his first finish of the year in eighth. Haas F1 Team scored a couple of points ahead of their home race in two weeks at Miami after Kevin Magnussen brought home ninth, while Lance Stroll ended the day in 10th.

It was an awful day for Lewis Hamilton who started 14th, spent almost the entire race stuck behind Pierre Gasly, and finished 13th, one lap down.

The race started under wet conditions but despite threatening clouds overhead throughout the race, the track eventually dried out with no rain. DRS was not enabled until lap 31; several observers (including the Sky F1 broadcasting team) claimed it could have been activated a handful of laps earlier than it was.

Once again, Carlos Sainz found problems in the opening stage of the race. The Spaniard and Daniel Ricciardo collided and spun out into the gravel in the second turn of the event. No penalties were given to either driver, as stewards determined it was a racing incident that did not require further investigation.

Sainz was unable to continue, the second straight DNF for the “Smooth Operator.”

Mick Schumacher also went off track in the same incident and was able to trudge onward, albeit dropping seven positions in the process. (He wound up 17th).

As far as the season-long driver standings, Verstappen is still 27 points back from Leclerc while Perez has stepped up to third place. Meanwhile, over on the constructor’s side, Ferrari clung to its lead over Red Bull 124-113, while Aston Martin got on the board with four points and ahead of Williams for ninth.

The next Formula 1 Grand Prix will be in Miami in two weeks’ time. The event on Sunday, May 8 will be televised on ABC at 3:30 p.m. ET.