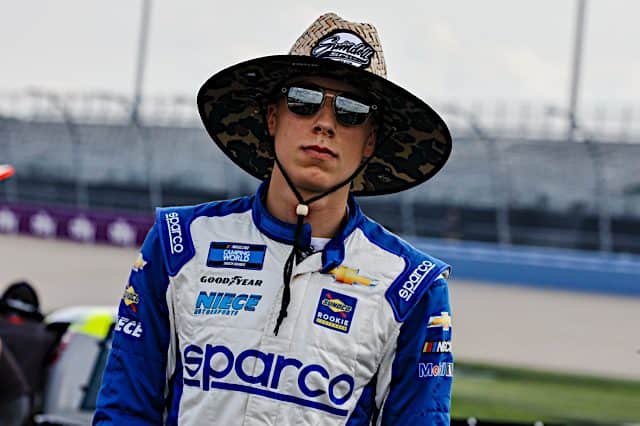 He took lead at the end of stage two when others ahead of him pit during the stage break. But what’s more important is Hocevar held that top spot through four restarts, despite being challenged multiple times by John Hunter Nemechek.

But that’s where Ben Rhodes comes in. After leading stages one and two flag-to-flag, Rhodes was forced to pit at the end of stage two and relinquished the top spot. Restarting 13th after that pit stop, the driver of the No. 99 Toyota had to work his way through the field to make up for his mistake in not pitting at the end of stage one as was the original plan.

“My crew gave me such an awesome Tundra this weekend that I wasn’t going to let them down,” Rhodes said after the race. “I had to go back up there and earn the spot back.”

And that’s exactly what Rhodes did.

On a restart with just five laps remaining, Rhodes mounted the challenge and took the top spot from Hocevar and didn’t look back, taking the victory by almost a full second.

Hocevar walked away heartbroken with a second-place finish.

“I could’ve cried. I knew I was going to cry whether I won or lost,” Hocevar said when asked about hanging his head after getting out of his truck. “It’s a pansy thing to do, but this sport’s hard and you don’t have those close moments too often.”

The runner-up result matched his career-best finish that came at Charlotte Motor Speedway last season when he ultimately ended up second to Nemechek in a race where he was gaining on the leader in the closing laps.

But despite leading a career-high 55 laps, Hocevar just didn’t have enough for Rhodes on that final restart. Perhaps he could have made a move similar to the one Chase Briscoe made on Tyler Reddick on the white flag lap in the NASCAR Cup Series race Sunday night (April 17).

Ultimately, Hocevar simply didn’t have what he needed to compete with Rhodes for the win.

“I mean either ripped the top or crashed him,” Hocevar told Fox Sports 1 after the race. “I hate saying that, but it’s part of this racing, right? I couldn’t really compete with him. He just had better tires and he was the fastest truck all day.

“Second just sucks. It’s terrible… especially with being that close.”

Before Ross Chastain‘s victory at Kansas Speedway in 2019, Niece Motorsports was – and probably still is – an afterthought when it comes to a race-winning team. But that season, Chastain officially scored three wins, and it was four if you count the one where he crossed the finish line first at Iowa Speedway but was disqualified because the truck failed post-race inspection.

Since that season when Chastain made it to the Championship 4, Niece hasn’t exactly been running championship-caliber equipment, but Hocevar has made the most of his time behind the wheel, often outperforming the equipment he’s in, even if the results haven’t always shown it.

The bad news for Hocevar? He gets to spend the next two weekends wondering what might have been if he’d been able to hold off Rhodes or get that top spot back again. The good news? He’s proven he’s got the talent to lead races and compete for the win. It’s just a matter of putting a full race together and hanging on through the checkered flag.

Make no mistake… Hocevar will find his way to victory lane. It’s just going to sting a little for him to swallow those losses until he makes that breakthrough.

Big trucks and big numbers. 📈@NASCAR_Trucks viewership from Bristol Dirt on @FS1 was up +87% over the 2021 race, averaging 1,167,000 viewers and good for the seventh-most-watched Truck Series race ever on FS1. pic.twitter.com/HvNMxUUcEw

“It’s definitely going to be exciting,” Smith said. “The experience just being able to come up and do a longer race and have more pit stops with a different car instead of a truck is going to be all in all a lot different than what I’m accustomed to. I’m really looking forward to the challenge. It’s big for me to join Sam’s team. SHR is still kind of a smaller team. They are still learning a lot and in their baby years, and I feel like I may have a little bit to bring to the table myself to help them excel and to bring a new aspect to the team. Hopefully, I can be an asset and help a little bit with their development and growth. I can’t wait to be a small part of this team’s huge success as it continues to grow.”