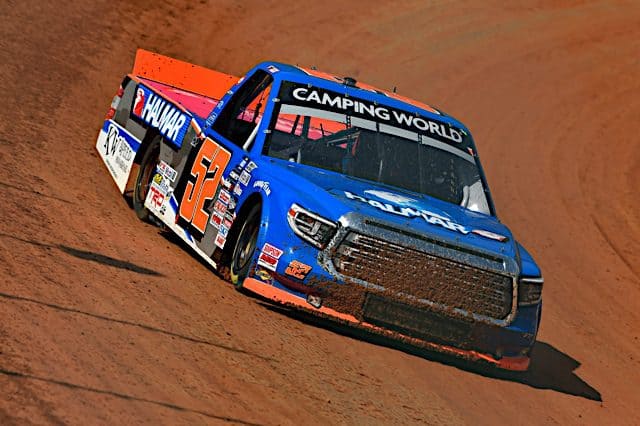 The first NASCAR Camping World Truck Series practice session at Bristol Dirt featured the fastest laps of the day, as Stewart Friesen topped the field with a speed of 92.932 mph in the first session.

Friesen picked up his first Truck Series win on dirt at Eldora Speedway in 2019, and he will look to add a second trophy to his collection tomorrow night (April 16).

Defending Truck Series champion Ben Rhodes had the second-fastest time in the session, while Derek Kraus, Carson Hocevar and Matt Crafton rounded out the top five.

The second session saw new names up front, as Logano record the fastest time with a speed of 91.006 mph.

Logano was the winner of the inaugural Cup race at Bristol Dirt, and he will look for his second Truck Series win while prepping for the Cup race on Sunday night (April 17).

Just as he did in the first session, Rhodes had the second-fastest time in session two. In addition, Rhodes also had the fastest 20-lap average of any driver in the final session.

Crafton had the third-fastest time in the final session, while dirt ringer Buddy Kofoid and Elliott rounded out the top five.

Chandler Smith and Grant Enfinger were sixth- and seventh-fastest, respectively, while Majeski, Christian Eckes and Matt DiBenedetto completed the top 10.

Friesen, who was fastest in the first session, struggled in the second, posting just the 34th fastest time out of 37 trucks.

Both practice sessions featured multiple spins, with one major incident in each. Deegan hit the wall in the first session, and she will have to go to a backup truck after the team was unable to repair the damage. In the second session, a spin by Jack Wood caused a logjam where Kaz Grala ran into the back of Youngs Motorsports teammate Austin Dillon. Grala will go to a backup car; the team is currently assessing the damage to Dillon’s truck.