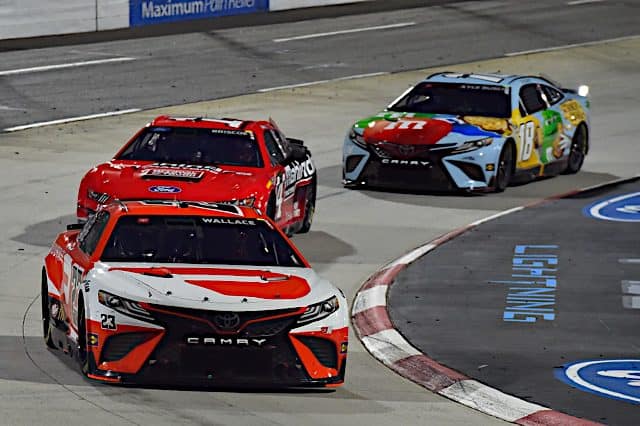 William Byron won both the NASCAR Cup and Camping World Truck series races at Martinsville Speedway. Which Cup driver would benefit from competing in a few races in either the NASCAR Xfinity or Truck series?

Anthony Damcott: It’s hard to say due to the Next Gen car just being so different from an Xfinity car or a truck. But it wouldn’t hurt for rookies to run lower series races at tracks they’ve never been to before, just to get track time. For example, Harrison Burton is running the Bristol Motor Speedway Truck dirt race because he’s never competed there before. That valuable track time will help him not be completely lost in the Cup race, even though the cars are vastly different.

Brad Harrison: One of the most inopportune occurrences in NASCAR this year is the absence of Team Penske’s Xfinity team. With it around, it’d be a boon for both Austin Cindric and Burton in getting track time. It’s even harder for Burton this year to transition from the Toyota side of things with Joe Gibbs Racing to Fords with Wood Brothers Racing. When you are looking to get experience, there is nothing like seat time, and both Cindric and Burton could use it during their transition to NASCAR’s top level.

Mike Neff: Most every driver can benefit from time in the seat. Even the old guard that has been at this for decades can pick up some pointers turning laps in the lower series on a race weekend. That said, the greatest benefit will be for the youngsters in the field. Tyler Reddick, Cindric, Chase Briscoe, Burton, Todd Gilliland and Justin Haley all come to mind as drivers with the least amount of seat time accumulated so far. More laps on any race weekend would be beneficial.

Jared Haas: Momentum is a big factor in racing, as it can turn around someone’s season. Sitting 28th in points, Ricky Stenhouse Jr. had bad luck at Daytona International Speedway and Atlanta Motor Speedway and disappointing runs at Richmond Raceway and Martinsville Speedway. Stenhouse has not driven in the lower series since the fall Xfinity Phoenix Raceway race in 2016. With no teammates to lean on for information at JTG Daugherty Racing, additional track time for Stenhouse should boost the confidence of the No. 47 team.

Martinsville’s Cup race produced zero green-flag passes for the lead. What can be done with the Next Gen car to produce better racing at the track going forward?

Harrison: First of all, end this infatuation with making an event a night race and magically expecting excitement. The racing over time has not needed laps after dark alone to make it exciting, and it does the drivers a disservice to insinuate that only racing at night can result in an exciting product. In addition, running at night in early April is usually a recipe for the cold. Multiple tracks with lights host races in the spring, and very few run the full length at night, and there’s a good reason for that. Hopefully between now and October, info gained during test sessions and perhaps this summer at New Hampshire Motor Speedway will provide a better product this fall at Martinsville. If not, this new car will be the epitome of unintended consequences.

Haas: A few factors led to the racing that happened last weekend at Martinsville. The tires did not wear in cold weather. With the tires not laying down on the track, the racing did not go through its phases of a green track to a track with rubber on it. Races become dynamic when the track goes through changes. Teams have to adjust to a changing track with some teams keeping up, while others fall behind, which could include the most dominant driver. When the track does not change, the battle for the lead is less likely to happen. Plus, the speed of the cars was too similar. Two prime examples were Denny Hamlin and Cole Custer. Hamlin qualified poorly and could not gain ground in traffic, which was an issue at Phoenix, and never recovered and finished 28th. Custer was a top-five car for the majority of the race, yet a penalty caused him to be mired in traffic and he finished a lap down outside the top 20.

Luken Glover: It is too early to panic. The Next Gen was not going to be flawless from the get go, especially only eight races in. Is there cause for concern on short tracks? Yes, but it can be handled properly if dealt with soon enough. The main things that may help the performance are raising the horsepower and going with a softer tire compound. There was hardly any wear with the left sides in the race. Part of that was the fact that it had rained and it was hovering around 40 degrees. Another factor was the amount of shifting. Shifting adds a compelling challenge, but there is no need to shift four times a lap. Richmond had a good amount of shifting as well. Things like these need to be dissected in order to improve the racing.

Dalton Hopkins: What CAN be done? I don’t envy NASCAR here. We have seen some great racing come out of this new Next Gen car and with all of its sliding, hard-to-drive goodness. I don’t want to see many changes to it. But it’s clear that after Martinsville, we could be seeing the early signs of short-track racing issues. That’s going to be a massive no-no in the world of stock car racing. We NEED short tracks on the schedule. Without them, we lose much of the sport’s identity. At the same time, we need a car that can perform on them. So do we make these changes to the car at the risk of making racing at other tracks worse? That’s not even mentioning the issue of the ongoing parts shortage. Mechanically, it’s a conundrum. It’s time for the leaders of NASCAR to sit down with the drivers and ask them what they need.

Of the four Cup newcomers this year — Burton, Cindric, Haley and Gilliland — Cindric is the only one inside the top 20 in points, winning the season-opening Daytona 500. Which of these drivers’ struggles surprises you?

Neff: None of them. They are rookies in the Cup Series. Burton might be a small surprise being behind Gilliland and Haley, but that isn’t really shocking. They are learning their way in a brand-new car in a brand-new series for them.

Stephen Stumpf: None of them. The days of rookies immediately coming into the Cup Series and winning are over, and we have seen the breakout stars of the 2010s and 2020s have a gradual rise to the top of the sport. Therefore, it should not be a surprise to see any of them struggle. Gilliland is 21 years old and jumped straight from the Truck Series to Cup. Burton is also 21 years old and driving for a team that hasn’t won a Cup race since 2017. Haley is driving for a team that is new to full-time Cup competition, and he has shown some improvement over last year with four top-20 finishes in the first eight races. And Cindric has shown flashes of brilliance, even if he’s not getting consistently good finishes. He was one of the best cars at Circuit of the Americas, and he rebounded for a top-10 finish after a late race spin. All of these drivers require patience and experience to perfect their craft.

Phil Allaway: None of them, really, but Burton’s the closest. He is with a stronger team than Gilliland or Haley. With Matt DiBenedetto, the Wood Brothers had multiple top-five finishes in recent years and been an outside threat to get into the playoffs. With Burton, they’ve had a lot of bad luck, such as the roll in Daytona, but outside of bad luck, he has been really mediocre and seemingly a downgrade over keeping DiBenedetto. Ultimately, Burton will get more used to racing in Cup as the year goes on, but if he doesn’t improve, Burton’s time in Cup will be quite brief.

Damcott: I expected Haley to perform a lot better than he currently is. He has the most Cup experience of all the new full-time drivers with 36 starts, including two with the team for which he’s currently driving, Kaulig. He’s made enough starts to the point where he cannot compete for Rookie of the Year this season. Some of his struggles can be attributed to the new car, as well as crashing out of events (whether it’s his fault or not), but both Haley and Kaulig have been successful in Cup prior to this year. While they are still second of the four mentioned newcomers in regards to points, it’s still surprising that Haley has been struggling with a team like Kaulig, especially given that he’s driven for them for years in the Xfinity Series. Plus, Kaulig has shown speed in the Cup Series at times, with AJ Allmendinger nearly winning Circuit of the Americas in the team’s second entry.

Will one of the Cup drivers entered in the Bristol dirt Truck race win the event this year? If not, then who?

Allaway: None of them will do it.  The Truck Series is full of strong racers, and they’re going to give Austin Dillon, Joey Logano, Chase Elliott and Burton the business.  That said, I’d be shocked if two of them weren’t up in the hunt toward the end of the race.  I’m thinking Ben Rhodes wins.

Hopkins: There’s no doubt Logano is the favorite. From what we saw last year, it’s clear the Connecticut native that grew up racing short track late models and legends cars has a knack for dirt racing. Last year, Martin Truex Jr. made only his third Truck start and first since 2006. He dominated; even on the dirt, even with very little Truck experience, the Cup guys truly are the favorites. There’s also Elliott. Spire Motorsports has shown it is force to be reckoned with when it has Hendrick Motorsports guys behind the wheel. Let’s put it this way: William Byron has been racing the late models on short tracks and winning. He won the Truck race at a short track. Elliott has been racing the midget cars on dirt tracks and winning in heats. You fill in the blank.

Stumpf: I like Elliott’s chances. The Spire Truck team has been stout when Hendrick drivers run its No. 7, so Elliott will probably have one of the best trucks in the field on Saturday night. That said, he is not the overwhelming favorite as Logano will be right there with him. If a Truck regular wins the race, I’d put money on Chandler Smith. Smith led a race-high 71 laps at Knoxville in 2021, so he already has success with dirt track racing in the series. And given his excellent finish to 2021 and his red-hot start to 2022, he too will be tough to beat.

Glover: I’m not near ready to pencil a Cup guy in as the winner, but Elliott should be a favorite. He’s expanded his horizon by racing in other series, which has garnered him a valuable amount of dirt experience in the process. Plus, the truck he’s racing won with Byron a week ago, though that was a completely different surface. Still, Elliott should be someone to keeps eyes locked on during the race.