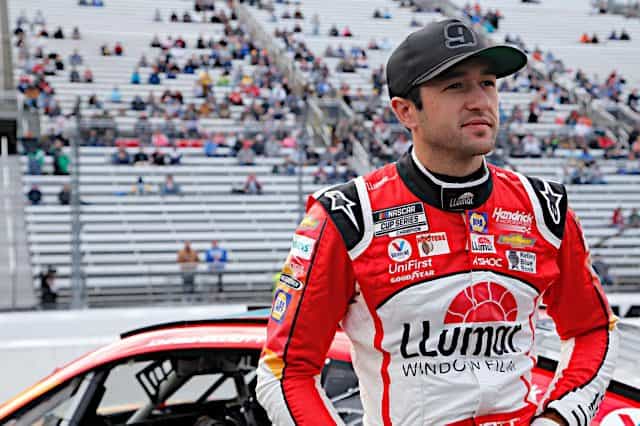 Martinsville is much tighter than Richmond Raceway, as it’s just 0.526 miles long and is shaped like a paperclip. With these closer confines, cars will almost certainly bump each other in one way or another. As Denny Hamlin once said (when he mocked Joey Logano), “It’s short-track racing.”

One thing you should note is that the Cup race is 100 laps shorter than what it had been in previous years. A shorter race means fewer laps available for a driver to lead (sorry Brad Keselowski, you won’t be able to lead 446 laps this time!).

But 400 laps is still a lot, and whoever gets out front often tends to stay there for long lengths of time. So you’ll still want some dominators in your DraftKings lineups. The key is to pick the right ones.

Also, sometimes drivers won’t qualify as well but will make up for their poor start on the racetrack, either through attrition or good pit strategies. These will help boost your DraftKings scores as well.

Before I move on to my picks for this week, let’s review the results from Richmond Raceway:

On paper, this actually wasn’t a completely terrible lineup. It just didn’t win anything. Ross Chastain‘s strong streak came to an end, as he finished 11 spots worse than where he started. Also, Justin Haley was the wrong value play this time, as the Roush Fenway Keselowski Racing cars performed much better this week.

In the $1 double up contest, 300.7 points were needed to cash. In contrast, the top score in the $1 Happy Hour tournament was 378.5 and it had William Byron, Christopher Bell, Ryan Blaney, Alex Bowman, Keselowski and Austin Dillon.

Chase Elliott may not have won yet this year, but he has a lot of things going for him this week. He won the pole, posted the fourth-quickest 10-lap average in practice and topped the charts in single lap times. He has four top 10s so far this year, including a fourth-place at Circuit of the Americas. It looked like he had a strong car at Phoenix Raceway as well, logging 36 fastest laps and leading 50. Though he ultimately came home 11th, his practice speeds at Martinsville indicate that he’ll be out front early and often.

The No. 9 Hendrick Motorsports driver earned his lone Martinsville victory in the fall 2020 race after leading 236 laps. The following year he was on point for 289 circuits but finished a disappointing 16th. However, Elliott was runner-up last spring.

Don’t worry about his salary either, as he should still perform well if he stays out of trouble.

Byron was also quick in practice, posting the second-fastest average over 10 consecutive laps. Plus, he won the NASCAR Camping World Truck Series race Thursday night at the Paperclip.

Elliott’s teammate also did well last week at Richmond, leading 122 laps en route to third place. This resulted in a high score of 84.5 on DraftKings. And before the season started, Byron finished sixth in the Busch Light Clash at the Coliseum, another really short racetrack (that was on a football field).

Byron’s done well at Martinsville too; he was fourth and fifth in last year’s spring and fall races, respectively. He crossed the line in second in fall 2019 and was eighth in June 2020. Though his salary is the highest it’s been in three weeks, he’s still one of the first ones you should consider for your lineups.

Bell is a little riskier for $9,100, especially since he’s starting inside the top 10, but I’m still considering him for Saturday night’s race at Martinsville. For one, he brought home a sixth-place at Richmond last Sunday, leading 63 circuits during the event. The laps led, combined with the 19 fastest laps and sixth-place finish, increased his fantasy score to 65.3 on DraftKings.

He doesn’t have a whole lot of Cup experience at Martinsville but everyone is still getting used to the Next Gen cars this season. He did take the No. 20 Joe Gibbs Racing car to seventh in this race last year after starting 23rd.

Hopefully, Bell can record a lot of fastest laps and score another good result this weekend.

Aric Almirola also qualified in the top 10, but he had some fast lap times in practice and should (hopefully) get a good finish. Though he was 11th fastest among those who ran 10 straight laps, he was eighth quickest overall.

The No. 10 Stewart-Haas Racing Ford started the season off with three straight top 10s but hasn’t finished in the top 10 in the last four races. Still, Almirola has done well recently in some Martinsville events.

In last year’s playoff race Almirola went from 23rd to sixth. He was seventh in fall 2020 and ninth in the spring 2019 race. However, he won’t get as many DraftKings points this time around for position differential. If he stays near the front of the field and keeps his car clean, it would produce a much better fantasy score than what he has these last few weeks.

Yes, once again we have another driver who had a fast car during his practice session. Bubba Wallace was sixth quickest during one of his 10-lap runs and third on the leaderboard for single-lap times. But unlike those above, he didn’t have as good of a qualifying run as he wanted. He’ll start 21st, so if Wallace shows the same kind of speed that he did in practice, he’ll be up near the front by the race’s end.

Wallace hasn’t broken the top 10 yet at the Paperclip but he was 11th in June 2020. In this event last season, he crossed the line 16th after beginning 25th. Sometimes that’s all you really need for a driver with this salary.

I actually liked the rookies heading into this weekend, as both Todd Gilliland and Harrison Burton won at Martinsville in the Xfinity and Truck series. However, Gilliland is starting 10th, which is too high for me to take a chance on. Meanwhile, Burton is at the opposite end of the lineup, all the way back in 29th.

So why did I pick him? Well, for one, he’s super inexpensive on DraftKings, which helps you fit the top-tier drivers in your roster. But like I said, the No. 21 Wood Brothers Racing pilot won at the Paperclip in 2020 after leading 81 laps. He looked to be in contention for the lead last fall as well but was shuffled out of line on a restart when a slower car restarted on the front row. He avoided the mayhem that came later, but couldn’t avoid running into a spun Ty Gibbs and ended up 20th.

He likely won’t lead a lot of laps (if any), but if he can gain some positions on the racetrack, he’ll do just fine for DraftKings.